The joy of steel toecapped boots. 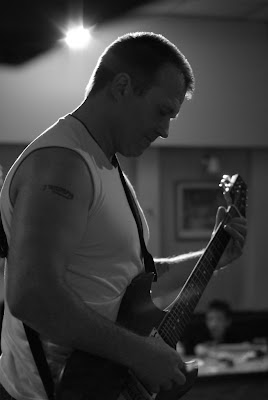 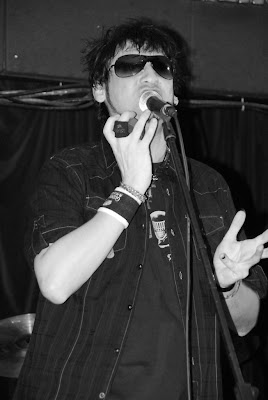 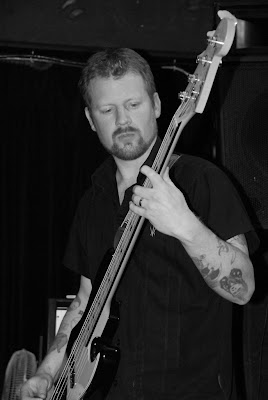 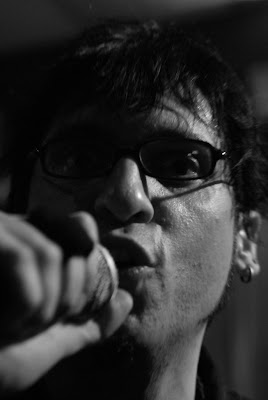 As you can see from my feeble attempts at some arty black and white photos above, Ian's band Xenon played at the Erith Working Man's Club last night. Click on any photo for a larger version. A really good gig and a pity a few more people did not turn up, as they would have had a cracking night. You can see all of the photos I took - both black and white and colour here.

I had an encounter with a couple of teenaged Chav girls on the 99 bus from Plumstead yesterday. I got on and walked to the back of the lower deck to find the two playing very loud sounds (I won't dignify sub Crazy Frog helium induced drum and bass with the dignity of being called music - it sounded like the person on the mixing desk had recorded themselves during an epileptic fit). Anyway, I politely asked the two to use headphones or turn the noise off. They started sneering and giggling (difficult to do at once, I would think) and after I then informed them that failure to comply was a criminal offence under the 1990 Public Transport Act, and that not only could they get a criminal record in the unlikely event they did not already have one, but they would also get a mandatory £500 fine. Resentfully they turned the volume down, but not quite off. As I was with my Mother, I left it at that. They threw dagger looks at me and I smiled back sweetly. After Mum and one of the Chavettes had got off, I was left sitting on the opposite side of the buses' back seat to the original protagonist. As she moved to get off at the Pom Pom, she ended up stumbling and almost falling over - her stilletto heel had not given me the painful injury she had intended as she had deliberately stood on my foot. I love my steel toecapped boots...

Only nearly forty years too late I have become a convert to the excellent and groundbreaking radio comedy series "Round the Horne". I am amazed I have not been aware of the show until a few months ago when I came across an archive recording being broadcast on BBC7. It is laugh out loud funny and features many talents, including the incomparable and sadly missed Kenneth Williams. You can hear more below:
Play Full Length Episode

Round The Horne - The Clissold Saga Part 1 - The Millionaire

You can hear regular episodes of the show on UK DAB radio, or over the interweb by visiting the BBC Radio 7 website.

Apparently Ken Livingstone is proposing to increase the daily London congestion charge to £25 for a car with an engine capacity of over three litres. Kenny Everett had a novel solution to this kind of problem, way back in the early eighties - check out the video clip below; it may well bring back some memories. Your thoughts and comments can be left by clicking on the comments link below if you wish.

On a lighter note, some new shops are finally getting close to opening in the new but largely empty Erith Riverside Shopping Centre. Dominos Pizza looks like it is only days away from opening its' doors to trade. Two other as yet unidentified shops are also being prepared. Finally the new centre seems to be taking off, thank goodness.