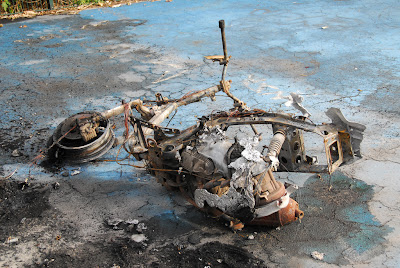 I took the photo above a couple of months ago with my Nikon D200 camera, along West Street in Erith, early one Sunday morning - click on it to enlarge. It would appear that some of the local low lives (of which there are burgeoning numbers) had stolen and burnt out some poor unfortunates' moped. I uploaded the picture onto my Flickr account and thought no more about it. Recently I was checking my Flickr statistics, to find that several people had been downloading this particular shot and marking it as a favourite. Amazing - it certainly was not intended to be any form of art - just a Chav knackered moped!

I don't know if you can recall back when I first started writing the Maggot Sandwich; the first handful of entries were submitted using an application called Flock - a free and open source web browser based on the code from Mozilla Firefox, with additional functionality added that enables direct access to Blogs, photo sharing sites and loads more Web 2.0 applications. When I last played with Flock it was not mature, and lots of features were either broken or unavailable; this has now changed and it is certainly worth you downloading it for free and trying out. It is not for everyone, but it is certainly worth investigating. Flock is available for free download for Windoze, Mac OSX and Linux.

I had a bit of a problem on Friday morning; I was just leaving the house when I experienced a primary failure of the residential ingress / egress control and security system (the front door lock broke!) This cost me the thick end of £180 for an emergency locksmith. Ho hum.

Below is a video taken at last years' FarnFest music festival; you may recall I took some photos that you can view here if you have not already done so. Ian was standing in for the band Oxide's singer who was unavailable - and rather a good job he made of it too. Sorry for the slightly duff sound on this clip - there were technical troubles with the audio feed to the camera I am led to understand.

Despite the use of professional camera, the operator definitely had a bad case of the shakes, if the footage above is anything to go by. It was however a very good gig. You can see my original blog posting here. Captain Colin of the Polstar Group website has already commented accordingly. Do check out his website - he has a 500 ton, 150 foot long North Sea trawler for sale!

This weeks' main video clip is from a band you probably have never heard of. Excuse the mullet haircuts and general fashion dodginess - this clip dates back to 1983. The band were somewhat of a cult in the early to mid eighties, though they are still together and gigging today - they were regulars at the old Marquee Club in Wardour Street. This track "The Ceiling Speaks" is the opening number from their second album - ladies and gentlemen, I present Twelfth Night...