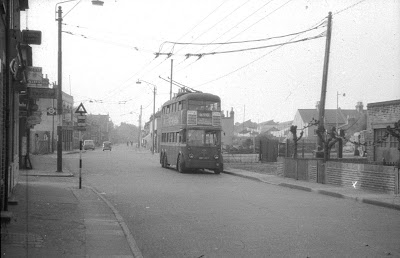 The photo above may appear familiar to some people; it was taken in West Street, Erith in 1950, showing one of the old trolley buses with overhead power cables. The Ship pub can be seen on the left hand side of the road, and to be honest it does not appear to have changed very much! Click on the photo to see a larger version. Talking of buses and Erith, I was travelling on the 99 bus to visit my Dad on Friday afternoon and had got as far as the stop in Upper Belvedere by the DVLA centre when a group of individuals boarded the bus; one of them told the driver she was thirteen and was exempt from paying a fare. There was only one impediment to this - she was a semi toothless, greasy and raddled harridan of around 40! An altercation with the bus driver was a welcome piece of street pantomime for the amused passengers. The crone eventually left the bus shouting abuse - I think from the state of her teeth and her general scraggy appearance that she was quite probably a Crystal Meth addict. Nice.

Television is pretty good right now; we have Primeval on ITV, Torchwood on BBC2, City of Vice on Channel 4, with new series of Doctor Who and Battlestar Galactica on the way. Oh - and to top this, the sequel to the excellent Life on Mars called Ashes to Ashes starts on BBC1 next month. We truly are in a new golden age of cult television.

This weeks' video clip is the teaser trailer for Ashes to Ashes - it shows the first meeting of DCI Gene Hunt and DI Alex Drake. See what you think.

Email ThisBlogThis!Share to TwitterShare to FacebookShare to Pinterest
Labels: Ashes to Ashes, Life on Mars