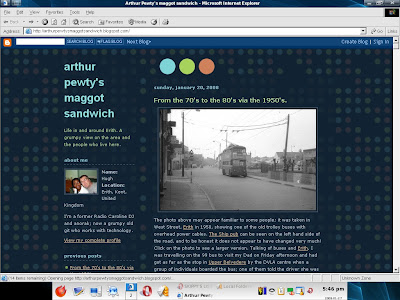 I have spent a quiet day on Sunday replacing the Fedora 6 Linux operating system on my trusty old Dell laptop with a spanking new installation of PC BSD Unix. It has been fairly painless all things considered - what you can see above (click on the picture to enlarge) is a screen capture of the old Maggot Sandwich displayed using M$ Internet Explorer (what, you say - IE is only available for Windows!) Er, yes, and I would not personally run IE as a browser of choice as it is a steaming pile of kak - Firefox, Opera, Safari, SeaMonkey and Camino are all far superior, if less well known. But as a proof of geekiness, I have managed to get it running on BSD Unix (Okay, I used the Wine Windows emulator, but it still was not easy). My entry for the Golden Anorak award for this month anyway. I have as always on a Sunday also been listening to the excellent broadcasts from local pirate radio station WNKR on 1476 KHz Medium Wave.

I was on the train to Dartford from Erith yesterday afternoon; I fancied a spot of shopping in Waitrose. The train had not long departed from Slade Green station and was just passing the large encampment occupied by our fine and morally upright citizens of the Travelling community, when I heard a loud bang. A minute or so later I got off the train at Dartford station to find that one of the windows in the carriage behind the one I was occupying had been shattered by some kind of projectile. I notified the station staff and thought little more of the matter and spent an enjoyable time shopping in Waitrose (the "No riff - raff store").

Upon returning to Erith later in the afternoon, I encountered two members of the British Transport Police who were running routine ticket checks on passengers. I mentioned the incident and they were extremely interested. They took my details and a statement and were keen to investigate the matter. Their concern was that the railway line is quite high up on an embankment as it runs past the Travellers' site, and any feckless scrote who was throwing stones at passing trains would have their work cut out to break a toughened and double glazed train window. Both coppers were of the opinion that a catapult or air rifle may have been employed. I'll let you know if anything comes of the incident.

You may recall that not long ago the News Shopper local paper offered me the chance to become an official Blogger. I politely declined the offer, as I don't really have the time, and I would not relish the additional media exposure it would entail. Another individual has taken the reins and is blogging under the pseudonym of Lord Erastus Theobold Piggott - he seems to take a broadly similar stance on local matters to myself, but unfortunately his tongue in cheek humour is not appreciated by many of his News Shopper audience. You can read his postings and reader comments here. I think I was right to turn down the offer of a more public podium for my musings - what do you think? Please do take a few moments and post a comment below.

This weeks' video clip is John Barrowman as Captain Jack singing at the cabaret; Anything Goes.