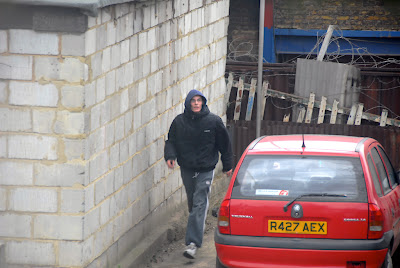 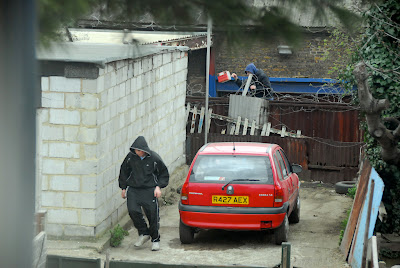 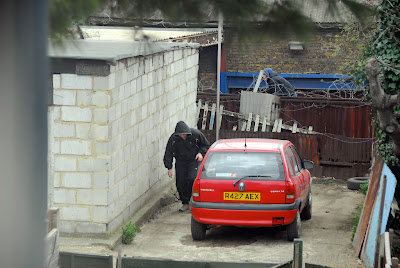 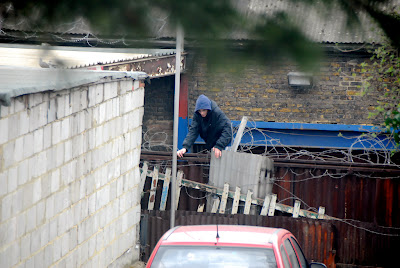 The photos above (click on any for a larger version) show a couple of scumbag Chav thieves actually whilst in the course of a burglary. They had climbed over the fence at the bottom of my garden - (the red Vauxhall Corsa belongs to a neighbour who I allow to park there). The scrotes had climbed over the fence and into the yard of a local non - ferrous metals recycling yard which backs onto my place, and then proceeded to steal old car batteries for their valuable lead content. They were throwing them onto my concreted parking area; you can clearly see a bright red battery in mid air in the second photo from the top - I happened to see the whole thing from my home office / radio room, which overlooks the back of my property. Although these were taken through a double glazed window, he combination of a high specification 18 - 200mm zoom lens and my Nikon D200 DSLR camera produced good results. Immediately after these were taken I rang 999 and the Metropolitan Police were at my door within about ten minutes. A stash of looted batteries are still on my property.

The two Police officers were amazed at the technical resources I had in my office - "better than we have got at the Nick" one commented. I enhanced the contrast and colour balance of the shots on my trusty Apple Mac and then displayed them to the officers on my wide screen monitor. The two oxygen thieving, festering Chav scumbags are known to the Police and further action will be taking place. Captain Tweed gets another small victory for decency and the rule of law over the unwashed criminal underclass.

In a separate incident on Friday afternoon, Shirley, her two children, my Mum and I were travelling back after a pleasant day out to Greenwich and the National Maritime Museum - people who have Friends and Family access rights to my Flickr photo library can see the private photos here.

We were on the 99 bus and three teenaged Chavs got on; nothing unusual with this maybe, but after looking them up and down I realised that these were members of a sub species probably unique to the Plumstead / Woolwich area. They looked so inbred (two were definitely brothers, and the third probably a cousin) - their coarse and contorted facial features reminded me of the Weevil aliens from Torchwood. The three of them began arguing in a series of grunts and screeches - two then used the emergency exit switch to open the rear bus doors whilst they were moving - they then jumped off; unfortunately they were not squashed flat by the following traffic. The third one went absolutely ballistic, throwing himself bodily at the clear plastic shield that protects the drivers' position - he did this three or four times, smashing himself with brute force at the hapless driver's cab and screaming incoherently. At this point he then used the front door emergency release and hung out of the bus whilst it was still travelling at around 30 mph. The driver slowed to prevent an accident. I noticed the lower deck of the bus was full of pensioners and women with small children, so I thought that I would do something about the yob. I made my way to the front of the bus, which had now come to a halt. The psycho Chav was still standing just inside the doorway screaming inarticulate threats at the driver and the other passengers. I swiftly approached, jabbing an extended forefinger down at his weedy chest. "YOU - GET OFF THE BUS NOW!" I bellowed in my best faux schoolmaster persona. His eyes widened (I was nearly twice his size) and he screamed back "I'll F***ing do you!" I, realising the events were being recorded on CCTV, resisted the almost overwhelming urge to beat the living shit out of him there and then, and responded with "Give it your best shot - make my day" (I know, I know, but I was stoked on adrenalin and blazing with red mist anger) as soon as he laid a finger on me I would be free to wreak a terrible and size 12 steel toecapped boot shaped vengeance on his sorry ass.

One of the few still functioning neurons in his frazzled brain must have made this connection, and realising he was batting on a losing wicket, he jumped from the bus, curiously then to take my photograph with his mobile telephone; Suffice to say that Churchill would have been proud of my V - sign in response.