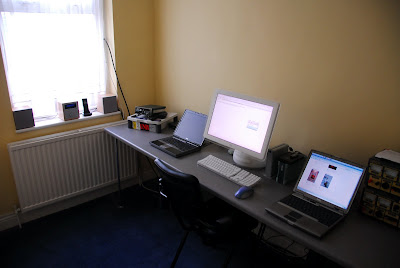 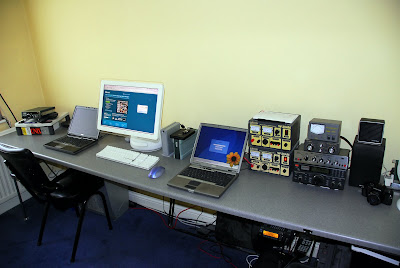 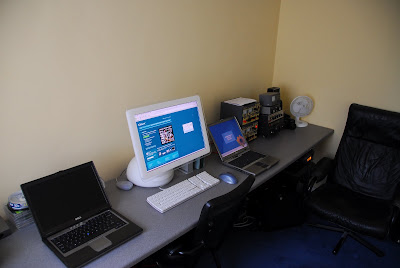 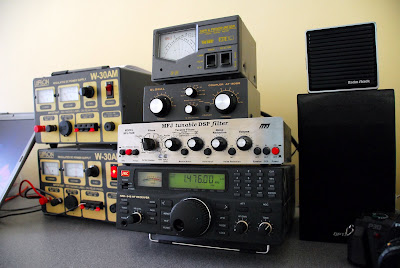 Thankfully I can report a quieter week after the travails recounted in my previous Blog entry. I have had several people ask me about my home office setup, so I publish a few photos above. It was converted by me from what was the spare bedroom next to the bathroom - the window overlooks the back garden and it is where I took last weeks' Chav Burglar photographs. My office is due a fairly major revamp in the near future, as my trusty but quite venerable G4 Apple iMac is due to be replaced by a whizzy new Mac like this one here. You may also note that I have some modest radio gear. I have been a licenced radio amateur for eleven years, though I am not as active as perhaps I should be. My international radio call-sign is M1CXN (Mike One Charley X-Ray November). So now you know.

This week's whinge - door to door sellers of stuff like Betterware; I have a sign next to the front door saying that I neither buy or sell at the door step. Nevertheless I get Avon and Betterware catalogues through my letter box with depressing regularity. I know that the hawkers of this unwanted tat have to pay their suppliers for the catalogues - so I make sure they make a bee line for the bin! I won't answer the door if I suspect the caller is: 1) A religious nut promoting their views. 2) Offering any form of product or service. 3) Not known to me. Even friends know to phone me before popping round. This might sound antisocial - and yes to an extent it is; but it is my property and I have the final decision as to who comes in. I do always check through the curtains just in case it is a neighbour who needs a hand, or something of a similar matter. I would love to have a drawbridge and portcullis so I could really keep the teeming hordes at bay.

I see that the den of vice and iniquity that was Infernos (note the lack of an apostrophe) has finally been closed down. The former Welling station hotel has been a seedy Chav infested nightclub and the Police have finally stepped in after many reports of hard drug dealing in the place. You can read all about it here.

Yesterday I took Ma out for lunch - Mother's day one day early. We went to the absolutely excellent Chapter Two in Blackheath. I had a starter of smoked haddock risotto (historic - one of the nicest things I have ever eaten) followed by medium rare, pan fried saddle of Scottish Venison served with leeks, potatoes and a port jus, followed by a selection of artisan cheeses and home made biscuits. Mum had a starter of Celeriac Veloute, followed by pan fried Sea Bream with cous cous and spring onion, and a green salad, followed by Lemon Posset. We also had a bottle of De Falco Di Tufo - a light and lemony white wine (not cheap, but well worth it). Check out Chapter two's website here.

I have finally had a response to my complaint about the behaviour of a 96 bus driver reported a couple of weeks ago. Here is what East London Buses said:

I am writing in response to the complaint you made about the driver of a bus at Plumstead Garage.

I was sorry to learn of the incident you described, such behaviour is not acceptable. Your comments have been investigated by the garage manager who has interviewed the driver under our disciplinary procedure. The driver agreed that he should not have acted in this way and has been dealt with accordingly.

If you could let us have the bill for cleaning your trousers, we would be pleased to arrange reimbursement.

Please accept my apologies for the driver's behaviour.

I am not going to submit a bill for trouser cleaning; they actually washed fine in the washing machine - I just wanted to make a point, which I feel I have now successfully done.

This weeks' media clip is not office friendly and does have some bad language - but it is very funny; you have been warned...