Pickled gherkin and a clean patio. 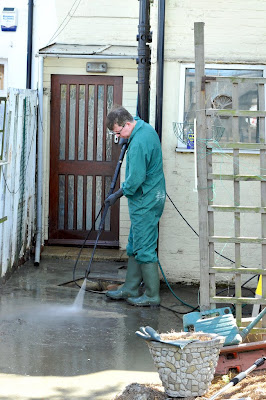 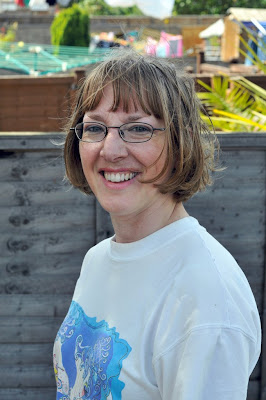 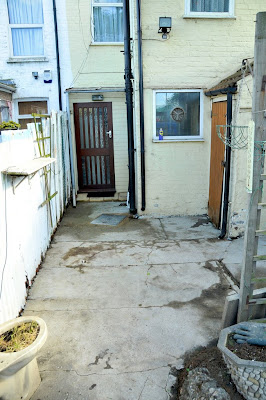 My sister Julia and her partner Chris came round this afternoon; Chris has a massively powerful jet wash unit that probably violates at least one weapons control treaty - he kindly cleaned my seriously manky patio. You may recall that some time ago I blogged about having my drains back up, and that I had to get them rodded. The action left the area around the back garden manhole looking very grotty indeed. Now everything is back to a more civilised look. The photos above show them both hard at work. Click on any one for a larger version.

I was standing at the 99 bus stop in Erith yesterday morning when a family of Chavs rolled up - mother and father about 20 years old and a brood of three whelps ranging in age from about six to maybe a year old sprog in a push chair. Bearing in mind this was about 11 in the morning, they were all already eating a greasy McDonalds meal. the parents were talking (okay, grunting and swearing as is the Chav norm) and as they did so, they opened up their cholesterol laden burgers and nonchalantly tossed the pickled gherkin slices from the patty, onto the floor without a beat. I was livid - the little slices are very slippery and plenty of elderly people use the area; it was the incredibly casual attitude to littering that really annoyed me. I bit my tongue as if I went into one it would have been in front of very small children. The Captain Tweed element in me wanted to knock their gel encrusted heads together - I don't think I will be so reticent if I ever see it happen again. The sad irony is that the gherkin would have probably been the only green vegetables the social inadequates would have ingested all week had they not chosen to decorate the path with them.

As you may know, I am pork intolerant and am unable to eat anything with pig in it without feeling very unwell indeed. This is a bit of a pain, and I have to read the ingredient list of many common products to determine if I can safely eat them. A new shop has come to my rescue; the old motor bike shop in Plumstead has now been relaunched as an African / Asian food supermarket. All of the food is Halal and they sell both beef and chicken Spam! It turns out that in Muslim countries many of the Western products usually containing pork are made, but using non pig based meats. This is a real winner for me, as I can take advantage of this for my dietary, rather than religious requirements.

I went to the corner shop to get a small carton of milk to make hard working Chris and Julia a cup of tea; on my way homewards a scrote in a passing Citroen Saxo threw a half full can of Lucozade directly at me! Fortunately it missed - and I have absolutely no idea why he chose me as its' target. I discovered recently that in Medieval times a favourite method of dispatching particularly odious criminals was to force them to drink molten lead. I sincerely feel that it is time for some of the more colourful customs of times gone past to be resurrected - one could also give them a modern twist; instead of throwing rotten fruit at crooks in the stocks, one could spice it up by throwing phosphorus grenades. Please feel free to leave comments and feedback below.

The video clip below is an over view of the Nikon D300 DSLR compared to the earlier D200 model; I have owned both and it is a fair review and well worth a look if you have any interest in cameras and photography.