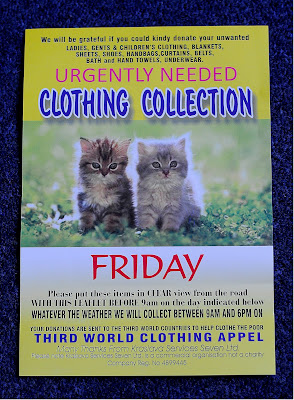 As I reported a while back, I get inundated with misleading leaflets posted through my front door from commercial organisations masquerading as charity clothing collectors - see above for another of these morally fraudulent flyers. I originally blogged about the whole issue here. What the fluffy kittens have to do with the whole matter totally eludes me.

UPDATE - the Stewdog (see leading comment below) has Emailed me with the following information regarding the company behind the fake charity collection leaflets - read more:

Kraslava Services Seven Ltd's leaflets are misleading and may be in breach of the Control of Misleading Advertisement Regulations 1988.

The Advertising Standards Authority ordered the company to cease circulation in July 2004 but the company ignored the ruling.

Our enquiries conclude that the company's registered address and the address of its' director and company secretary are false. This is a contravention of Section 136 (1) of the Companies Act 1989.
Kraslava Services Seven Ltd picking up a bag from Jon.

This, combined with the misleading nature of their leaflets constitutes an offence of Obtaining Property By Deception, under Section 15 of the theft act 1968.

Who's behind the company?
Two former workers of the company named their former boss who is a Lithuanian man, but we were unable to trace him."

As I have banged on about on a number of occasions in the past, I am resolutely anti mobile telephones. There is increasing evidence that they are statistically linked to the incidence of brain tumours in humans - and let's face it, they are obnoxious and interfering devices that should be assigned to the waste bin of history. You can read my original rant about the whole mobile telephone debacle here.