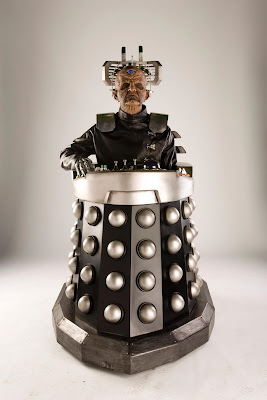 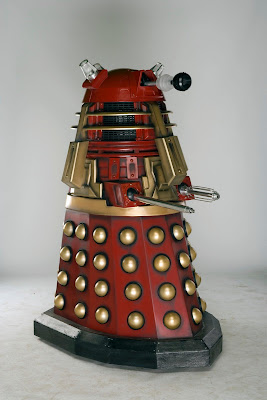 The photos above are a minor spoiler (most fans are already aware) before the start of next Saturday's three part Doctor Who season finale, which brings back both the Daleks and Davros. Click on either photo for a larger version.

After last week's minor disaster with the terrestrial digital receiver and the almost total lack of local signal, I see that WNKR have posted a comment on my last posting. I have to admit that I did not realise the parlous state of local digital TV signal provision. I have returned the antenna and got a refund; I will keep the receiver unit, as it may become more functional when I eventually move house. The governments' aim to migrate every person in the UK to a digital TV platform by 2012 seems somewhat over optimistic in my opinion. I suppose that I have been insulated from the whole local signal strength issue by being a satellite TV user for the last goodness knows how many years. Not that satellite is without its' own problems – my Sky Plus box regularly crashes or sits, sulking for long periods of time until I force it to reboot by switching the power off then on again; it then usually takes a couple of minutes to gather its' thoughts and get going again. I worry how much longer and more frequent these episodes may be when I eventually transition to high definition, bearing in mind the far higher data transmission rates involved. Any opinions? Leave a comment below and enlighten me.

There are times when even I have to bite my tongue and quietly seethe; last night I was set to meet Ian to get the bus to Crayford to photograph local rock band Oxide playing at the popular music venue The Bear and Ragged Staff (good for live music, pretty dire for anything resembling decent beer). I was standing at the bus stop, and sat adjacent to me was a girl of around 17 or 18 who was I estimate was around eight months pregnant – she was quite petite and had a huge bump; this aside she was clutching a can of Carlsberg Special Brew and had a cigarette in her mouth. I sincerely wish that I was exaggerating for journalistic effect, but I am not. I see this kind of thing on a fairly regular basis – like the occasion when I saw a young mother at Plumstead station handing out fags to her three brood mates, none of whom were more than ten or eleven years old. I don't think they either know or care about the consequences of such behaviour. There was an interesting article in the Times this week about such situations.

My Mum encountered similar learned behaviour from a small Chav boy of no more than twelve when she was on the bus during the week; he sauntered on (free travel courtesy of militant Stalinist former London Mayor Ken Livingstone) and immediately proceeded to put his muddy feet onto the seat in front of him. Mum politely asked him to take them off the seat, only to be met with “Who do you think you are? You are not my mother!” It was only when another passenger intervened to back Mum up that the toe rag grudgingly relented, only to make obscene gestures to her when he got off. If I had been present, I suspect the situation might have been somewhat different – being six foot four, with size 12 steel toe capped jungle boots and a sturdy tweed jacket certainly have a beneficial effect! Kids nowadays have no respect or fear of authority.

Once again this Blog entry is brought to you from a virtual outside broadcast, and absolutely no prizes for guessing where. There is something quite conducive to writing to be sat in a civilised hostelry and in a position to watch the world go by at its own pace. Oh – and the guy sitting at the end of the bar is once again filling in the Le Monde crossword. I wonder if he gets paid to add local colour? Maybe he is the Bexleyheath equivalent of Mickey Mouse at Disney world? Somehow I doubt it. I am currently supping a cool pint of Golden Ale from Archers of Swindon; surprisingly light and aromatic, certainly a pleasant summer drink. I am awaiting the delivery of a Stilton Ploughman's lunch, which from past experience will more than hit the spot.

I have now purchased Aperture 2 for my new Apple iMac; it is a digital photo manipulation application and I need to spend some time watching the on-line tutorials, and reading the manual in order to make the best of the somewhat pricey software. I am hoping it should help me improve my photography, or at least rescue otherwise unusable shots. I wish Apple would open source some of their stuff!

Email ThisBlogThis!Share to TwitterShare to FacebookShare to Pinterest
Labels: Chavs, Doctor Who