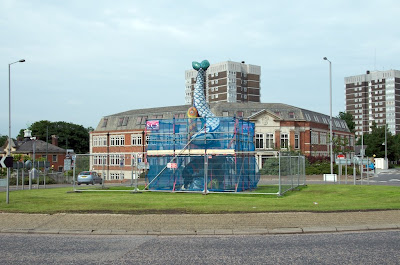 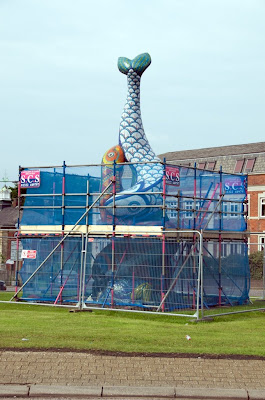 I first Blogged about the hideous Erith Fish Sculpture way back in October 2006. Since then it has been the location of a failed suicide bid, when a bloke deliberately drove his car at it. The guy got off with minor injuries (if you wish to kill yourself in a modern car, it is a good idea to disable the air bag first); He was patched up in hospital, only to jump off the top of a local tower block a week later. There's no pleasing some people. Anyway, after the local council shelled out £60,000 of council tax payers' hard earned cash to commission the garish monstrosity pictured above, only eighteen months later they have had to call the artist back again as the thing is already falling apart. The mosaic tiles appear to have been laid on top of Polyfilla! As you can see from the photos above, the thing is undergoing fairly major restorative surgery. A couple of pounds of Semtex under what has become the wart on the hairy bum that is Erith would surely be preferable.

Please feel free to leave a comment using the link at the bottom of this posting. You don't have to identify yourself if you don't want to.

I think a vast majority of the residents of South East London and North Kent have completely forgotten all forms of manners and decency; nobody (apart from myself and a small number of civilised people) bothers to queue at bus stops - there is generally a rabble and each person for themselves. It is not just children, many of the parents are just as bad. I always have a go at anyone who pushes in front of me - what amazes me is most of them don't even realise they are doing anything wrong! The same thing can be said of holding a door open for someone; most times you are deemed lucky if you get so much as an incoherent grunt of thanks, most of the time there is no response at all.

My photos of both the Erith River Festival and last Saturday's FarnFest have gone down well, with many people viewing them. If you wish to have a look you can find them here.

I am hoping to attend this years Chap Olympics, held in London during July; you can read an account of the goings on at last years' event here.

I have been experimenting with a terrestrial digital TV receiver for my new iMac. The small plug in receiver is almost the same size as a USB memory stick; once the supplied software is installed all looks OK until I try and get a signal. The first desktop digital antenna I purchased did not work at all - in fact it looked like it had been returned as faulty then put back on the shelf at Argos. I got a replacement and all I can pick up is Sky Sports News and Sky Three, and both of these pixillate, pop and fart - it is easier to watch BBC iPlayer. I think I must live in a terrestrial digital signal black hole! Any suggestions are welcomed.

Do watch the clip below - it is only three minutes long and is quite entertaining if you are a Dr. Who fan like me.