Oxleas of the Holy? 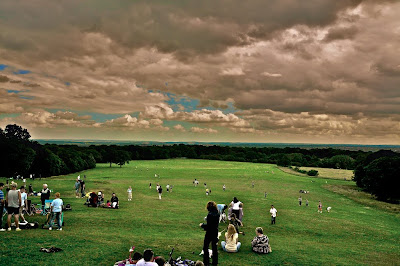 Plantar Fascitis – That is what I have been suffering from for the last week and a bit. It is a form of Tendonitis affecting the tendons that run along the underside of the foot. I went to see my GP and she pretty much rubber stamped my self diagnosis. The wonders of the Internet! I am on the mend now, though my left foot is still pretty swollen, though it does not hurt nearly as much as it did. Apparently it is brought on by RSI (repetitive strain injury) - probably from my habit of haring up and down underground escalators; I do tend to use the tube a fair bit, especially when travelling to and from Watford. Yes, I do detest the Northern line with a vengeance.

I recently stumbled upon the Flickr photo site of a local chap called Steve, who is very interested in local history; he's documenting and photographing all aspects of the London Borough of Bexley; I have left comments on quite a number of his photos, which you can view here. It does seem that in this on-line world, photographs are far less valued and preserved than they were. It takes insight and forethought to preserve what is happening now for the future. I hope more people do the same before now is lost. Modern digital media is far too ephemeral and easily lost.

Erith seems to be the home of the tattoo; I feel somewhat isolated in being apparently the sole Erith resident who is un-inked. Personally I cannot abide this form of personal mutilation; I think tattoos are ugly and unnecessary, and speak negative volumes for those who sport them. It would appear that I am in the local minority in this respect. I just cannot understand the motivation of people who wish to damage and despoil their bodies – and the same stands true of those devotees of piercing – each to their own, but the mindset completely escapes me.

On a somewhat predictable level, I am sat in my favourite seat, in my favourite place, supping a cool pint of Everard's Tiger – an aromatic and smooth real ale. The usual suspects are propping up the bar, discussing the forthcoming Grand Prix, though I have yet to see the Le Monde crossword guy. I am, armed with a set of ear buds, listening to Julian and Sandy holding forth from my Ubuntu Linux laptop – ripped into Ogg Vorbis audio format, from a CD I was given for my recent birthday. My trusty Dell D600 is getting somewhat long in the tooth now; I am getting tempted by the new sub notebook sized Linux based computers that are now coming onto the market. I think an investment is possibly on the cards – it would be ideal, with such a small form factor and long battery life - especially when I am blogging away from home, as today.

By the way, in case you were wondering what the somewhat surreal photo at the top of this posting is, it was taken by me at last weeks' music event in Oxleas Wood, as documented by me in my last blog entry. The photo has been extensively modified by me using Aperture 2 - more of a case of "I wonder what this control does?" Than any systematic approach - I think that the end result is suggestive of the album over of "Houses of the Holy". More by luck than judgement I concede. Click on the photo for a larger version.

WNKR are broadcasting a medium wave signal on 1476 KHz that is now being received over a large part of Western Europe every weekend, as well as their world wide online audio stream.

Here is a real gem of late 80's hair metal. I reckon that there was an individual hole in the ozone layer above each member of the band due to the industrial quantity of hair spray involved - let's hear it for Vixen. What were they thinking?