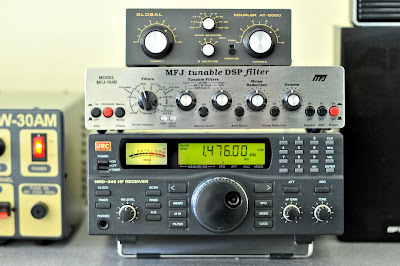 The photo above (click for a larger version) shows my JRC NRD 345 communications receiver, which although getting a little long in the tooth at just over ten years old, still produces superb results on both Medium wave and Short wave (H.F). Here you can see it in action, earlier today tuned into this weeks' broadcasts from WNKR.

It is quite a time for anniversaries; WNKR are celebrating their 21st birthday this weekend - they had their inaugural broadcast on F.M from a tower block on the highly dodgy Larner Road estate in Erith, way back during the August bank holiday in 1987. They have been going ever since, though they have now moved onto (temporarily) 1395, and now to their regular weekend home of 1476 kHz Medium wave.

The other anniversary was overlooked by me at the time, so I intend to remedy that now; the Maggot Sandwich was two years old in the middle of July, and I completely forgot! You can see my first ever posting here. As you can see, things have changed somewhat in the last two years.I really had no inkling as to how the Blog would take off when I set it up in mid summer 2006, and get the level of readership that it now enjoys. I just wish a few more people would provide feedback (use the comments link below - you can post anonymously if you so wish). This surprisingly enough is my 178th Blog posting!

You can see all of my photos, including my most recent uploads, by visiting my Flickr site here.

Wife Beater Airlines (the Stella Zeppelin) have now finished for the year; on some days the airship was overflying my house up to seven times a day. I think it stopped before it outstayed its' welcome. I have been carrying out an unscientific and informal investigation - I have been counting the number of discarded beer cans I see in the street and in hedge rows. So far the results seem pretty conclusive; for every ten discarded cans I see, one is Heineken, one is Fosters and EIGHT are Stella Artois! It would seem the street drinkers' tipple of choice is indeed Stella. Please read the article here - unfortunately sourced from the daily paper I most despise, but the article is well written and puts some valuable points into consideration. Stella Artois has indeed "done a Burberry" and ruined its' own reputation.

The video clip this week is doing what the BBC do so much of in the summer - it is a repeat of something I featured around a year ago; I don't think that many people actually watched it before, so I am giving you a second chance. The mini film is set in Canada, and the dialogue is in French with subtitles, but please do not let this put you off. It is hysterical - if the writer and director Kevin Smith was to make an art house movie about a group of Dungeons and Dragons players, this is what he would have come up with. Do feed back via the comments link below this post.
Posted by Hugh at 7:32 pm