Down on the Erith Delta. 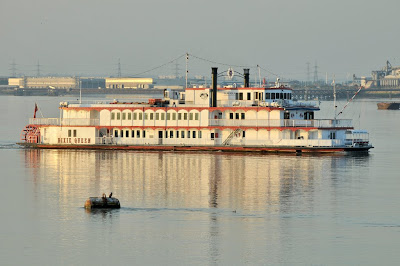 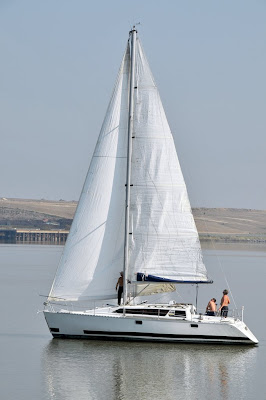 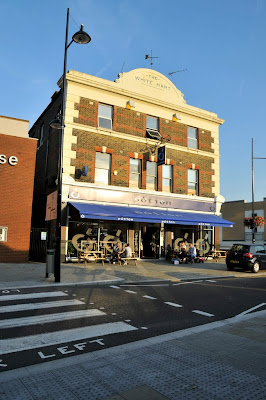 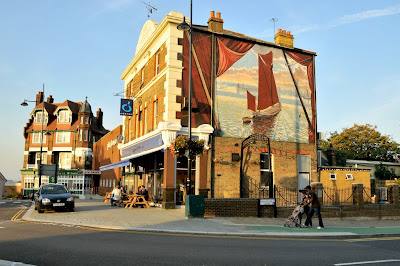 Here are some photos taken this weekend in and around Erith - click on any photo for a larger version. The top shot is the Dixie Queen - a reproduction Mississippi paddle steamer that is available for hire for weddings and corporate events; it is normally moored in London, and I have no idea what prompted its' excursion deep into the Erith Delta. The yacht photo shows some members of Erith Yacht club on their vessel; the trouble was, the photo was taken at slack tide, and there was no breeze - they were effectively becalmed. The bottom two photos are of the already notorious Potion bar. I was speaking to an official from Bexley Council yesterday, who told me the original fascia, windows and internal glasswork in the former White Hart had rendered the structure a grade 2 listed status. Apparently even the old pub sign had to be preserved; When a planning officer told the new owners, ten minutes after he had left the site, they cut down the old sign with an angle grinder and put it into a skip. You can see the exterior design for the old White Hart here. The new owners have butchered the building with no thought to local history and heritage. Needless to say, the new Potion bar serves around eight super chilled and gassy lagers, and not a sight of any real ale. I will be keeping tabs on the place, as it is bound to become a dive and Chav magnet.

I have been thinking, without a conscious effort, I am actually a pretty green and environmentally friendly person; I travel exclusively by public transport (apart from the odd lift in the Maserati, I concede). I never, ever fly or travel long distances, and in the normal scheme of things, I do try and grow a small proportion of my own vegetables.

Some good news this week; Colin Turner, G3VTT is about to take his position as President of the First Class CW Operators Club - the premiere group of Morse code operators in the World. It is an extremely exclusive organisation, limited to 500 members world wide - to even be considered for membership, you need to have a Morse speed of a minimum of 30 words per minute. He is the person who taught me about radio and electronics, and got me through the Radio Amateurs' Examination. A thoroughly nice chap and a Morse code gunslinger!

I was on the Northern Line tube, travelling from Euston to London Bridge last Wednesday afternoon. After going a couple of stops, I started feeling extremely unwell; I needed to go to the loo immediately. I developed terrible sweating and it took all of my strength and concentration not to mess myself. I realised that I had to get off the tube train and find a gents with alactrity. After struggling up the escalator at Angel station - incidentally, (and to my detriment, the longest passenger escalator in Europe). Once I go to the ticket office at the top, I asked a station worker where the nearest public toilet was - to be told that there were none locally, and that I would have to use the toilets in the Burger King opposite. I staggered in to the fast food outlet, and to his credit, the manager immediately showed me to the gents toilet. Suffice to say there was an immediate and almost thermonuclear explosion of steaming Marmite Lava. Utter bliss. I was shaken and sweaty, but was able to wash and make myself presentable before resuming my journey home. I managed to endure the overland train journey back to Erith, but I was finding myself increasingly uncomfortable - I needed to drop my guts again pronto, but the train toilets were all locked. I managed to exit the train at Erith, knowing that there is a toilet for passengers use - you have to ask for the key at the ticket office. Which was shut. Plan two - there are new public toilets in Erith Health centre, with external access for the public. I got there with my bowels about to go critical, only to find the toilets shut and locked. Things were now getting extremely serious; although I was only five minutes walk from home, I knew I would never make it. I managed to shuffle into the KFC drive through at the end of my road and was finally able to get into their loo and expel something noxious to alert the Coastguard. Once home I was able to take something for the condition and have an early night. It would seem I had been the victim of a gastric bug which is currently doing the rounds. What strikes me is how few public toilets there are left in the UK; I was extremely close to losing control, and it was fortuitous that there were a couple of conveniently placed fast food outlets - my only port of call in the intestinal storm. I am normally pretty dismissive of these places, but I would really have been up a creek without a paddle without their facilities. In tribute, here is a video from some American chaps who seem to have a rather good recipe for home made beef burgers; personally I would lay off the added salt, but each to their own...
Posted by Hugh at 7:03 pm