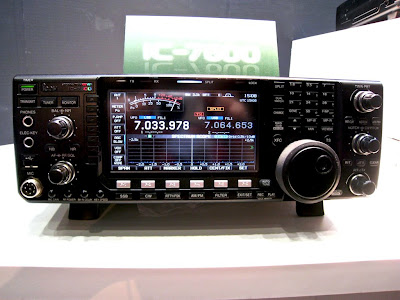 I have not really mentioned that much about my involvement with Amateur Radio recently. It is a technical hobby I have been interested in for many years, and I have held an Advanced Class Licence since 1997. I don't go on air nearly as much as I really should do, and at present I am only active on the 2 Metre VHF band. I would love to be in contact world wide on H.F (shortwave) as my licence permits. The radio above is the brand new Icom IC 7600 H.F transceiver, which is just being released in the U.K. Click on the photo for a larger version; A rig that I am quite interested in, though once it is available it will probably retail at something in the region of £2000. Ouch.
Popular Leeds based beat combo, the Kaiser Chiefs have filmed the video for their latest single just up the road in and around Thamesmead town centre, including filming in the Barge Pole pub (somewhere that I personally would not touch with the aforementioned pole) - I guess they wanted a post modern wasteland look and feel, which they certainly got - Thamesmead is an utter cesspit that makes Erith look classy. Unfortunately YouTube does not permit the embedding of the particular video in Blogs and suchlike, so you will have to visit the web page to view it here.
Ian and I went out for a little sojourn down into rural Kent last night with Allen in his awesome Maserati 4200 Cambio Corsa. Nearly 24 hours later I still think some of my internal organs need re-arranging! We pootled (if that is the word for a thoroughbred 400BHP V8 engined Italian supercar) along to the Angel pub in Addington. They have a website you can view here. Ian and I supped Spitfire bitter from local brewery Shepherd Neame, whilst Alan stuck to the non alcoholic stuff. A memorable night out. Allan also got to see my new Apple Mac and I think he was rather impressed. Might he be a convert? Who knows?

I have spent the latter part of this week in a somewhat dis-chuffed mood; my next door neighbour took it upon herself to block our shared drain with wet wipes and various other non - flushable nasties. For the second time in six months I had to call my insurance company and their drainage engineers. My section of drain was clean and block free, but the manhole housing the shared drain outfall in next door's garden was blocked solid. We had to climb over the fence in to the neighbour's garden, as she was out at the time; suffice to say the engineer had to shovel it clear, then drain rod and power wash the area. Absolutely disgusting; I will now need to get my concrete patio jet washed once again - something that was only recently done by Chris. I am pretty certain she is avoiding me, as she has no doubt heard the bad news from other sources. I will be having words...

Veteran Radio Caroline listener Jim Salmon has just been back in contact after many years; you can view his excellent website here.

Sad news this week. Richard Wright, keyboard player and songwriter with Pink Floyd has died at the age of 65 from cancer. Here is a video clip with him playing live At the Royal Albert Hall in 2006 with David Gilmour.