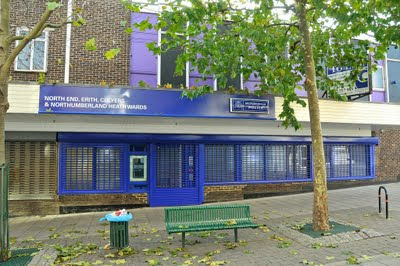 The photo above shows the Police office in Erith Town Centre; I took the picture in October last year, hence the falling leaves in the foreground. Now for a bit of a mini local scoop. Some very last minute news has come to my attention whilst typing this weeks' Maggot Sandwich entry. North End Safer Neighbourhood team are moving into the office with effect from Monday 18th July. Finally.  The office was built a couple of years ago, but just before its' originally scheduled opening date, it was decided by the powers that be that instead of just housing just the Erith Safer Neighbourhood team, it would be expanded and modified to house the North End, Colyers, Northumberland Heath and Erith teams combined. For various planning and budgetary reasons it has taken well over a year to get the move approved and in action. No doubt once they have got moved in and got their feet under the table, I will pop round for a cup of tea and a chat. More on this story soon. 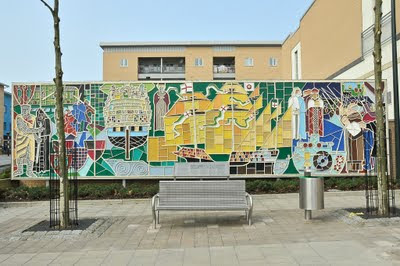 The refurbished Erith mural, now located adjacent to the Blockbuster store in Colebrook Street, in Erith Riverside Shopping Centre. The mural was originally attached to the old Erith Swimming Baths, but was preserved and relocated when the Baths were demolished. It is a pity the mural seems to be ignored by a majority of locals; no-one seems to pay it any attention, which does have the unexpected side - effect of meaning it has not been vandalised to date.
Following the blog related contretemps last week, and the encouragingly large number of people who have posted supportive and knowledgable comments regarding the unpleasantness with Rico; I can say that I have heard precisely nothing from the man himself. I think it is fair to say a line can be drawn under the issue, and I can move on in a more productive and inclusive manner. Consequently this weeks' update is a bit less text heavy, and features a rather greater proportion of interactive content. Less to read and more to watch, in other words. 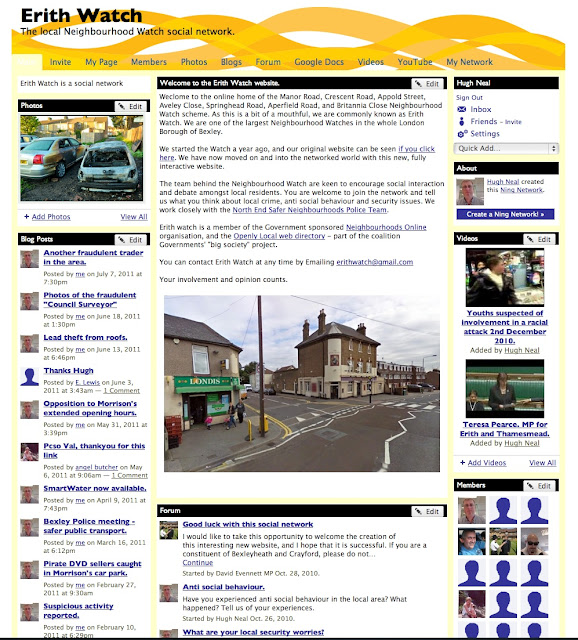 The Erith Watch Neighbourhood Watch scheme and the associated website have just been voted Bexley Borough Neighbourhood Watch scheme of the month. Bearing in mind that there are a little over 300 Neighbourhood Watches in the Borough, it is quite an honour.
You may or may not recall that quite a while back I featured the Church of the Flying Spaghetti Monster, and its' adherents, known as Pastafarians. Well, this week they made the mainstream news. This is an extract from the BBC News website story:-
An Austrian atheist has won the right to be shown on his driving-licence photo wearing a pasta strainer as "religious headgear". Niko Alm first applied for the licence three years ago after reading that headgear was allowed in official pictures only for confessional reasons. Mr Alm said the sieve was a requirement of his religion, Pastafarianism. Later a police spokesman explained that the licence was issued because Mr Alm's face was fully visible in the photo, and was not approved on religious grounds. A self-confessed atheist, Mr Alm says he belongs to the Church of the Flying Spaghetti Monster, a light-hearted, US-based faith whose members call themselves Pastafarians. Mr Alm says the next step is to apply to the Austrian authorities for Pastafarianism to become an officially recognised faith.
The Pound Town store in the old Wise Furnishings building has still not opened; it feels like weeks since the new tenants took ownership of the building, but they are still in the process of stocking the place. At the rate they are going, I reckon a good proportion of their goods will be past their best by dates before the doors finally open. Notices in the windows promise the doors will open "at the end of the month". We shall wait with baited breath. Or something.

I am a great fan of retro computing, and of those individuals who continue to find innovative uses for classic 1980's era home 8-bit micro computers. I still own two 48K Atari 800 computers, complete with 5.25" floppy drives, a host of other peripherals and several large boxes of software. If time and resources permitted, I would love to get them working online. It can be done, using the modern Contiki operating system. Contiki is a low level computer operating system primarily intended for use in embedded devices; it can also be ported to classic 1980's home computers such as the Commodore 64, Sinclair Spectrum and Atari 800. It provides a pre-emptive multi tasking environment with a basic graphic user interface, Ethernet support, a TCP-IP stack, an Email client and text based web browsing. All in around 29K of 8-bit RAM. Amazing. The application below does not use Contiki, but a chunk of very clever proprietary coding. Behold - a 48K Sinclair Spectrum running a real time Twitter client. All very cunning stuff.

One thing that does seem to have come out of the whole News of the World phone hacking scandal is that the Police may have had some involvement with mobile phone "pinging". This is a method by which a mobile phone can be located by radio triangulation between mobile phone base stations, or in the case of smart phones with a GPS receiver, by the base station interrogating the handset for its' precise latitude, longitude and altitude. This will locate the device, and thus the owner to within approximately three metres in any axis, depending on local conditions. The powers for the Police to request such a trace are supposed to be vested in a few experienced and senior officers. In the event of a person going missing, it can be an invaluable and potentially life saving tool. The potential for mis - use is also wide. It may be that persons unknown were submitting requests for locational tracing of members of the public without authorisation. Many people do not realise that if they carry a mobile telephone, that in addition to the potential health risks from microwave radiation that they may experience, it is also a means of tracing them with an unparalleled degree of accuracy over large swathes of the planet. So now you know. 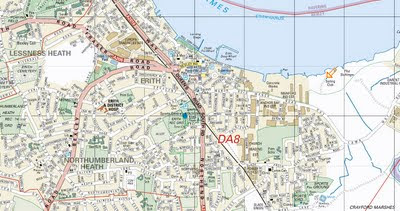 The community based group the Plumstead Integration Project are holding a mini film festival at Erith Yacht Club - details include a very rare screening of the 1962 cult Roman Polanski film "Knife in the Water". The event takes place at Erith Yacht club on Saturday 6th August, and is free. A map above shows the location of the clubhouse - click on it for a larger view. The schedule is as follows:
6pm: Gathering


7pm: Screening of Boat Dreams by Sasha Andrews - an award winning documentary film
7.30-8pm: Break for drinks, socialising, and and a walk on the club balcony.
8pm-9.30: Screening of Knife in the Water - a motion picture by Roman Polanski.


Although the event is free, prospective visitors will need to  confirm their interest via email to rabikom2000@yahoo.co.uk or by texting the organiser Marta Rabikowska your name, and the number of seats you wish to reserve to her mobile phone number - 07759 612066
The two video clips below come from a recent YouTube sensation - the animated adventures of Simon's Cat. They have become so popular online that that have now spawned a spin off book, T- shirt and all manner of other commodities. The premise is simple. An ever hungry and rather stupid domestic cat runs rings around his long suffering owner, the eponymous Simon. Watch the videos below and please leave a comment at the bottom.


The 29th annual War & Peace Show takes place on the 20th to the 24th July at the Paddock Wood Hop Farm near Tonbridge in Kent. You can read more about the event by clicking here. Captain Colin will once again be heavily involved in the organisation of the event. I hope that the weather is good for them this year.
After passing the place on a number of weekday lunchtimes recently, it would appear that the Mambocino coffee shop and cafe in Erith town centre is in rude health, and apparently doing rather good business. It is certainly always busy when I pass - to be honest, I would like to give the place a try to see what their cooking is actually like. It concerns me that nearly five years after its' initial opening, there are still a substantial number of empty shop units in the centre. The large corner unit opposite Argos looks like it is being prepared for a business, but when I asked the workmen inside, they did not have a clue.
The main video clip this week is the initial trailer for the forthcoming Guy Ritchie movie "Sherlock Holmes - A Game of Shadows". I am a big fan of the literary Sherlock Holmes, and of both the Jeremy Brett interpretation, and the modern BBC TV series "Sherlock". I did not expect to think much of the first Sherlock Holmes movie, but actually I absolutely loved it - it was far better than I had ever expected; portraying the fictional detective as a kind of Victorian super hero, whose power was his unparalleled intellect and ability to observe and deduce. I hope that the sequel lives up to this. Watch the trailer below and decide for yourself.
Posted by Hugh at 6:30 pm