Now you see it, now you don't. 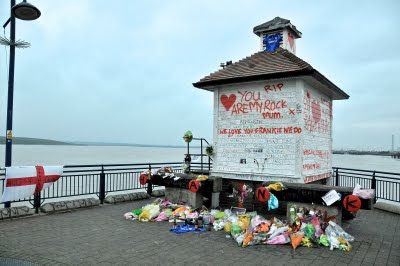 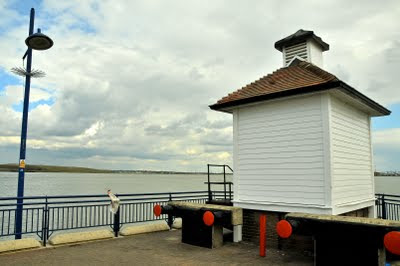 The wooden clapper board hut at the end of Erith Pier has finally been repainted and refurbished after the bout of vandalism to it, back in March, which occurred after the family of a man who committed suicide by jumping into the river from the pier decided that they would set up a "shrine" to him. They daubed graffiti in bright red paint, and black marker pen all over the structure, and generally defaced it in a horrible and extremely destructive way. That was then. The powers that be arranged for the redecoration and graffiti removal at the beginning of this week - now well on the way to September. I can understand a degree of circumspection - after all, a violent death was involved, but this gave no excuse for vandalism and criminal damage to be allowed to take place with no retribution taken to those well known to be responsible. They should have been prosecuted and made to pay for the restoration work. The current post-religious fad amongst the benefit spongeing, shell suit wearing members of the criminal underclass for creating shrines to the dead in the place where they met their end is a fascinating one. I am sure that an anthropologist could write quite a hefty thesis on the background and development of the relatively recent phenomenon. There is a short article on the practice here. The pier is now looking cleaner and more civilised since the restoration work, and after talking to several people who frequent it on a regular basis, the remedial work has been greatly appreciated. 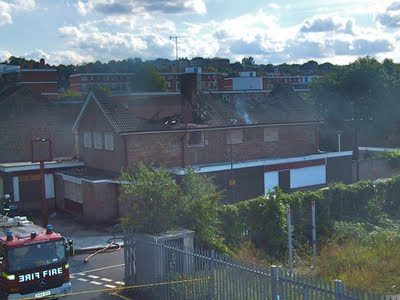 The closed and long time unloved and dilapidated pub by Belvedere Railway Station, the Belvoir Tavern mysteriously burned down on Wednesday afternoon. The pub was built in the 1950's and was a dive from the moment it first opened its' doors. It then went rapidly down hill, and has been a hang out for drug dealers and all manner of local low lives until it was finally forced to close. The building had been empty for quite some time after it lost its' licence as pub, then reopening as a Nigerian restaurant and private events venue. Because of repeated violations to its licence conditions, and a number of mass gang fights with participants from as far away as Deptford, and general increased criminality in the area as a direct result of its' operation; it once again lost its' licence. Local scuttlebut is predictable but probably accurate; it was either kids vandalising the place, or it was an insurance job. The latter is certainly a likely cause. The place is unusable in its' current form, and would be very unlikely to ever get another drinks or entertainment licence, having lost it twice in a handful of years. It would be difficult to economically convert into flats. Occam's Razor would suggest that fore planned arson is indeed the most probable cause. When more details become available, it may well be possible to revisit this assumption. The photo above was taken by Belvedere resident Danny, who has given permission for me to reproduce it here. You can see Danny's Flickr album here.
MP for Erith & Thamesmead Teresa Pearce has been active campaigning for improved disabled access for Erith Station. You can read all about it on the News Shopper website here. I am glad to see the issue being raised at a high level, South East trains have a dreadful record when it comes to DRA (Disability Rights Act) issues. I upbraided them a couple of years ago about the lack of wheelchair / buggy access at both Plumstead and Chatham railway stations. I even raised the matter directly with then Minister for Disability Jonathan Shaw (who I met on a number of occasions as part of one of my professional roles at work). He was a genuinely thoughtful and nice guy, though he could have done with a bottle of Head and Shoulders - he had dreadful dandruff! in summary, South East Trains are legally obliged to provide adequate access for disabled people and parents with child buggies, but do not do so, as the costs involved are judged by them to be prohibitive. The cack handed way in which they attempted to deal with the repairs to Erith Station that were highlighted by me at the beginning of the year seem to indicate that any form of civil engineering or construction is completely beyond their meagre ability to manage.
The modern remake of the movie Conan the Barbarian is currently being shown in UK Cinemas, though I gather it is mostly showing to empty seats, as was the case when it opened in the USA where it tanked. All the reviews say that it is basically pants, and takes itself far too seriously, unlike the Arnie based original movie, which was a tongue in cheek festival of camp. Anyway, some minor genius has edited together the following clip, with a unique, Broadway inspired vocal sound track - I bring you "Conan the Barbarian: The Musical" - this is utterly brilliant - I cried with laughter.

As a licenced radio amateur, and someone who works professionally with technology, I was pleased to be able ot bring these two threads together at work this week. The swish new office building where I am primarily based has had an ongoing problem with Radio Frequency (RF) interference in very specific areas. I have been investigating the problem for some time, but never properly managed to get to the bottom of it. This week we hired Ofcom to come in and do a formal RF survey of the affected areas and to provide us with a report as to the causes of the interference, and their recommendations as to how to fix it. The two engineers arrived, one clasping the bit of kit pictured below. An Agilent Field Fox RF Analyser. A lovely bit of pro grade kit that I would dearly love to own myself - and it would have certainly made diagnosing transmitter and antenna problems back during my time with Radio Caroline - the only thing being, digital devices of this level of technical complexity simply did not exist back in the day. One problem - the Field Fox analysers are around £10,000 each. Click on the photo below for a larger version. 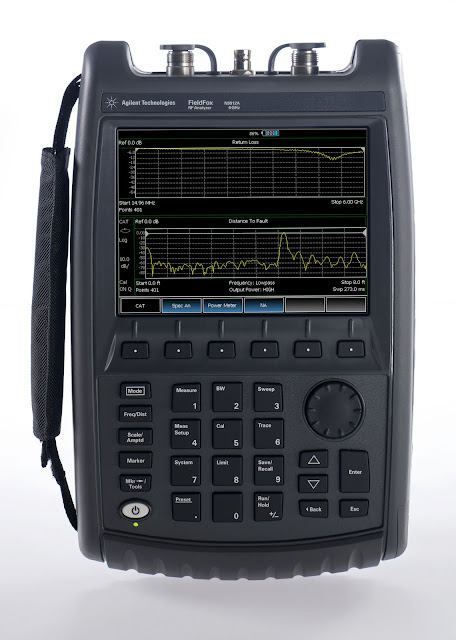 I was utterly incensed this Thursday when I entered Morrison's in Erith to make a few small purchases, as I do on pretty much a daily basis. As the store is so close to Pewty Acres, and I have to navigate past it on my way home from the station, it makes sense for me to make a small daily shop, rather than do a much larger weekly one. One thing that has always aided me getting into and out of the store in pretty sharpish fashion is the couple of "Hand Baskets Only" tills, with (usually) friendly and efficient check out people staffing them. This changed on Thursday. To my horror, as I entered the supermarket, I could see that the two tills I used on a daily basis had been replaced by "Self Service Checkouts" - which I have written at length about in the past. These abominations are unreliable, inaccurate and unbelievably clumsy in action. Their sole purpose is to reduce the supermarket giants' wages bill, as the six check out points are staffed by only two supervisors. This is insulting, cynical and unpopular with both the customers and the staff, from the straw poll of people I have asked. I utterly refuse to use the automated tills - why have a dog and bark yourself? Part of the money I pay for good in Morrison's is for a level of customer service. Prices are no cheaper if you use the automated tills - so in effect you are paying more to have to do it yourself. In addition to these auto checkouts, which hardly ever are properly functioning, if you do take a hand basket to a normally staffed checkout, you are usually stuck behind a family with a large trolley brimming with purchases. Yesterday it took me 30 minutes to buy two tins of soup and a packet of smoked turkey rashers (these are a fantastic substitute for bacon - I am pork intolerant and cannot eat anything even vaguely pig related). 25 of those minutes were spent queueing. No customer consultation or information has been made available. I will be writing to Morrison's HQ to vent my spleen accordingly. It would be interesting to hear other shoppers' experiences in this respect.

The video below is a new version of the theme to The Muppet Show, one of my favourite TV programmes as a child. A new movie is currently in production. It will be interesting to see how it pans out - suffice to say that things are looking promising. Please leave comments below, as always.

We have another technology anniversary this week; it is the 20th anniversary of the Linux operating system. From embedded systems like toasters, cash machines and satellite TV receivers to supercomputers and services such as Google, Twitter, Amazon, Facebook and Ebay, plus 75% of the world's super computers and pretty much all of the world's IT infrastructure, Linux is in place and enabling the world to function as it does. Linus Torvalds is one of my all time heroes and a definite role model.
As you may have heard in the news. Technology giant Hewlett Packard are exiting the hardware market.  In a move that was unexpected by the technology press, HP are leaving the production of PC's and associated hardware in order to concentrate on software, which they think will have bigger profit margins. In so doing, they very publicly dumped the just launched HP Touchpad range of tablet devices. The 32Gb version was dropped in price from £420 to £115 in UK stores in order to quickly dispose of the stocks. I tried to buy one from the Curry's store in Canary Wharf, only to be told that they had already sold out, due to the huge demand from customers. I think HP could take a lesson from this - continue making hardware, but don't try and compete with Apple, as you will only lose. Instead create products that are cheaper and better value. WebOS is not a bad operating system - but make it compatible with Android, and everyone will be a winner. I understand that there is a plan to port Android onto the Touchpad - the Touchdroid project. Time will tell how this pans out. In the meantime, here is a video giving a brief history of the Linux project; I have been using the open source operating system since 1997, and it has definitely enriched my experience of computing.
Posted by Hugh at 7:03 pm