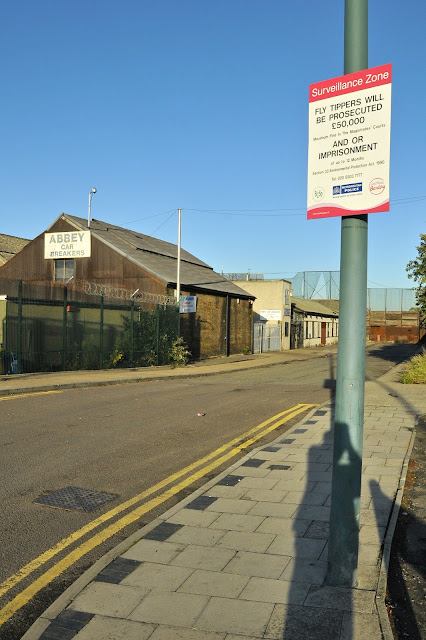 I took the photo above on Saturday evening; the light was excellent, and it was such a change from the earlier torrential rain we suffered. The shot shows Abbey Car Breakers in Wheatley Terrace Road, behind Morrison's car park. The area is notorious for fly tipping on an industrial scale. I have personally witnessed tippers in action on a number of occasions. The Police and Council have worked together to make the road a surveillance zone, as per the no - nonsense lamp post sign above. You may also notice a fairly innocuous addition to the roof of one of the warehouses used by Abbey Car Breakers. It is a high definition digital CCTV camera, dedicated to recording any local criminality such as fly tipping and vandalism. You can see a close up of the camera and mast below - click on either image for a larger version. I regret the need for such measures, as it does push the area one step closer to the "Truman Show" style police state, but to be honest, I just don't know what the alternative is. If people were more honest, upright and trustworthy, then maybe another course of action could be taken - as it is, the illegal dumpers and fly tippers are such law breaking scum that the authorities have to use whatever sanctions are available to them in order to protect local people and the environment. 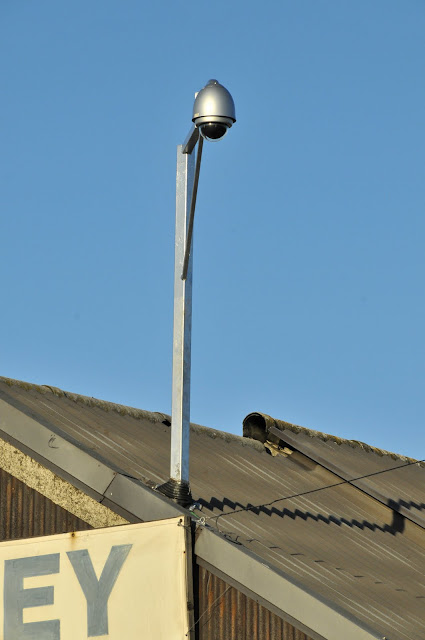 I saw a most perplexing and surreal scene whilst waiting for a train back to Erith from Plumstead after visiting my Dad on Monday afternoon. I was waiting on the Kent bound platform, for a train to convey me back to Erith. I saw a shadowy figure on the opposite, London bound platform. She was dressed in a flowing black robe with a grey hijab. She was lurking around the back and side of the long closed and abandoned coffee kiosk on the London bound side of the platform. Her furtive actions spurred my interest - I am always fascinated by anything out of the ordinary, and this piqued my attention.  It was around 2pm and I noticed that she was holding a takeaway pizza box - and furtively stuffing her face with pizza. Nothing exceptional there then in a normal environment. The thing that made me think was that she was from her behaviour and dress quite obviously Muslim, yet she was eating, in public during the daylight hours of Ramadan. I don't think that she was ill or pregnant either - why else would she be acting in such a secretive and furtive manner? I get the impression that she was just getting one over on the system which she did not necessarily agree with. Mum reminded me that some time ago she was a passenger on a bus with a similar situation - a burkha clad woman was eating a sausage roll - just when did pork get the OK from the Mullahs? It was a bit like seeing a nun clasping an opened can of Stella.
Earlier this week Erith McDonald's Drive Through (NOT "thru" - please!) Had a huge branded promotional barrage balloon floating in the sky above the building. I began to wonder exactly why the balloon was there - were the management expecting an air raid from the Burger King Luftwaffe or something? Utterly pointless - apart from being a major distraction to drivers passing the junction of James Watt Way and Queen's Road.

In the aftermath of the Woolwich riots, there has been a backlash of community spirit and plain common sense. This can be epitomised in the website We Love Woolwich. Do give it a look.

James May has come up with an interesting theory relating to the purchase of used cars; one should aim to outlay no more than £1 per cc of engine capacity for a general purpose run - around, or what he calls "an old biffer". For example, if you purchase an old car with a 2 litre engine, he postulates you should expect to pay no more than £2,000 for it. This is an interesting and somewhat thought provoking concept - your thoughts and comments below if you will.


Something that might quite surprise you is that the price of old Betamax video recorders is currently going through the roof; a couple of years ago you could not give one away if you tried. Suddenly they are turning up on Ebay and the bidding competition is fierce. Prices of £250 and upwards have been noted. What is the reason for this? Well, it does not seem to be down to any love for the outdated video format (which whilst it failed in the domestic home market, it was the cornerstone of many TV news and outside broadcast units for many years).  It would appear that people are coming across family videos recorded on Betamax cassettes and wish to digitise them. Most professional video transfer services can handle VHS and the common broadcast formats, but very few are capable of doing anything with a Betamax format cassette. People with old recordings of weddings and family events realise that if they wish to be able to see them again, they will need to locate a device capable of playing the tape format - hence the sudden upsurge of interest. The ironic thing is, it is pretty likely that the tapes will be unwatchable even when a suitable player is used. Both Betamax and VHS cassettes deteriorate over time, even when stored in ideal conditions. A thirty year old video tape will have demagnetised and printed through so much that it will almost certainly show on screen as a mess of flickering static with a few undersaturated, ghostly images of what remains of the original recording now. 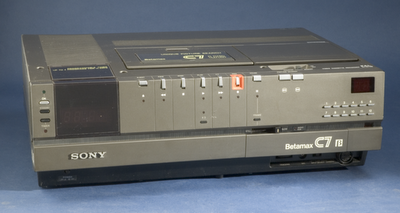 I recently have read quite a lot about the format wars between VHS and Betamax back in the early 1980's. From all that I have read, it became apparent that Sony, the creators of the Beta format were pretty much to blame for the demise of what initially was a far technically superior video format than the relatively pedestrian VHS system. The real Betamax killer was that for the first few years, the maximum length of recording was limited to one hour on Beta, whereas VHS could stretch to four hours, critically long enough to record an entire American football game (the lucrative mass American market both systems were looking to crack). Sony had the attitude of "We know best" as to what the market wanted, and ignored requests for features that quickly became standard with their competitors. Consequently Betamax is now considered alongside the 8 - Track cartridge as a dodo technology. You can read about the history of the video format war by clicking here. If you are of the opinion that Betamax is far too mainstream, well known and commonplace, do yourself a favour by visiting the Philips V2000 web site here. You can also read more about other format wars by clicking here.

I was standing at the 99 bus stop in Erith town centre yesterday morning when a local family rolled up - mother and father about 20 years old, and a brood of three kids ranging in age from about six to maybe a year old child in a push chair. Bearing in mind this was about 11 in the morning, they were all already eating a greasy McDonalds meal. the parents were talking (okay, grunting and swearing as is the Chav norm) and as they did so, they opened up their cholesterol laden burgers and nonchalantly tossed the pickled gherkin slices from the patty, onto the floor without so much as a beat. I was livid - the little slices are very slippery and plenty of elderly and infirm people use the area; it was the incredibly casual attitude to littering that really annoyed me. I bit my tongue as if I went into one it would have been in front of very small children. The Captain Tweed element in me wanted to knock their gel encrusted heads together - I don't think I will be so reticent if I ever see it happen again. The sad irony is that the gherkin would have probably been the only green vegetables the social inadequates would have ingested all week had they not chosen to decorate the path with them. 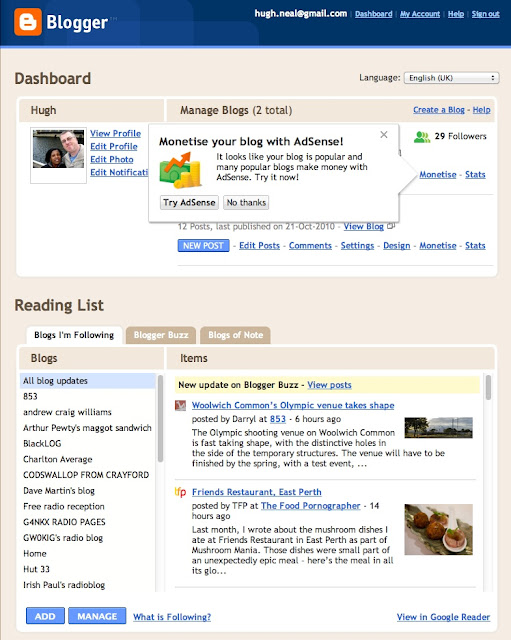 Now that the Maggot Sandwich has attracted so many regular readers - currently at nearly 45,000, there has been some pressure on me from a number of vectors to accept advertising, and actually make some income from the Blog. I am not keen on this particular course of action however - despite pressure from a number of sources otherwise. The problem with accepting advertising is that one becomes beholden to the advertising source  - I would lose my independence and ability to whinge as I see fit. I would rather keep my independence than sell out to make a few quid at the expense of my ability to express my opinion.
Walking through Morrison's car park on Saturday afternoon, there were a number of badly customised Citroen Saxo "acne carriages" parked together, with their owners lounging about and chatting; I clearly overheard one chav saying to his compatriots (whilst pointing at his designer trainers) "I only wear shoes to weddings, funerals and going to court". I somehow don't think he was a Magistrate or other justice official. What a pity.

The video this week is the recipe for a simple Chinese fried rice - do leave a comment below and let me know what you think. All comments will be moderated and published within 24 hours.