Captain Tweed versus the Stella Terror. 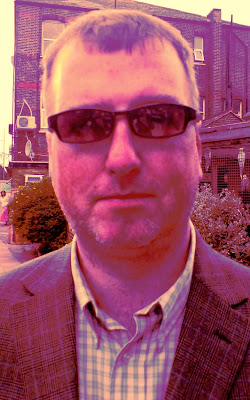 Captain Tweed had an encounter with a truly undesirable character that I can only name the "Stella Terror", as I don't know, or indeed wish to know his given monicker. I was on my way back from seeing Shirley down in Chatham, and was sitting on the train reading a copy of Metro that someone had discarded, when from the other end of the carriage I could hear a raised and slurred voice. At first I could not quite make out what was being said, but then shortly the reek of cigarette smoke started to permeate throughout the carriage. A man of about fifty was swigging from an (almost inevitable) can of Stella Artois lager and puffing away at a cigarette. Since both of the activities are illegal as well as being unthinking, selfish and antisocial, it understandably provoked my ire. I thought I would see if the scrote would get off at Northfleet Station, but unfortunately not; he stood, talking loudly to a young bloke who was trying to reason with him to put out the fag. His response was to hammer on the door of the locked toilet. After getting no response (many train loos are locked and out of service due to vandalism) he then threatened to urinate in the waste bin; at this point a woman sitting nearby moved down the carriage towards where I was sitting - she was visibly shaken. At this point I went into full Tweedinator mode (tm). Approaching the drunk and slovenly waste of protoplasm, I firmly told him to put the cigarette out as it was a criminal offence to smoke on public transport and that the consumption of alcohol was also banned. He was not overtly aggressive towards me (this was in my opinion a mix of him being somewhat physically intimidated, and the fact he was unable to string a coherent sentence together). He did manage to jab his fist, complete with attached fag in my direction, just as we pulled into Dartford station.
I got off the train and spoke to a nearby station assistant; she got onto her radio and within only moments two British Transport Police were on hand - a really impressive performance I thought. I explained what had happened to the two coppers and pointed out the offender who was skulking on the carriage, trying to stay out of sight, despite emitting a haze of fag smoke and alcohol. The police hoiked him off the train with one on each side of him; they checked him for weapons and made him stand to one side as an additional PCSO took notes and a mini statement from me. When I gave my home address upon request, the scumbag commented "I know that road - a nice area". I stopped mid sentence to respond "Are you threatening me?" and to the PCSO "Please note that I have just been verbally threatened". I then turned back to the scrote and said "Don't even think about it" or something to that effect. Actually I am pretty sure that he was too addled to remember any details - I don't think he is going to turn up on my doorstep - and if he did, he would regret it. Briefly.

The Transport Police were running a criminal database check on the perpetrator when I had to leave them to catch my connecting train back to Erith station. I was told they would give me an update on the incident some time later this week. I will let you know if anything comes of it, though I am not holding my breath.

On a completely different thread, I was making some notes for future Blog entries the other day; I made a heading of "Heroes" and started listing down names of people who I regard as being a hero in one way or another. The list included: Alan Turing, Freddie Mercury, Leonardo DaVinci and Kenneth Williams.

This week's video clip is possibly the most important one I have ever posted. I strongly urge you to make the clip window full screen (visit the video page here - you have the full screen option which you don't unfortunately get in my embedded video), close the curtains, or switch off the light and turn your computer speakers up loud. The video is a CGI simulation by staff at NASA of what would happen if a large asteroid were to impact onto the Earth today. The visuals are overdubbed with the track "The Great Gig in the Sky" by Pink Floyd. If this does not freak you out I doubt anything will. Please leave comments on the link below.
Posted by Hugh at 4:47 pm