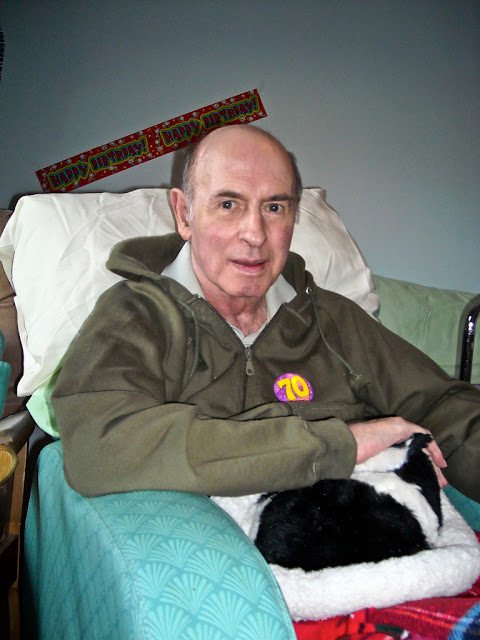 I have often mentioned my Dad, and visiting him in his nursing home as part of my weekly Maggot Sandwich update. The commute from my office to visit him has on many occasion provided a rich source of interest as I have battled low lives, fare cheats, and those who misuse the public transport system. You may have noticed that whilst the visits got mentioned in passing, I have never detailed exactly why he was being cared for in a local nursing home (the utterly magnificent Gallions View home in Thamesmead, located behind the Woolwich Royal Arsenal housing development, and almost directly opposite the London City Airport, on the other side of the River Thames). To be honest, I thought that it would have been an intrusion on his privacy, and unfortunately he was for much of the time unable to express an opinion on the matter, due to his his advancing dementia - he suffered with Multi System Atrophy / Lewy Body Syndrome.

My Dad, Brian Neal, died yesterday evening at 6.20pm, after an illness that had lasted nearly ten years. I, and his other close family were with him, and his end was peaceful. He always said "I can't complain, there are always others worse off than myself", and throughout many long years of suffering, he never did once complain; even towards the end of his cruel illness, when he had been robbed of speech and almost all movement, he would still entertain the nursing staff by making silly faces and with his brilliant smile, which would light up the room. His funeral will be a private affair - dress will be colourful - no black is permitted. His coffin is going to be made of eco friendly, quick growing woven wicker, with a cotton lining. Donations, rather than flowers would be preferred - the charities supported are Demelza House, The Kent Air Ambulance and Alzheimers UK. I have now removed the privacy controls on the photos of him in Gallions View nursing home, and you can see some photos of him from a couple of years ago, during his 70th birthday celebrations here.

Normal Maggot Sandwich service will be resumed on Sunday, though the Blog posting may be a little shorter than normal. Thanks to everyone who has emailed me with condolences and sent me cards - they are all greatly appreciated, and I will be in individual contact as soon as I can.
Posted by Hugh at 9:42 pm