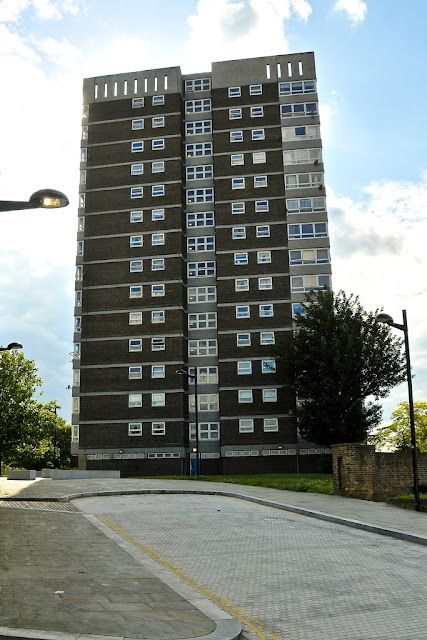 One of the apartment blocks that overlook the River Thames, and the Riverside Gardens. The blocks are well looked after and quite a desirable address in the area. Click for a larger view.

I must say a heartfelt thank you to all the people who have contacted me to offer their condolences over the last week; it has been comforting to know how many people cared for my Dad and knew about his illness. I think it fair to say that he had finally had enough. The blog is a bit on the shorter side this week, as I am joining my family in a visit back to Gallion's View nursing home this afternoon to make a final thank you to the staff for all their superb work in caring for Dad for the last six years of his horrible illness.
I get the feeling that some people think I make up, or at least exaggerate for effect when I encounter low - lives on public transport Nothing could actually be further from the case. On Saturday morning Uncle Bob (who is over from the USA for my Dad's funeral) and I were travelling up to London for a visit to the Museum of Docklands. Sitting in the block of seats behind us were four geriatric chavs, who spent the entire London bound journey discussing the best way to A) avoid buying a train ticket for any journey whatsoever, B) to circumvent the ticket barriers at football matches to avoid buying a ticket, C) how to return clothes for a cash refund after having shop lifted them in the first place, and finally, D) what skin cream to use when the court imposed electronic tag causes skin irritation to a recently inked tattoo. The scumbags seemed to spend more time and effort evading paying for things than seemed to make any logical sense - it seemed to me that it would have been simpler and more straightforward to have legally paid for stuff than have gone to the extra time, effort and risk of taking things the illegitimate way. The scrotes also mentioned their involvement in the recent rioting, and how they were worried that the noose was closing in on them - I for one am glad they were worried, as it would seem that the Police are still working through hundreds of hours of CCTV footage looking for evidence of wrong doing. You can read more about their efforts here.  One has to factor in the woeful lack of intelligence in the individuals involved, none of whom could have chewed gum and walked at the same time.

Darryl of the excellent Woolwich and Charlton based 853 blog reports some very good news. The old cinema / seedy nightclub building in Wellington Street, Woolwich has got permission for its' refurbishment and relaunch as Woolwich Grand Theatre. It will be an independent theatre and cinema, with a weekly market and daily open cafeteria. I sincerely wish it well. You can read more about it on the 853 blog here.
I have been banging on about scrap metal thieves and the illicit money to be made from stealing copper cabling for as long as I can remember. The Register website recently wrote the following thought provoking piece on the issue - an excerpt is featured below:-
British Telecom is, as a telecoms company, worth minus £30bn. Yes, that's a negative number there. And yet it is literally sitting on top of billions in assets. The BT network relies on more than 75 million miles of copper cable - 132kg per mile. Which by the miracle of multiplication can be seen to be about 10 million tonnes of copper. Which, at current LME prices of just over £5,000 a tonne, is £50bn. People are stealing the cable, as we all know, because the metal is incredibly valuable. Strip the sleeve off the cable, drop it off at an accommodating scrap yard and get paid in cash. And as BT themselves say, (and yes, I've checked that they really do mean this) they've 75 million miles of this stuff festooning the countryside. BT's current market capitalisation is just north of £20bn. So, as an operating telecoms company they're worth £30bn less than the mountain of copper they're sitting upon: that is, they're worth less than the physical assets or they have, as a telecoms company not a mountain of scrap copper, a negative value. OK, OK, yes, this isn't quite right. There's labour involved in digging up all that copper, not all of it will be 10 pair (some of it will be heavier, 25 pairs or 50 pairs), not all of a cable is copper and copper wire scrap doesn't get the LME price; However, we are still in the right ballpark here: the value of the copper in the wires is of the same sort of order of magnitude as the value of the company as a whole. Which leads us to two useful conclusions; Firstly, there is a good reason why no one is ever again going to wire an entire country with copper. Fibre makes more sense now, as does going entirely mobile and ditching a landline network. Developing countries certainly aren't going to want to buy that much copper; Secondly, it's a shocking indictment of Britain's criminal classes. Really, why is anyone bothering to go and nick a few miles of the stuff when you could buy the company and take it all? Asset-strip BT and come out with more money after selling the copper than the company cost you in the first place. 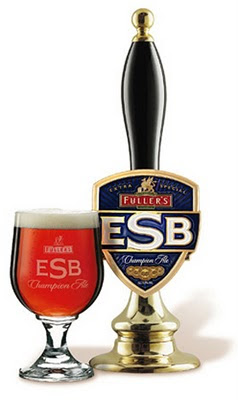 The Dial Arch pub in the Woolwich Arsenal housing development is celebrating Young's Brewery's 180th birthday - a fact that is both sad and ironic, as I recently reported, Young's are giving up brewing in order to become a purely pub management company, thus leaving Fuller's as London's only local brewer. Young's merged with Charles Wells, and moved their brewing facility to Bedford back in 2006, and the rot really set in. Things have been going downhill as far as the brewing of quality real ales is concerned, and one can only worry as to what is to happen to their business from now on. Bob and I went for lunch yesterday in the Cat and Canary pub in Canary Wharf, and it really highlighted where Fullers are beating Young's. The beer (Fullers' ESB) was excellent, and the food service was swift and well executed. I had a steak sandwich (thinly sliced medium rare rump steak served in a freshly baked baguette, with a tomato and roasted red pepper sauce, along with a large dob of hot English mustard, served with sautéed new potatoes and salad). Bob had a retro, but very tasty grilled fish finger sandwich on malted brown bread with tartare sauce and a side salad. It was well made, reasonably priced (considering this was Docklands) and served within 15 minutes of the order being placed. Not quite Robin Hood & Little John standard, of course, but very good indeed.
The troubled area around the Thamesmead retail park has had yet more issues this week; a lad was stabbed there, after an altercation with a large number of youths; details are still sketchy, but it would appear to be a gang related attempted murder. Hopefully the Police will arrest those responsible in short order.
Last week I featured the excellent, fan made documentary "Star Wars Begins". This week the follow up movie "Building Empire" is featured. I strongly suggest that you put aside a couple of hours, maximise the YouTube window to make it full screen, and watch the excellent film, which scene by scene shows how The Empire Strikes Back was made, along with cut scenes, bloopers and commentaries from the cast and crew. I regard this as essential watching. Please feel free to leave a comment below, as always.
Posted by Hugh at 6:48 pm