The ballad of Larner Road. 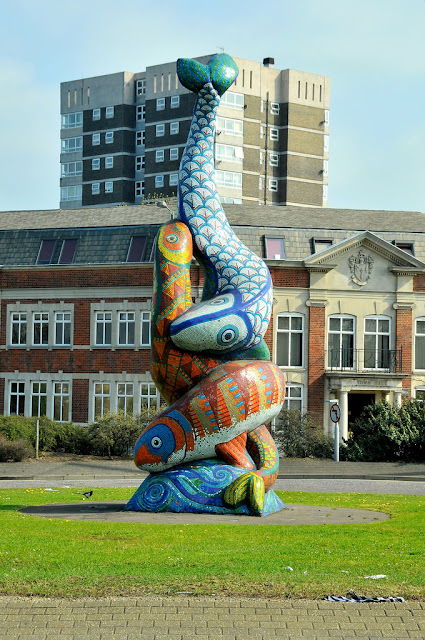 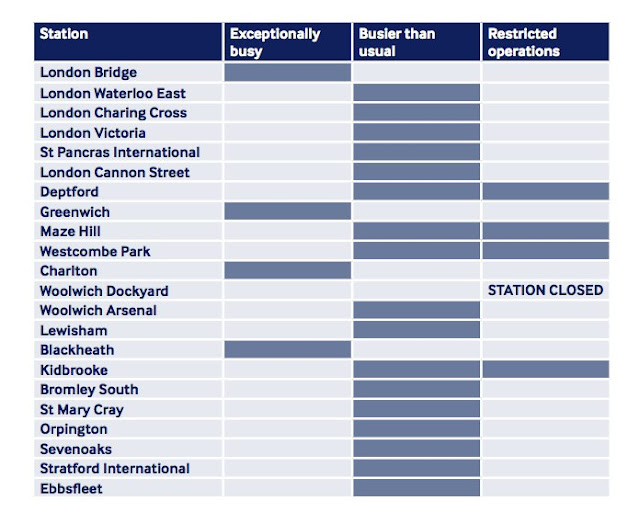 More Olympic related doom and gloom (though I promise after the next paragraph I will shut up about the negative sides to the tax payer funded white elephant international sporting event, and talk about something else). The local overground train service special timetables for the period of the Olympics and Paralympics, and as feared, several stations on the Dartford to Charing Cross / Cannon Street / London Bridge line are going to either be closed, or have the number of trains stopping there seriously curtailed for the duration. one thing that does occur to me when consulting the table above is that though some stations on the Dartford / Erith / Greenwich / London line are mentioned, not all are - both Abbey Wood and Erith stations are not covered, even though these are two of the busiest stations on the line. It would seem that once again we do not matter. As previously mentioned, I am fortunate in that I will be able to work from home for the duration of the events, but many people in the local vicinity will not. There is no practical alternative to journey into London by public transport other than the overland train. We have no tube, the DLR does not start until you get to Woolwich Arsenal (and it looks like it is going to be incredibly crowded over the period of the games) and the Crossrail development from Abbey Wood is little more than a scrape in the earth surrounded by heavy construction vehicles for the foreseeable future, though I do understand that building work and earth clearance has been stepped up for the month of June, with contractors working from 8am until 9pm each work day; much concern has been expressed by residents of Plumstead and Abbey Wood about the increase in noise the extended building hours will bring. You can read more about the project, and the efforts to keep noise and disruption to a minimum by clicking here.
True to their usual form, Microsoft announced their entrance into the computer tablet market earlier this week, by showcasing their new “Surface” device. What they did not announce was when it would be available, or how much the two models will cost. This is typical Microsoft behaviour – make a vast, sweeping announcement about a forthcoming product, get lots of press coverage, then produce an actual product some months later which roughly resembles that which they launched, at an even higher pricing point than commentators guessed at. Microsoft did not create the concept of Vapourware, but historically they have been prime exponents of it. I think the “Surface” tablets look interesting; many tech journalists have noted that Microsoft are not keen on making forays into the hardware market – the Zune music player being a classic example of a product that failed so badly it ended up not even being released outside of the continental USA, and countless thousands of the players being consigned to landfill. The only hardware Microsoft have so far released that has been a sales success has been the Xbox range of consoles, and the amount the firm has spent on subsidising the purchase price and marketing the product probably means the actual bottom line profit has actually been minimal. The Surface is a bold move for Microsoft – there will have had to be a substantial investment to get the hardware designed and fabricated, something the company normally eschews – after all when your primary business is software and support services, where the production overheads are relatively low, and the repeat costs are zero, getting involved in actually making a physical product is a real challenge. They don’t really have a choice if they want to remain credible with their shareholders – the market in tablet devices (and indeed portable music players, as Microsoft have already found, to their cost) is dominated by Apple, with Google quickly closing with their Android operating system being installed on devices supplied by a myriad of companies. Microsoft know that if they don’t make a viable go of producing a tablet device that actually takes some substantial market share, they will be out of that market, just as the late arrival of the Zune (complete with technical glitches) did not make a dent on iPlayer sales. I sincerely hope that Microsoft do well with the Surface – the market could do with some solid competition, and thus in the end, better devices for the consumer. 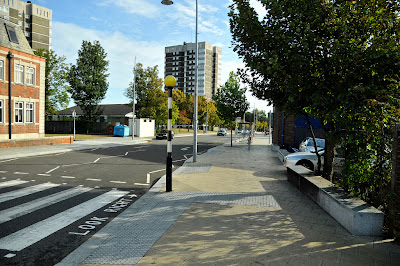 The mealy mouthed talk backers who seem now sadly to frequent the News Shopper website have had another field day this week; as soon as it was announced that Erith post office will be one of a tiny handful which will be permitted to sell the collectable Olympic gold medal winner stamp, they got in front of their computer keyboards to whinge. The plan is that when an athlete wins a gold medal, a stamp featuring that athlete will be printed and made available for sale within 24 hours of the event. (The cynical part of me wonders if they will actually print stamps far ahead of the event with images of all of the likely winners, then just pulp the ones that don’t depict the actual winner).  There has also been a second, connected article prompted by the chairman of Sidcup Philatelic Society, saying that the stamps will be a poor investment. Anyway, comments such as “What a stupid choice, we all know the residents of Erith only go to the Post Office to cash their giros” have become wearyingly common.  As I have previously written, at this rate it is not going to be long before a comment that is legally actionable is made. The News Shopper really needs to moderate comments to their website. Talking of comment moderation, I had hoped to once again permit unmoderated comments on the Maggot Sandwich, but I am currently beset with spammers trying to get what look like genuine comments posted – their comments actually contain embedded HTML to try and hijack the web browser to redirect to some dodgy sites – mostly involved with dubious pharmaceuticals or fake designer hand bags.
Here is a nice video clip - it shows aeroplanes from the Battle of Britain Memorial Flight over central London during the Queen's Jubilee celebrations. Best to click on the button on the bottom right of the window to make it full screen - it is in High Definition, and you can really appreciate this on a large screen. Please note that the illusion that several of the planes' airscrews (the correct name for propeller) are moving very slowly, or not at all is caused by a stroboscopic interference effect between the rapidly rotating blades and the digital shutter on the HD camera.

Last week I wrote about the 100th anniversary of the birth of Alan Turing, an event that got some coverage in the popular press. Turing was not the only genius working at Bletchley Park; others such as mathematician Bill Tutte and electronic engineer Tommy Flowers did work that was equally important, but they never received the recognition they deserved. The video below is a one hour long fascinating documentary on the two men which was made by the BBC. It tells the story of how a team broke the German Lorenz Cipher, a code even more fiendishly complex and difficult to break than the better known Enigma. Watch and feel free to leave a comment below.
Posted by Hugh at 3:22 pm