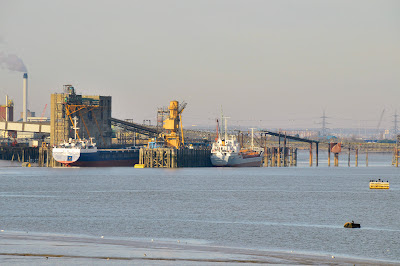 The photo above was taken by me; it shows the view upriver towards Lower Belvedere. you can see two bulk carrier ships moored on the jetty behind Erith Oil Works. The ships contain bulk grain which is converted into various kinds of edible vegetable oils in the works. There is actually a bit if a mystery surrounding the place; I did a company search on Erith Oil Works, and it would appear that the last time they filed any company records was back in 2006. Since then the company has been dormant. The factory is still working, producing cooking oils and the like, so all I can assume is that it is now trading under another name, or has been taken over by another company. Anyone got any ideas? Please let me know. 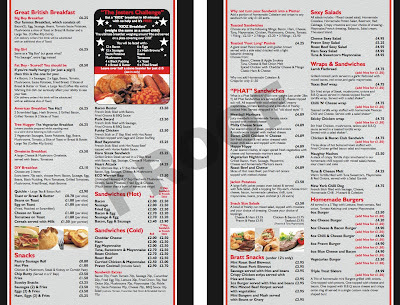 The BBC have been running a documentary series on obesity and its’ causes. The programme is called “The men who make us fat” and the second episode featured a cafe in Great Yarmouth called Jester’s Diner. It is a fairly standard “greasy spoon” type place, with one notable exception; not only is their menu somewhat larger and more varied than the average transport caff, but they have jumped on the American bandwagon of having their very own, English style food challenge. You can see a copy of their menu above – click for a larger view. Their challenge is called “The Kidz Breakfast” due to the fact that it weighs the same as a small child – around nine and a half pounds, and is served on a platter over 2 feet in diameter; the details of what it contains are shown on the menu above - click on it for a larger view. This gargantuan blow out defeats almost all those who have attempted it, with the exception of one individual who finished the mountain of food in an almost unbelievable 26 minutes, way short of the one hour limit the challenge imposes. What is even more amazing is that the successful challenger was as skinny as a rake – as is actually often the case with the very best competition eaters. The Jester's Diner has gained a huge amount of free publicity over their challenge, and the original BBC coverage has now made it onto Youtube and thus is being shown around the world. It may be a sad day for cardio vascular surgeons, but I have a sort of grudging admiration for the small businessman running the establishment – he’s managed to garner the equivalent of a multi million pound advertising budget for free, simply by using his ingenuity. A vast majority of his customers would not dream of attempting the challenge, but would happily consume his rather more conventional fare. I think he deserves credit for finding a novel kind of guerrilla advertising, and running a successful hospitality business in the height of a recession; I think we could do with more entrepreneurs like him.

I noticed some workers at Greenwich station last week; they were constructing an elaborate structure of wood and scaffolding on the outwards from London platform; it would seem to be a second exit for travellers from London for the Olympics.  Bearing in mind the bottle necks for passengers when entering or exiting the station from either side, it is something that is more that necessary; though I did think the exit and stairs did look a bit on the rickety side, but they were still somewhat of a work in progress, so I had better wait and see.

From today, swimming in the River Thames anywhere between Crossness and Putney Bridge is banned. Whilst Erith lies just outside the banned area; I would strongly recommend against taking a dip in the river. Whilst is is much cleaner that in years of yore, it is still pretty unsanitary, and the Thames has a huge tidal variance, along with strong and unpredictable currents which make it a very dangerous proposition. You can read more about the ban by clicking here.


Another technology birthday happened last week; it was the 40th anniversary of the creation of American hardware and software company Atari. Not many people are aware that the creation of Apple Computers might not have ever happened if it was not for Atari. Apple co – founder Steve Wozniak was employed by Atari to work on their innovative video game Pong in 1974. Wozniak farmed out some of the circuit board engineering work to his friend Steve Jobs, who was at that time working for Hewlett Packard. After this turned out to be a massive success, the two men went on to form the Apple Computer company (as it was then known) and produced bare circuit boards for the Apple 1 computer. The rest, as they say, is history. I won’t bore you with more on Apple; suffice to say that whilst Wozniak was an idealist and a bit of a hippy, Jobs was the business brains – and by many accounts, not the nicest of people. Meanwhile, Atari grew with the launch of their groundbreaking 2600 video games console in 1977 which dominated the early video games market until the early 1980’s. Atari decided to take a lead in the burgeoning new home computer market, boosted by the millions of dollars of profit that the games console generated. The first Atari computers were the 800 and 400 models – the 400 was basically a cut down 800, which itself was a bit of a shameless clone of the Apple II, but with better graphics and sound. Back in the eighties I had a Saturday job whilst I was at school; I worked for a Sidcup based technology company called Silica Shop, which were for a few brief years the largest independent computer retailers in the UK. They sold a wide range of computer hardware and software, but they specialised in Atari kit. I worked in their shop in Hatherley Road for several years, and then was transferred to their shop in Tottenham Court Road. I can definitely say that what I learned then has helped me in the career I have now. I was fortunate to be in on the explosion of home computing in the early eighties and got to witness a lot of the developments and characters involved first hand. Celebrity customers who used to regularly ask for me to serve them included Paul Daniels the magician (a horrible little self important git), Trevor Horn the record producer (a lovely, down to earth guy who was really into war games) and Alan Sugar (no knighthood or lordship back then – a regular guy, not the monster caricature you see on television). I once fixed a blown fuse in his Rolls Royce – though I did not get a tip for my troubles. I once was chatting to two blokes in the Tottenham Court Road store when they invited me to come and visit them in their studio a couple of roads away; during my lunch break I visited the basement in a large and quite impressive stone building. The guys welcomed me into a darkened room filled with cigar smoke and all sorts of high end electronics that I could not identify. They then showed me a few clips – probably not more than thirty seconds of computer animated footage and asked my opinion. I was blown away – it was better than anything I had ever seen (to be truthful, at that point I don’t think I had seen much CGI – it was a very new field back then). After a few minutes chat and a horrid cup of coffee I was shown out. I was impressed, but did not know what the footage was for. A few months later I was watching a music programme on TV (It may have been The Tube – I cannot recall) when I mentally stopped in my tracks – the CGI footage was being shown. It was the video for Dire Straits – Money for Nothing. I was gobsmacked – I had seen the making of one of the most famous music videos ever, from a band that were at the time pretty much the biggest on the planet.
I did think I should ask my readership something that has been troubling me for a while; as you know I am ambivalent at best to the whole Olympic Games, and especially to the manufactured history surrounding symbols such as the Olympic torch parade. I know that some people are fully supportive of the Olympics and are looking forward to the spectacle and the events themselves. I have a long held, live and let live philosophy of “if it works for you”. My dilemma is that the torch parade will be heading directly past the front door of Pewty Acres on the 23rd of July. My personal inclination is to ignore the Nazi created torch event, but since the Maggot Sandwich is designed, at least in part to reflect what happens in Erith and the surrounding area, what do YOU think I should do? Should I follow my instinct in resolutely ignoring the whole event, or should I take my Nikon out to get some photos, even though this would leave me feeling intensely hypocritical? Answers to this moral dilemma on a postcard, or better still, leave a comment below.

Here is an intriguing bit of film making; it is the stop motion animation of the stripping down and refurbishment of a Triumph Spitfire 1500cc four cylinder engine. Even if you are not particularly interested in cars or engines, it is a fantastic piece of animation, with a twist at the end - do watch and see what you think.