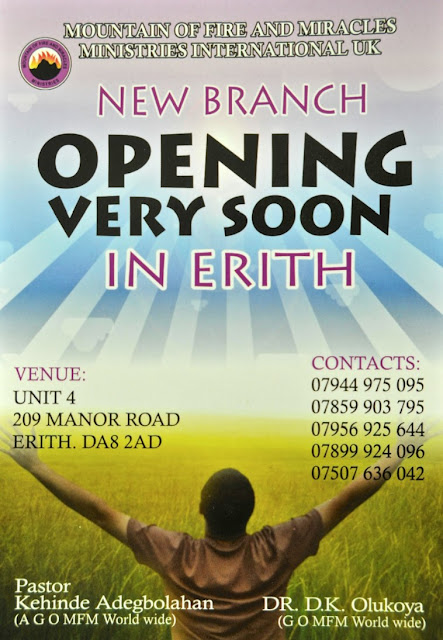 A new African church is opening in Erith in the next few weeks. The Mountain of Fire and Miracle Ministries (see the photo above - click for a larger view) is set to occupy one of the empty industrial units on the Manford Industrial Estate off Manor Road. I don’t know if they have planning permission for the change of use from light industrial to a place of worship, but to be honest I cannot see much of a problem. The industrial estate is a long way from any residential housing, it has plenty of parking; the 99 bus has a stop almost right outside, and they will be able to make lots of noise and not disturb anyone. There has been a bit of an explosion in the number of African churches in and around Erith in the last few years – reflecting the demographic change in the local population. There is one adjacent to the hideous fish sculpture roundabout – The Redeemed Christian Church of God, which occupies the “Praise Ministry” at 33, Bexley Road - the former tyre warehouse behind the kebab shop. They tend to have very noisy services, and have been in trouble with the council over exceeding their permitted car parking quota. The Celestial Church of Christ shares the same building, though I am unsure of the precise mechanics of their co-operative arrangement, but it seems to work for them anyway. There is also a church using one of the industrial units located just off Birch walk, though details of it remain hazy – and their web domain seems to have a lapsed registration, so they may well have moved on. I recall on one occasion, the Redeemed Christian Church of God’s mini bus broke down right outside my front door several of the passengers got out and started praying for their transit van to be fixed by the almighty, whilst one slightly more pragmatic person got on his mobile phone to the RAC. One thing that unites all of these churches is their impressive and rather flowery names. I have done some web searching on all of them, and it would appear that they all have origins in Nigeria. Shirley once told me that generally, the more imposing and impressive an African churches’ name, the smaller and less impressive they were in reality. They all seem to make decent money from their activities; it will be interesting to see how the new Mountain of Fire and Miracle Ministries does when it opens – from what I have observed, business would appear to be good. 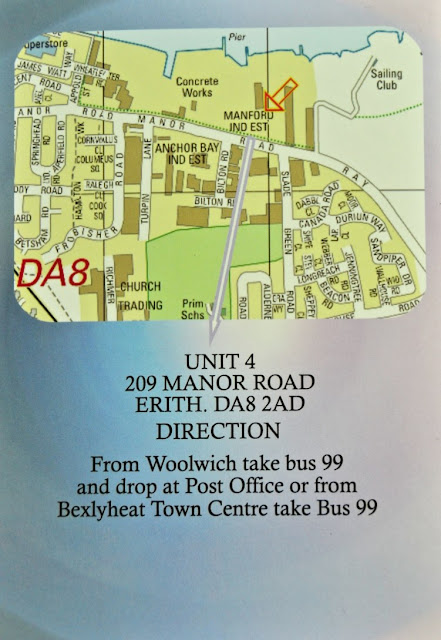 One thing I find that many of the local African churches have in common is that they invest heavily in high quality, glossy promotional material like the A6 sized card flyer depicted above. The card is of good quality, and the full colour printing would not have been cheap. What astonishes me then, after all this attention to detail, the leaflets invariably have one or more glaring typographic errors. If you look at the travel directions in the photo above, surely someone would have noticed the missing "e" (thanks Malcolm!) and "h" in "Bexleyheath" before the flyer went to press? Somebody should be kicking themselves.
Corduroy trousers. It has been a very long time since I have had a quality whinge about anything, so I am now making up for lost time. I was recently bought two pairs of corduroy trousers as part of my birthday present – both pairs were from Marks and Spencer, not some cheapo outlet. Both pairs of trousers have worn out with little over a weeks’ wear each. The area of wear is at the top of the legs, where the material has already worn so thin that you can clearly see light through them. Are there some restrictions to the wearing of corduroy that I am hitherto unaware of? I don’t exactly have legs like a rugby player, yet two pairs of supposedly superior quality trousers have worn out in what to me is a completely unacceptable time period. I would have returned them, but unfortunately I no longer have the receipts. Very annoying and frustrating. Avoid Marks and Sparks cords!

I am absolutely gutted to hear of the death of Neil Armstrong. The man was diffident about what he had achieved, correctly saying that he was only one of a team of nearly 400,000 involved in the Apollo programme; nevertheless he was the first human being to set foot on the moon, and in doing so he changed history forever. Whatever the naysayers and conspiracy theorists may say, Armstrong's footprints in the dust on the moon will be his memorial for millennia to come.

Erith was for much of the twentieth century the home of one of Britain’s biggest and best known toy brands. The Mobo Toy Company had a factory and offices in West Street, which opened in 1946. They made metal “ride on” toys such as the Bronco – a metal toy horse that the child could ride on, It worked by the rider sitting on the horse and pushing down on the stirrups, then releasing them and then the horse moved along. From 1947 to 1950 the Bronco could only be steered in a straight line, but in February, 1950 Magic Steering was introduced. This enabled the rider by pushing on either stirrup to move the horse in that direction. The Bronco was so popular that it stayed in production until 1971. The company also made a range of other ride on toys in a range of bright colours. The “market research” was primitive – the pupils of West Street School were consulted, and their choice of a yellow and red colour scheme became a trade mark for the company. The American Market was an amazing success for the MOBO Company. In 1948 they exported to the USA half of the total toy exports of ALL British Toy Companies. At this time Britain was recovering from the Second World War and steel was rationed according to the amount of goods exported. Mobo never had any trouble obtaining supplies because of their excellent export record. A New York office had been opened in 1948 at the Breslin Building, Broadway, New York and an American subsidiary formed Sebel Products Inc. Other major markets were Australia and South Africa. By the late 1960’s there was intense competition from cheaper toys from the far East, and after a reorganisation, the West Street works was closed in 1972 and all toy production ceased. You can read more about the history of Mobo toys by clicking here.


You may recall that a few weeks ago I expressed my concern about the seemingly unopposed spread of RFID chips in new debit and credit cards, and the fact that such chips can be remotely read by crooks with relatively simple equipment. I predicted that this is going to become an increasingly common vector for fraud. Some enterprising manufacturers have taken this information on board, and are now producing RF shielded wallets and card holders. The devices claim to block the signal from the card whilst they are enclosed in the device. Mobile phone companies are also encouraging users to adopt swipe able phones, though the initial take up appears to have been slow. The problem with all of these devices is that the technology is insecure. Our entire system of currency and exchange is based on trust, and we seem to be hell bent on handing that trust to organisations that have repeatedly proven themselves to be untrustworthy. It is bad enough that we have to deal with the serial offenders such as the big banks, but now the public are being asked to trust their confidential information to mobile phone network operators as well – the very companies that can barely keep their own networks up and running, let alone secure from hacking by tabloid journalists. I seriously question the wisdom of allowing such incompetents access to your personal information. Once your phone data and bank details are lifted simultaneously from your smart phone, you will be shafted by everyone from Russian gangsters to Nigerian scammers before you have a chance to draw another breath.

The video this week is of Genesis live in 2007 - during their European tour - the track is Los Endos.