The Auto Stacker and the Russian Tank. 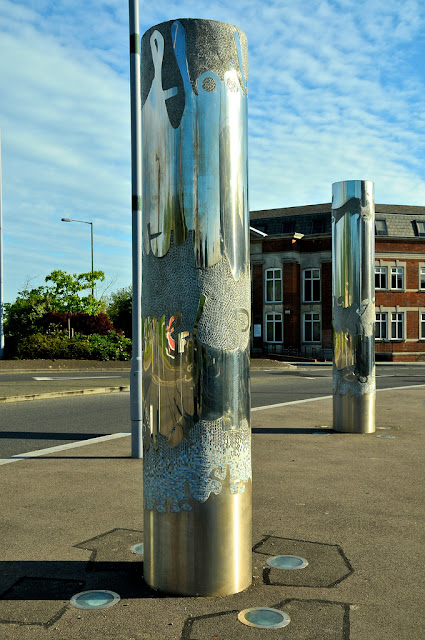 The photo above shows a couple of the abstract sculptures mounted on the pavement opposite the hideous fish sculpture - which I suspect nobody notices, as they are too busy wincing at the eye watering fish. They are there anyway, for whatever purpose they were installed.

It most definitely is the silly season in the local press. Many column inches were dedicated by the News Shopper to a story concerning a post box close to Belvedere railway station which some joker partly painted gold, in a parody of the campaign the Post Office had to officially paint gold a post box in every town that housed a British Olympic gold medal winner. The guy was caught red handed by local police in the early hours of the morning, complete with a paint brush and a can of gold Hammerite. As has been so often the case in the last couple of years, the comments made on the talk back for the story have been telling; the level of bad grace and bile exhibited by many of the commentators has become the norm for the News Shopper. They don’t seem to police or moderate comments left by readers, even though in a significant number of cases, the content has been offensive. I think it will be sooner, rather than later before something serious comes of it.

I don’t really watch much in the way of television drama; I seem to spend most of my time watching stuff such as the National Geographic, Military History and the Discovery Channels. I have never watched serial dramas such as soap operas – not through any degree of snobbism, they just don’t appeal to me. I understand that both Coronation Street and EastEnders have huge followings, though I would be personally hard pressed to tell you much about either show. It is interesting to see that EastEnders has a substantial local link in the person of actor Tony Discipline, who plays a character called Tyler Moon in the soap. He was accused of beating up a man in a West End nightclub, and the case went to court last week. The trial lasted less than a day, when the judge determined that the accuser was lying through his teeth, and that there was no case to answer. Tony Discipline was acquitted on all charges. I was surprised to discover that he actually lives in one of the town houses in Rutland Gate, just off Erith Road in Upper Belvedere. Not the kind of glamorous address one would assume a soap actor would choose as a base, but then, acting is really just another job. 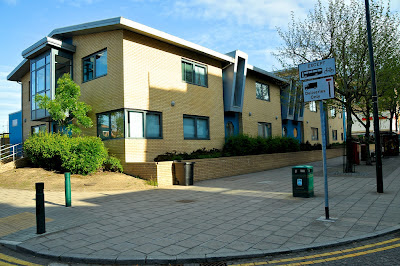 I don’t know if any local residents can recall that in the early to mid 90’s the scrap yard in Manor Road, Erith used to have a rather unusual mascot parked out at the front. It was a Ex Iraqi Republican Guard T-55 main battle tank. I did a bit of digging a few years back, and I managed to find out a bit about it. The company (now European Metal Recycling) were contracted by the Ministry of Defence to import, break and recycle tanks and other military equipment after the defeat of Saddam’s army in the first Gulf War. The company experimentally brought three or four (the precise number is uncertain, but it was very low) T-55 Russian produced main battle tanks over to explore the logistics of breaking them for their component metals. The story goes that all but one of them were cut up, but the process took far longer and was far more expensive than had been anticipated. For this reason the remaining T-55 – the one in almost mint condition (though minus ammunition and without firing mechanisms for the guns) was retained as a mascot for the company. I can recall that before I lived in Erith, I would occasionally see the T-55 when I drove past the yard. The thing became a bit of a minor local landmark for quite a few years. On one occasion it needed to be moved around the yard; one of the staff was an ex tank driver in the British Army – he was tasked with the job. What he did not know was that the controls for Warsaw Pact tanks were an exact mirror of those from NATO countries. He ended up driving the tank clean through the brick wall surrounding the yard, and across the road – it only stopped a couple of feet short of the industrial units on the corner of Frobisher Road. You used to be able to see the patch of fresh bricks which were used to repair the tank shaped hole, though nowadays these have faded and it is now invisible. The tank was none the worse for the accident, and later was used in several music videos, and also was the central vehicle in the movie “Tank Girl”. It has not been seen for several years now, and I have no idea what its’ eventual fate was. I wonder if anyone has a clue? Leave a comment below.
Pewty Acres uses BT Infinity 2 fibre optic broadband to connect to the internet; I have just had an upgrade to the service, and I am now getting a reliable 73Mb/second download speed, and a 19Mb/second upload speed. I can recall when, back in 2001 I was the first person to have broadband enabled, not only in my road, but the first on the Slade Green telephone exchange. The BT engineer spent all day physically connecting my house, and had to make two visits to the exchange before my connection was fully set up with what was then an astonishing 512 Kb / second download capacity. This was well over ten times what I was used to with my old U.S Robotics V52 modem, and at the time I was more than happy with it. Times have changed though; my smart TV hooks up to my wireless and plays streaming HD video content quite happily - something not even considered back in the day.

The video this week shows the arrival of the Olympic Torch at Erith Yacht Club a few weeks back; to be honest, it could do with some fairly aggressive editing, as it is far too long, but if you fast forward through it, you will get a good idea of what the event was like. After arriving from across the River Thames by RNLI lifeboat, the torch was then borne along Manor Road, and though Erith Town Centre, before making its' way to Hall Place in Bexley.