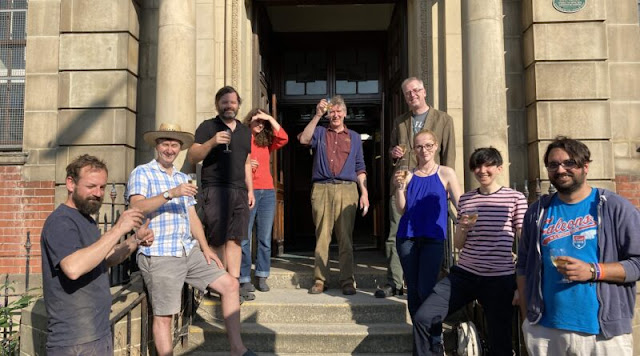 The second phase of the renovation work on the Old Carnegie Library in Walnut Tree Road, Erith has now got underway. In an article published in London News Online, the web based news outlet wrote:- "An arts and culture centre set in an old library is set for a £1 million renovation. The Exchange, in Erith used to be known as Carnegie Library until it was transformed into a community arts space 18 months ago. The renovations, which are anticipated to take place from September this year until February next, will restore the ground and first floors of the Old Library building to their former glory, centred around an events area for local concerts, exhibitions, markets and festivals. The new works will also make the full building accessible to all, with a lift to all three floors. The Old Library, which was built more than 100 years ago by local community makers, will be a permanent home to a series of textile, ceramic and printing workshops. Erith resident Sarah Batten, co-director of The Exchange, said: “At this very uncertain and challenging time for so many British towns, in which so many are fearful of losing their identity and sense of purpose, we are excited to be progressing with this next stage of works to the Old Library to give Erith something exciting to look forward to in the coming months and years. “The Exchange is building a new beating heart for Erith – one that all local people can get involved with – and that injects positive energy, skills and a genuine sense of pride and community into the area.” No prizes for anyone who spots the "Where's Wally?" in the photograph above! Email me at hugh.neal@gmail.com. 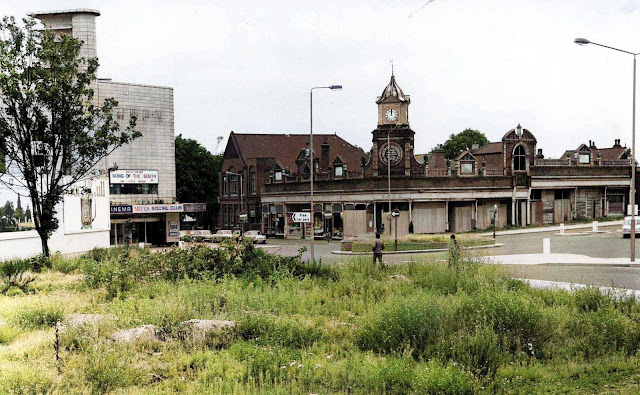 The photo above shows the old Co-Op building that used to be on the site of what is now Erith KFC. The photograph was taken back in 1974, from the location of what is now Sherwood House sheltered housing accommodation. The Co-Operative Society has strong roots in the Erith area. A co-operative shop was opened in Erith in 1868 by Sir William Anderson of Easton and Anderson engineering. The shop unfortunately soon failed, as it refused to give credit, and was patronised mainly by the emerging middle classes, for whom it was not intended.  1868 also saw a much more successful launch of the Royal Arsenal Co-Operative Society at Woolwich. By 1881 they had extended the delivery of bread and groceries into Erith. On the 30th March 1882, a co-op branch store, costing £1,225 was opened on the corner of Manor Road and what is now James Watt Way. A reading room was provided on the first floor by the society's education committee, and supplied newspapers and periodicals for public use. In 1887 this was extended to form a purpose built district library, with a budget of a whole £30 to purchase books. Over the years the trade increased with the surge in growth of the local population, to the point came where the building was not large enough, and new premises were constructed in 1893. It was not very long until this co-operative library fell into disuse, when the Andrew Carnegie sponsored public library in Walnut Tree Road opened in 1906. Records show that the co-operative library had some strange rules in respect of their employees. The first manager of the Manor Road based library was a Mr. James Hall, who had left school at the age of eleven. He was soon promoted to General Manager on the condition that he got married within three months of the appointment! He eventually got spliced four months after his appointment, but this was deemed to be near enough for his employers. Hall eventually rose to become General Manager of the RACS from 1902 until his retirement in 1918. 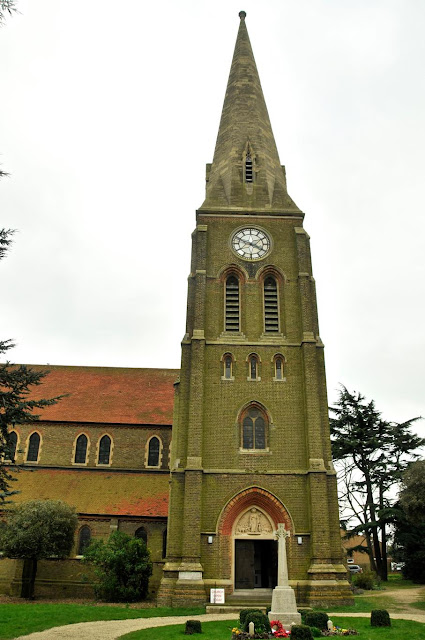 The photo above shows Christ Church Erith, which forms one of the most noticeable landmarks in the town. It is actually quite a modern construction – the cornerstone was laid back in 1872; the land the church is built on was donated by Colonel Wheatley – initially church services had been held in a temporary building made of corrugated iron. The consecration service took place on the 6th June 1874 by Archbishop Tait of Canterbury. The church is built mainly of brick, in the Early English style that many Victorian architects favoured. The building cost around £8,000 – a sizable fortune at the time. A few years later the interior of the church was “Beautified” with a series of frescoes being added; representations of the resurrection, Christ with Angels, four historic Bishops of Rochester, and scenes from English history. These painted wall panels make the church interior look Medieval – certainly far older than it actually is, and make the interior one of the most stunning of any church in the area. I would strongly recommend that you pay the place a visit – the place may look fairly unremarkable from the outside, but the interior is something else altogether. The church bell tower and spire was added forty years after the main building was completed; the first stone on the 13th of June 1914, and was completed and dedicated on the 5th June 1915. You can see a series of photographs of the interior of the historic church by clicking here. Work is currently being undertaken in the church lobby to install toilets, baby changing and disabled facilities to the historic local building. This improvement to the already impressive structure has been financed by The Friends of Christ Church Erith.

Now for the weekly local safety and security updates from Bexley Borough Neighbourhood Watch Association; firstly the report from Barnehurst ward:- "Between Friday 11th and Wednesday 16th September unknown persons have cut the wire fence that surrounds the driving range at Barnehurst Golf Course. Entry was then gained to the lobby of the driving range whereby a hole was found in the stud wall. One of the buggy's was found half in and half out of the hole. The roof to the buggy was severely damaged. Damage was also caused to the shutter. The CCTV cameras were found pointing towards the ceiling. In Hillingdon Road a small packet had been delivered and was left in the porch, the packet was found open and the contents missing. We have had an Incident of Fraud whereby the victim received a phone call from Microsoft. The victim was told his computer had been hacked. The victim was then asked to install software unaware of the scam. Following reports of drug dealing in Fairford Avenue the team carried out patrols to the area. On Monday 21/09/2020 Officers stopped and searched two males at the location after smelling a strong smell of cannabis. This area will continue to be monitored, If you see anyone acting suspiciously please let us know". Belvedere ward:-"Last week the team were able to speak with a male resident that had been shoplifting (stealing alcohol) and causing several issues in the supermarkets and shops around Nuxley Road for many weeks recently. After discussing the incidents with him at length, we are pleased to say that he is now being given assistance from both the team and from partner agencies. We have been informed of several groups of youths using pedal cycles and electric scooters around the upper Belvedere area – in particular around Albert Road and the recreation ground. Through patrols around this area the team have been making efforts to educate the young people on the laws around scooters and also cycling safety. We will continue to patrol this area as much as possible. The team arrested a male on suspicion of burglary and fraud by false representation. This was in relation to theft of mail from the flats on the Belvedere Park Estate and associated frauds. The suspect has been interviewed and released under investigation pending further enquiries". Bexleyheath ward:-"At Rye Close Bexleyheath – There was an attempted theft of motor vehicle. Suspects were seen trying to access the vehicle using some sort of scanning device, this was reported last night after midnight. A theft from motor vehicle had been reported on the Monday 21st at goals soccer centre Graham Road in the evening. Passenger window was smashed and personal items taken from within including ID documents At Rye Close Bexleyheath – There was an attempted theft of motor vehicle. Suspects were seen trying to access the vehicle using some sort of scanning device, this was reported last night after midnight. On the Saturday 19th October there was a report of a theft of motor vehicle that was stolen overnight from a en-bloc garage at Gravel Hill Close Bexleyheath. On the Thursday 17th September there was a report made of a hand bag being stolen from the victim whilst the bag was in the buggy, suspect grabbed the bag and then run off. This had taken place outside ASDA's in the morning". Crayford ward - no report this week. Erith ward - no report this week. Northumberland Heath ward - no report this week. Slade Green and Northend ward:- "A padlock was forced off a garage in Clark Close overnight on Sunday into Monday 20/21 September. It is unclear at this time if anything has been taken. Please check your locks if you have any sheds or garages. A wallet, a purse, money and 2 phones are some of the items taken from 4 separate vehicle break ins in the past week at various locations across our ward. All took place overnight. Again, please leave nothing in your vehicles when locking them up. PC's Mark and James came across 3 males sitting in 3 vehicles parked in Dale View last Saturday afternoon. All 3 were searched and one male was arrested for Possession With Intent to Supply after a large amount of drugs were found. This investigation is ongoing. The team took part in a multi-agency operation on the Darenth Industrial estate on Wednesday 23/09/2020. No arrests were made and no enforcement needed at any of the premises visited". Thamesmead East ward:- "Troon Close Thurs 17/9/20 between 00:10 am - 00:15 am victim reports vehicle window smashed by suspect/s unknown. Hartslock Drive Sun 20/9/20 19:55 - 20:01 pm Victim reports window to vehicle smashed with a brick and gear knob removed by suspect/s unknown. Templar Drive Mon 21/9/20 10 pm – Tues 22/9/20 8:20 am victim reports vehicle stolen by suspect/s unknown. Victim is still in possession of the keys. Yarnton Way Wed 23/9/20 13:01 - 13:30 pm Victim reports pedal cycle stolen from outside a shop by suspect/s unknown. CCTV covered the incident 2 males seen cutting the chain and riding off. The suspects carried out the same crime in Sidcup again with CCTV coverage. One male was arrested pending investigation". West Heath ward:- "A neighbour has reported seeing two males hanging around in the road in the early hours of Sunday 20th September at approximately 2 and 2 30 am in the morning. They observed the two men chatting for a while after which one, the shorter one left the road in the direction of the Pantiles, The other taller one remained in the road and was seen walking up and down selected drives trying the handles on the car doors, he too left the road later in the direction of the Pantiles. The resident did observe that the second male was walking unsteadily about the area".

The end video this week features local band The Pretty Things. Members of The Pretty Things came from Dartford, Sidcup and Slade Green; whilst they were initially described as a free form rhythm and blues band, they were later described as the very first Punk band. he Pretty Things may not have shown up on the charts, but their cult proved to be influential: it's been said Pete Townshend was influenced by The Pretty Things pioneering rock opera "S.F. Sorrow" to write Tommy for the Who, and David Bowie covered both "Rosalyn" and "Don't Bring Me Down" for his 1973 album Pin Ups. The Pretty Things final album, the acoustic  ‘Bare As Bone, Bright As Blood' has just been released. Below is a live performance of a track from the album, called "Come into my Kitchen". Blues from the Dartford delta.
Posted by Hugh at 2:45 pm