I took the photo above on Wednesday afternoon; it shows the progress on the apartment block that is currently being constructed on the site of the former Belvedere Police Station, on the corner of Nuxley Road and Woolwich Road. Despite Covid-19 restrictions, work on site now seems to be progressing, and I do not think it will be too long before the roof will be ready to install. Remarkably for such a restricted site, the disruption to local residents and businesses has been fairly minimal. I do wonder, when the residential block is completed, and the residents move in, how they will cope with car parking? The site will have minimal parking facilities, and parking in either Nuxley Road or Woolwich Road will be impossible. I do sense a potential opportunity for the operators of The Priory Social Club, directly opposite the new development. They have a large and usually fairly empty car park in front of the main club house building; it would not at all surprise me if they offered car parking spaces to the residents of the new apartment block for a suitable monthly fee. It would seem to me to be a "win / win" for both parties - after all, the new residents would gain a place to park their vehicles, and the social club would get a new revenue stream. What do you think? Email me at hugh.neal@gmail.com.

As mentioned in last week's update, work on phase two of the refurbishment work on the former Carnegie Library in Walnut Tree Road, Erith is now well under way. This is part of a joint project between Bexley Council and The Exchange - the charitable community benefit society which operates the historic building. Whilst undertaking some research earlier this week, I discovered something about Andrew Carnegie - the billionaire philanthropist who gifted nearly 2,500 libraries to communities around the world in the late Victorian and early Edwardian eras.  Apart from his charitable works, Andrew Carnegie had another legacy, that very few people are aware of. In Victorian times, a number of prominent authors on both sides of the Atlantic Ocean - including Sir Arthur Conan Doyle, Mark Twain and Charles Darwin were pressing for reform of the spelling system used in the English language. They complained that the spelling was inefficient, confusing and inconsistent, and that action needed to be taken to simplify things for the benefit of all. Despite the number of illustrious and famous people behind the campaign, nothing really became of it for many years. Eventually spelling change groups sprang up in both the USA and United Kingdom, the most prominent of these was The Spelling Reform Association, which was formed with branches on both the USA in 1876, and in the UK three years later. In 1906, Andrew Carnegie donated the sum of $250,000 to the association - a huge sum equivalent to around $30 million today. The Spelling Reform Association campaign gained a lot of traction in the USA, and many British English words were simplified indeed, then American president Theodore Roosevelt was so taken with these easier spellings that he ordered the US government printing office to adopt the simplified spellings in all federal documents. For some reason the same thing did not happen in the UK, where spelling stayed as it had been for a couple of centuries. This is the reason why US and British English have many words which mean the same thing, but are spelled differently from each other. The main sponsor of this was the same person who funded the Old Library in Erith. A small world indeed. 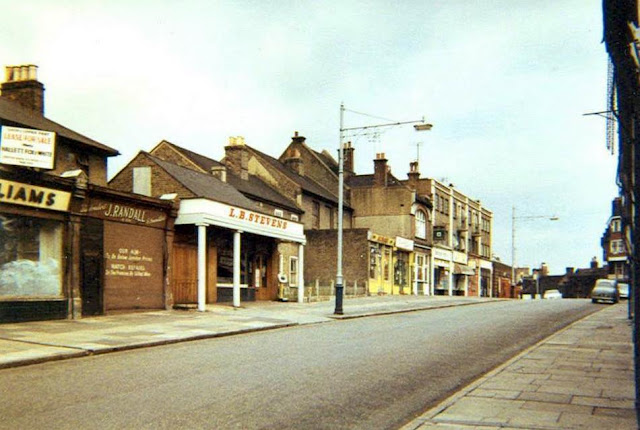 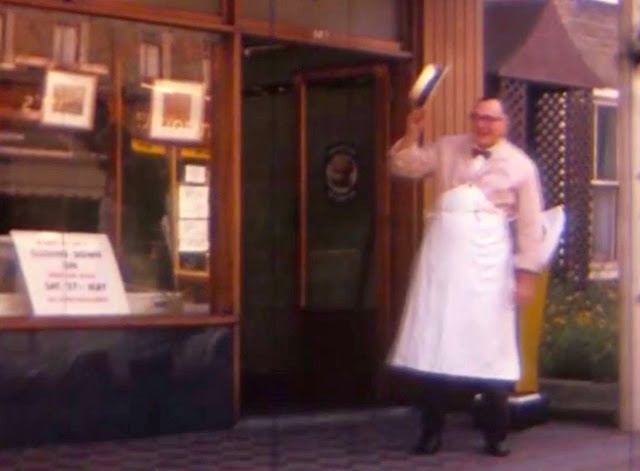 The upper photo was taken by Pier Road based professional photographer George Gilbert early in the morning of Sunday the 17th of July 1966. It shows what Erith High Street looked like fifty four years ago, including L.B Stevens the Butcher. The only buildings still in existence in the photo are The Cross Keys, which can just be seen to the extreme right of the photograph. Slightly to the left of it you can just see Erith Post Office, which is still open as well. It was only a very short time later that the whole of the centre of Erith was demolished to make way for a horrendous brutalist concrete shopping centre, which was universally loathed (and as a child, my main recollection of which was a strong smell of stale wee and Jeyes Fluid). I don't know a single person old enough to recall the old town centre who would not have it back if it was possible. The lower photo shows the last day of trade for L.B Stevens - Master Butcher, photographed on Saturday the 27th May 1967, just before the shop was shut for good and demolished. By the look of things, the immaculate shop, with Len Stevens in his bow tie, spotless apron and straw boater hat was a real credit to the area. If the redevelopment vandals had not come in and demolished things, I do wonder if Stevens the Butcher would still be running today? With the increase in popularity of traditional suppliers, Erith could have become a haven for foodies. I have heard it said that if the original, historic Erith town centre had been preserved, then Erith could now be Whitstable on the Thames. How things might have been different if wiser heads had been in control?

On Friday morning, a press release was published by The Environment Agency; it has special relevance to local residents. The press release reads:- "Fourteen sites raided on the Darent Industrial estate in Multi-Agency day of action. Waste sites on the Darent Industrial Estate in Erith got a surprise early morning visit from Environment Agency officers working with the Met Police, HSE, London Borough Of Bexley, British Transport Police, BT Openreach, London Fire Brigade and the Joint Unit For Waste Crime. The raid is part of a number of multi-agency days of action targeting poor performing businesses in the Kent and South London area. The raids led to the discovery of a suspected stolen vehicle and recovering stolen metal and cables. Officers also found someone illegally living on a site, which raised concerns about their safety due to fire risk. The Environment Agency uncovered a number of incidents of poor compliance with waste permits. Investigations will now follow and appropriate action will be taken to improve compliance and the state of the sites, which could include enforcement action. Everyone involved in the raid made sure the raid was conducted with social distancing rules in place with correct PPE to make sure everyone involved was safe. Matt Higginson, Environment Manager for the Environment Agency, said: “It’s our job to protect people and nature even in these uncertain times, which is why our regulatory and enforcement work continues while we adhere to the government’s guidelines around coronavirus. “This should serve as a warning to those who would flout the law that we and our partners are still fighting to put a stop to waste crime and we won’t hesitate to take action”. To help avoid your waste ending up at an illegal waste site, we encourage you to ask for your waste collector’s waste carrier’s registration number and ask to see their waste transfer note. Joint investigations will continue with the Environment Agency and if convicted as a result of legal action, those responsible could face extensive fines and even prison sentences. Anyone who suspects illegal waste activity is reminded to report it to our 24-hour hotline by calling 0800 80 70 60, or anonymously contacting Crimestoppers on 0800 555 111. You can check your waste collectors waste carriers registration at https://environment.data.gov.uk/public-register/view/search-waste-carriers-brokers or call 03708 506 506. Earlier this year the Environment Agency and partners launched the Joint Unit for Waste Crime, aiming to stop serious and organised crime in the UK Waste Industry. You can find out more about the initiative on our website." This is great news; it has long been rumoured that there were serious problems with some of the companies based on the Darenth Industrial Estate, and this would seem to confirm them. 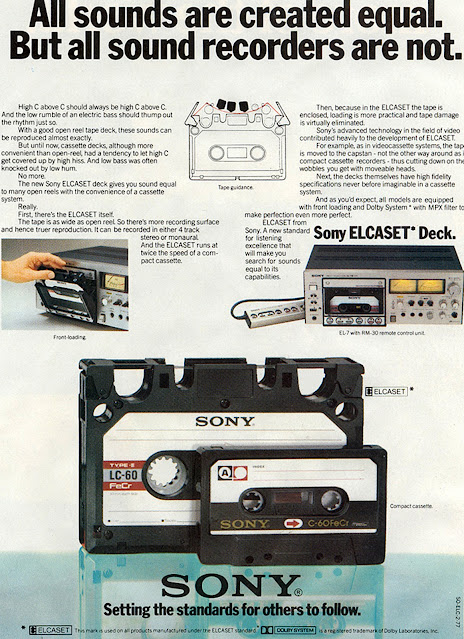 It seems highly likely that the Cineworld cinema in Bexleyheath will be closing for good very soon, as a direct result of the Covid-19 pandemic. Britain’s biggest cinema chain, Cineworld, is to shut all its UK venues, putting up to 5,500 jobs at risk, after the latest James Bond movie was delayed into next year. Cineworld, which owns the Regal cinema and Picturehouse chains, is understood to be preparing to announce plans to close all its theatres in the UK as soon as this Monday, affecting nearly 130 sites. It is also closing its 536 Regal cinemas in the US. This will be a blow both to the staff working in the Bexleyheath cinema, and also to those who have enjoyed seeing films there in the past. Cineworld’s theatres reopened in July following the coronavirus lockdown, but it flagged doubts over its ability to survive a second lockdown in September when it reported a £1.3bn loss for the first half of the year. Hopefully a rescue deal for the chain can be put in place. Another victim of the terrible pandemic. Do you work at Bexleyheath Cineworld? Are you affected by the potential closure? Email me at hugh.neal@gmail.com.

The end video this week is very short - regular readers may recall that two weeks ago, I featured a story and a rather dramatic photograph of a fire that destroyed two Ford Transit vans which were parked outside of Electricity House in Erith. I now have come across some video footage of the incident, with the Fire Brigade rapidly extinguishing the blaze. Please send any comments to hugh.neal@gmail.com.
Posted by Hugh at 2:00 pm