I took the rather dramatic photo above on Monday evening. It shows a Thames Water drain cleaning truck and its operators located at the junction of Wheatley Terrace Road, James Watt Way and Appold Street in Erith. The location is somewhat significant; it marks a key site for the area's drainage system, and is adjacent to a key Thames Water pumping station. Drain cleaning teams and their vehicles are seen on this site on an almost weekly basis - the reason for this is that the main waste drain from Morrison's supermarket passes under the car park an into the main drain at this point. The drain gets clogged and blocked so frequently that I wonder if Thames Water have a clearance team on permanent assignment to the site? The area behind the truck in the photo above is occupied by Abbey Car Breakers, and there is also a small compound that is currently used as a depot by the RAC - it is where their rescue vans are based when they are not on the road, helping motorists with broken down vehicles. The site, which has riverside access currently has a covenant on the land, which prohibits any construction which would prevent access to the banks of the River Thames. The council are debating removing this restriction to allow the site to be redeveloped for housing. The long term plan appears to be that the Eastern end of Erith will gradually be changed from predominantly light industrial and recycling use into residential accommodation. As with many of these plans, they are subject to change, and even cancellation. If you have any information that you wish to share with me, then Email me in complete confidence to hugh.neal@gmail.com. 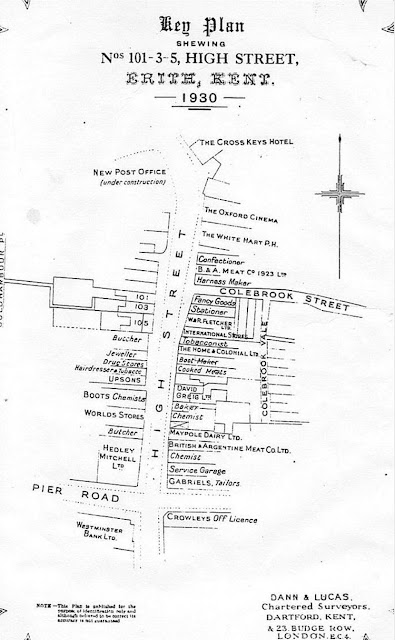 The image above - click on it for a larger version - shows the main shops and facilities that existed in Erith High Street back in 1930. What strikes me is the quality and diversity of retail outlets in the town back then - it must have been a real treat to go shopping in Erith eighty five years ago. If you have any historical memories of Erith - or indeed any photos from the past that you would like to see me feature - with of course full credit to yourself should you so wish, then please get in contact with me. 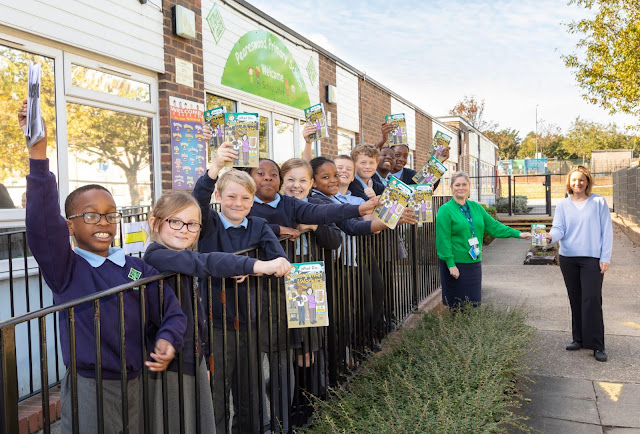 The photo above - click on it for a larger view, shows children at Peareswood Primary School in Erith. They have been taking part in an education programme that has been sponsored by Wates and Orbit Housing association. An announcement regarding the programme was released on Friday, which reads as follows:- "Primary school pupils in Bexley are the first to receive a unique new children’s book designed to inspire them to work in the construction industry after the launch of the book at Peareswood Primary School on 7 October. Key Stage 2 pupils will receive a free copy of What Do … Construction Workers Do? By Emma Juhasz. The new book aims to increase diversity in the sector by supporting learning and providing a more accurate illustration of the wide-ranging jobs available in construction. What Do … Construction Workers Do? Was developed in response to the idea ‘you can’t be what you can’t see’. Children can use the book to learn how construction workers build structures, as well as the different kind of jobs available. It includes characters such as Ella, an Architect and Yasmin, a Quantity Surveyor who tell children about what their roles consist of and the qualifications needed. It comes after research found that by the age of seven, children already demonstrate limitations on their aspirations for future careers, while many only consider jobs that they are familiar with through friends and family members. Wates Residential is also the first construction company to work with the Children’s University, which encourages, tracks and celebrates learning that takes place beyond the classroom. This unique partnership means children will receive a ‘Passport to Learning’ in which they can collect two stamps by completing the four interactive activities inside the book. In total, the national developer will present 5,000 books to Key Stage 2 pupils at 11 schools across London and the south over the next 7 days. Leo, a pupil at from Peareswood Primary School who received a copy of the book on Wednesday, commented: “It is inspiring for me as a kid to see what I can be when I grow up. One day I might even be able to build my own house.” Azeeza, a pupil at Peareswood Primary School, also commented. She said: “I really liked the book because it will inspire children like me all around the world to be what they want to be when they grow up. I think construction workers work really hard and I want to be a hard working person when I grow up.” The construction industry is currently facing a skills shortage, and figures from The Chartered Institute of Building (CIOB) highlight that the industry will need to find 160,000 new recruits by 2023 to keep up with demand. While these children may need to wait a few more years before they can join the career ladder, it is hoped that this initiative will attract a more diverse group of young people to consider their future in construction. Wates Residential and Orbit have embarked on the regeneration the Park East site, which neighbours Peareswood School, where they will deliver 320 new homes, of which 80 per cent will for affordable rent and shared ownership to ensure a mixed, aspirational and sustainable community for local residents. The remaining 20%, which totals 64 homes, will be for open market sale and can be viewed on the sales website at https://www.orbithomes.org.uk/park-east/. This donation of book forms part of Wates Residential’s ambition to deliver a borough-wide legacy as part of their presence in the borough. This includes a commitment to boost the local economy by entering into contracts valued at c.£10,000,000 with local small and medium-sized businesses. Kate Ives, Development Director at Wates Residential, said: “Children’s potentials are being limited from a young age because they can’t be what they can’t see. At Wates Residential, we are passionate about inspiring children from all backgrounds and showing that the sector is open to all. What Do… Construction Workers Do? demonstrates the diversity of jobs and people in our workplaces. The author – Emma Juhasz – and the Children’s University have done a wonderful job at helping us to bring our sector to life and I hope many more young people will be encouraged to see construction as a viable career option in the future.” Emma Juhasz, author of What Do…Construction Workers Do?, commented: “I loved writing What Do Construction Workers Do? It became clear to me, very quickly, that the construction industry was like a sweet jar of opportunity. It has so many different jobs and caters for a huge variety of skills. I started the series of books, What Do..Do? as I wanted to help young children get a better idea of how their talents and interests could be translated into jobs in their futures. It is easy to see how many of them could end up working in construction. Wates has been very supportive throughout this project and are inspiringly invested in children and their futures. I hope many children will find the building blocks they need, in the book, and join them one day.” Fascinating stuff, and certainly a lot more informative that when I was at primary school. What do you think? Email me at hugh.neal@gmail.com. 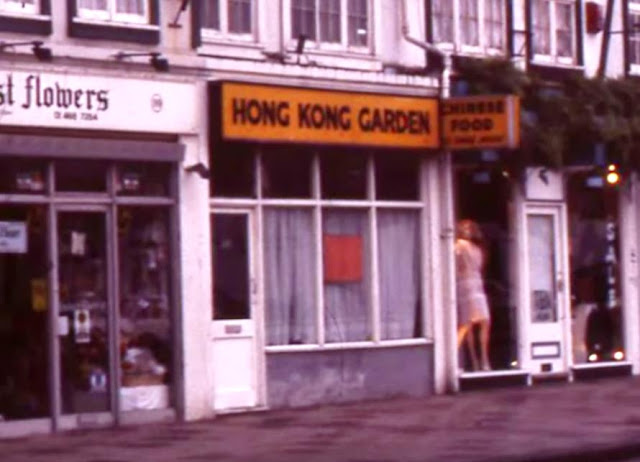 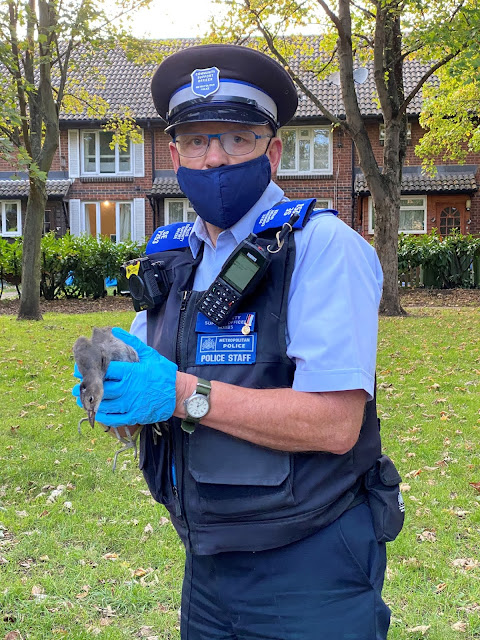 Thamesmead East ward:- "No Burglaries this week. Motor Vehicle Crime - Overton Road Thurs 1/10/20 1:20 am – 1:40 am victim states suspect removed a work jacket with keys inside the pockets. Unknown how suspect got into the vehicle. Northwood Place Fri 2/10/20 1:15 am: - 1:20 am victim states 2 unknown suspects have entered the vehicle and removed two bags containing tools and a sub speaker. Wolvercote Road Sat 3/10/20 11:21am – 11:36 am HERMES delivery driver has had two parcels removed from van by suspects unknown. Manor Close Tues 6/10/20 9pm - 11:50pm suspect/s unknown have stolen vehicle from victim’s driveway. Broken glass found at the location. Good News Abandoned Vehicles which attracted ASB in Dexter House car park, have been removed after partnership working with Peabody Housing. PCSO Hobbs found a distressed bird on the overpass in Crossways. The bird was captured by PCSO Hobbs and returned to the canal". West Heath ward:- "There are no reported burglaries from Wednesday 30/09/20 to Wednesday 7/10/20. There is one reported theft of motor vehicle for the same period. On Friday 2nd October 20 at 1620 hours, a white Ford Sierra Cosworth index F647 TEV was stolen from Langley Road".
The end video this week is a short documentary on the history of Thamesmead. It is well worth a watch, and forms part of a series of documentaries about the local area. I will be featuring others in the series in the weeks to come. Let me know what you think by Emailing me at hugh.neal@gmail.com.
Posted by Hugh at 1:15 pm