Word reaches me from an extremely reliable source that the Running Horses pub, opposite Erith Riverside Gardens may well soon have a new owner. The rumour I have heard is that the place is about to change hands. Under previous ownership back in the 1980’s, the Running Horses Carvery was incredibly popular – to book on a Sunday you usually had to make a reservation a couple of weeks in advance. The food was well cooked and plentiful, the place was packed and the service was great. The excellent view over the river Thames from the upper floors windows only added to the whole experience. I can recall being taken there with my sister by my parents on many occasions. It was always a very pleasant way to spend a Sunday afternoon. Unfortunately things have gone downhill since. The Running Horses used to be a “treat” destination, but nowadays it seems to be a disappointment. The current owners spent a lot of money on the place a few years ago, but I don’t think they have recouped it. Walking past the place early on a Sunday afternoon, I rarely see more than a couple of cars in the car park at the back, or in the Riverside Gardens parking spaces at the front of the pub. This contrasts with the eighties, when a driver would be hard pressed to find a space after midday. When I last visited the Running Horses a couple of years ago, the only real ale they had on tap was Young’s Bitter (one of my favourite bog standard bitters) but it was sour and off. When I took back the pint the barman denied it was off, and when I showed him my CAMRA membership card, he offered me a pint of Carlsberg lager in replacement. I am pretty sure he had no idea how insulting that was to a real ale enthusiast, so I got a refund and went home. This is no kind of customer service. I think a change of management company or brewery might be the best way forward to keep the place going – I have worries that it might get closed and converted into apartments, or worse still, demolished to make way for yet more faceless new flats. If the rumour that I have heard is indeed true, the pub could be getting not only new ownership, but also some much needed and overdue investment. If you have any information about the situation with the Running Horses, please Email me at hugh.neal@gmail.com in confidence. 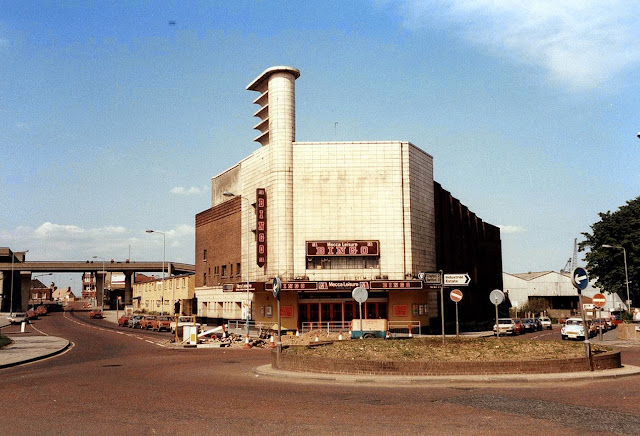 Following my publication of a map of central Erith from back in 1930 last week, regular reader and occasional contributor Bob shared his reminiscences for publication. Bob writes:- "I thought I would give you my memories of the Old Town.  I didn’t work there that long but I certainly enjoyed the place.  Before I worked there at the Midland Bank,  Erith wasn’t the most frequented shopping place as it was two buses from Bedonwell Road, where we lived rather than a single  401 or 486 bus journey to Bexleyheath.  I did go to Mitchell’s with my grandmother and was fascinated by the aerial cash system that took your money and you had wait for your change on its return. I have very fond memories of the Old Erith Town. I worked in the High Street from 1961 until 1965 and I am pleased that I never saw it’s destruction starting in 1966. My journey to work was by a 122a bus and would walk down Pier Road and then across to the High Street.  I just wish I could remember every shop down Pier Road and in what order. It would be nice if there was similar map available for the 1960’s like the 1930’s one previously posted. I would always walk down the left side passing Owen’s Ironmongers viewing all their wares out on the pavement, the next store was the LEB and then a few newer shops before I would cross over at Cross Street with Blundell’s on the corner with Charles Weedon, the solicitors. Plenty of shops down on the right side. These included Barclays Bank, SEGAS, a men’s clothing shop, Gilbert’s the photographers, Erith Observer, Diploma’s Ice Cream Parlour, Mac Fisheries, V V Carriers bakers, The Market greengrocers, Woolworth’s, Randall’s stationary, Barden’s electrical, a tobacconist and the Westminster Bank on the corner. I think there was a Dewhurst’s before the multiple department shops of Hedley Mitchell’s.  Mitchell’s had closed when I started in 1961. Turning right into the High Street was an empty shop in 1961 but became Llewelyn’s, a wood and DIY shop. There was an optician next door and a Fine Fare supermarket with the Panayi brother’s barbers and then Tip Top Bakeries on the corner of Queen Street. Across Queen Street were other shops including a Co-op furniture store and Selfe’s a jewellers. Crossing over the other side of the High Street with the Odeon Cinema on the corner, there was a DER TV rental shop, a launderette, a Men’s clothes shop, then a single property in 1961 of the Midland Bank.  This latter became a double property in about 1964. Next door was an off licence that became a carpet shop. Back across the bottom end of Pier Road was Montague Burton with its dance studio behind. Next was Howells and Griffiths a chemist. There was a shop that just sold foam for upholstery.  I think the next shop was what we would now call a delicatessen.. It was here that I would buy my freshly made lunchtime sandwiches which were slowly made and precisely wrapped in greaseproof paper. The proprietor was of European origin (German?) and of few words. I cannot remember other shops along here apart from a motor cycle/cycle shop with a red painted front and Derrett & Dormans before the White Hart Pub.  Across the road was the Post Office that was my after hours job to post the daily receipts etc.  Walking back was the Locomotive Inn, a house with a garden that hadn’t been converted into a shop, Alibars run by Mr Woods a friend of my future wife’s family, Stevens the butchers, Crown wallpapers, Williams grocers, Boots the Chemist.  There were many other shops not mentioned and some mentioned might be in the wrong order but it was 55 years ago that to moved away to Lewisham.  Two years later I was back working in the area (Atlas) but I couldn’t face seeing the changes in the town. As I said at the beginning I have many fond memories of the Old Town and had some celebrations in The Prince of Wales and the Running Horses after working hours.  Summer lunchtimes I would take my sandwich to the Erith Waterfront, study the tides times from the display and watch passing ships. Happy days to be sure."