I took the photos above during the week; they show Erith Riverside Gardens, which many local residents feel is the jewel of Erith, and are very protective of. The gardens are the only place in the whole of the London Borough of Bexley where one has access to the River Thames. The views out over the river can be absolutely spectacular. There is a support group for the gardens called FORGE, which stands for Friends Of Riverside Gardens Erith. Bexley Council have plans to improve the Riverside Gardens, which include remodelling the footpaths and providing better children's play facilities, along with adding a tree lined boulevard and generally making the place more attractive, which can only be a good thing.
Following my article last week on the Running Horses pub, opposite the Erith Riverside Gardens, I have now received confirmation that the venue has indeed changed ownership. My source informs me that it is now being run by an experienced landlord, whose former career was as a fire fighter in Poland! I wish him and his team success in turning around the pub and restaurant, which was very popular in the 80's and 90's, but in recent years has definitely been in the doldrums. I hope to pay the Running Horses a visit soon. 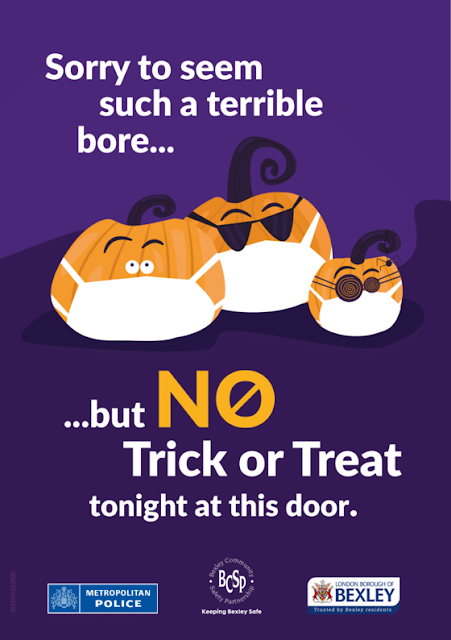 The forthcoming Halloween seems to be taking over as the main winter festival from Guy Fawkes Night. Halloween was originally created in pretty much its’ current form by 18th century Irish people, the word is a corruption of All Hallow’s Eve. Irish immigrants to America took the tradition there, and it was exported back across the Atlantic in the early 1980’s. Although Halloween was celebrated before this time, it was a far lower key and less involved affair. I am convinced that the increase in popularity of the Americanised version of the festival can at least partly be laid at the feet of Stephen Spielberg and his movie “ET – The Extra Terrestrial”. The film carries strong Halloween themes such as dressing up and “Trick or Treating” which prior to the opening of the film had been relatively uncommon in the UK. The massive popularity of the film exposed may children of the time to take on the American aspects of the Halloween festival; many of those children now have children of their own, and the festival thus now has an amplified resonance not previously seen. Personally I am not struck with the whole thing, which basically encourages small children to demand goods with menaces, but I am probably in a minority. The current lockdown situation may alter things this year - time will tell. The picture above this article shows the official Bexley Council / Metropolitan Police poster - you can click on it to get a larger version, then print it out and put it on your front door, or in a front window if you would rather not have trick or treaters knocking on your door. 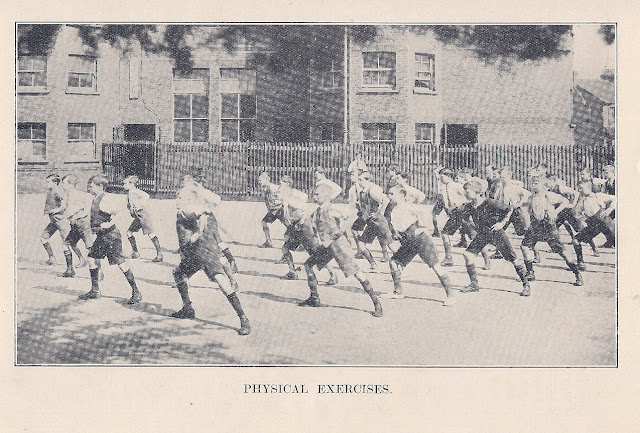 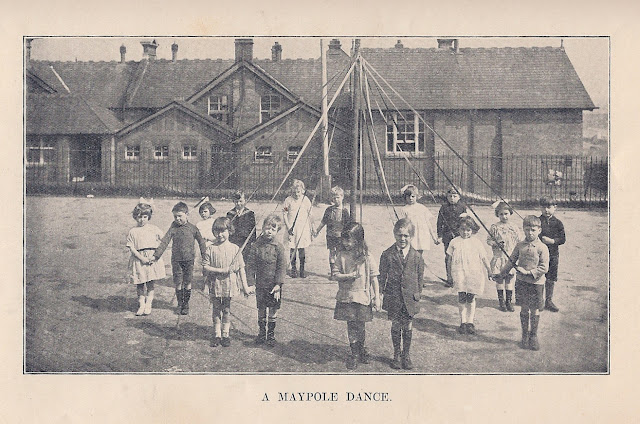 Quite a lot of new historical content this week, thanks to regular reader and occasional contributor Jeff, who has sent me a number of scans of a pamphlet originally produced for Education Week, June 22nd - 27th, 1925 by the Erith Education Committee (63 pages of text and pictures, plus adverts). Most is a description of provision of school provision and services in Erith. I will be publishing some pictures from the booklet over the next couple of weeks, in addition to the two above - click on either to see a larger version; coincidentally, I have also been sent a fascinating original pamphlet which lists all of the new books purchased by Erith Library back in 1949 - which I will also be featuring in the future - thanks to regular reader Christine for sending the historic booklet to me - much appreciated!

The following article was originally published back in 1925 in the Kentish Times - it was written by "Tumbler" Bell, the pioneering sportsman and union activist of late Victorian times who became a chronicler of old Erith in the pages of the then local newspaper. He wrote:- "Prior to the establishment of Messrs Easton and Anderson’s Engineering Works on the river bank at the bottom of what is now known as Manor-road, Erith, what was known as the Round House stood on the site.  A short distance away was Anchor Bay Farm, occupied by old Mr and Mrs Harry Graham, who saw the rise, decline and passing of both the engineering works and Messrs J R White and Co’s brickfields. They lived to a ripe old age, deservedly respected by all who knew them. To provide housing accommodation for the workmen, the houses in Appold-street, Wheatley-terrace, James Watt-place, and Rumford-place were built, and owned by the proprietors of the engineering works.  Houses were also built on one side of Manor-road, including the Royal Alfred public-house.  After sundown the locality was very dark, the exception being the well-lighted Royal Alfred, consequently the spot for congregation was the “New Light”, and by that name the house was generally known. The youths of the neighbourhood used to meet outside this house to discuss Rugby football, quoits, running, etc. There were English, Irish, Scotch, and Welsh lads.  Many could play fifes, whistles, etc.  A fife and drum band was formed; practice was allowed in the “Shant” (a long, narrow wood building, in which Easton and Anderson’s workmen took meals).  When proficient, the band paraded the streets, and a good show it made. All went well till the day it was discovered that the side drummer’s mother had converted the drum into a cinder sieve. The band broke up as a consequence. The “New Light” was used by workmen from both the works and the brickfields.  Lively arguments took place as to who could run the faster, which usually ended with the men taking off coats, waistcoats, and boots, toeing a line in the centre of the road, and racing each other along the road, round the houses, or round the backs in the brickfield.  That soon started the running craze, and young brickmakers and foundry workers were soon finding quiet spots for practising to prepare for racing each other at a given distance. When talking to admirers or critics some of the runners boasted of remarkable running feats done.  One evening one of them visited the “New Light”.  After drinking a quantity of liquor, he began to boast, and got so speedy that those present deliberately doubted his statements. “How far is it from the ‘Light’, up Manor-road, to Beadle’s Bridge, round Crescent-road, to the bridge at Whittingham’s shop, and back to the ‘Light’, and how long would it take you to do it?”  He told them.  Challenged, he took off coat, waistcoat, and boots, and toed the line in the road. Watch in hand, the time-keeper and starter got him off, and immediately stopped the watch.  All went back into the “pub”, to wait.  After a time the runner stumbled into the bar, panting heavily. The judge showed him the watch, and said, “You’ve done it in no time.”  “If I hadn’t fallen down twice, I’d have done it much quicker,” said the runner. Amusements would be arranged to take place on the same day as major events.  A farmer’s four-wheeled waggon was stood opposite the “pub”, to be used as a platform for singing contests, bobbing for apples, eating treacled rolls, etc.  A well-greased pole with a leg of mutton tied at the top was erected for a climbing competition.  Running races and other items took place.  On these occasions Don Andrews (a local comic singer) would climb into the lamp frame at the top of the lamp standard nearby, and recite the words of a ditty, and finish each verse with “Sing, brethren, sing,” and the assembled crowd would join “Don” and sing wholeheartedly." 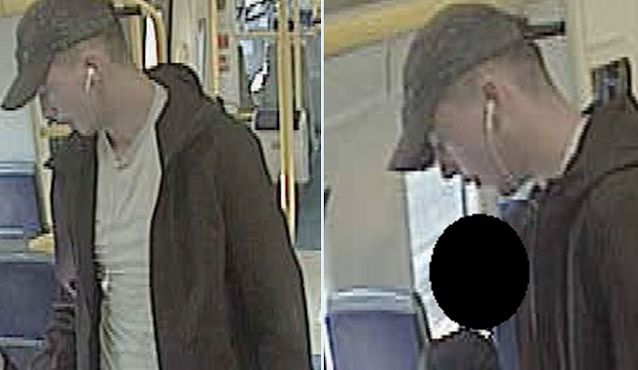 Police want to question a man after he robbed someone of their mobile phone by using an imitation hand gun. His likeness was caught on CCTV, which you can see above. The incident happened on a train between Dartford and Slade Green around 3:11pm on 29th September. The suspect got off the train at Slade Green. Please contact British transport Police on 0800 405040, Ref 420 of 29/09/20 if you have any more information.

The end video this week is courtesy of Erith's Carnegie Ensemble - the house band of The Exchange, based in the Andrew Carnegie gifted library in Walnut Tree Road, that is currently undergoing phase two of its restoration. You can read more about the project by clicking here. The Carnegie Ensemble can be seen playing Percy Hilder Miles Cello Quartet (1906) - Finale. All was done via Zoom and edited together. Do give it a watch, and send comments to hugh.neal@gmail.com.