I took the photo above yesterday afternoon; the rather moody shot shows the Western end of Erith Road in Upper Belvedere, at the junction of Picardy Road, Nuxley Road and Woolwich Road. The spire and body of All Saints Belvedere can be seen on the left of the picture. The ongoing building work to create an apartment block on the site of the old Belvedere Police Station can also be seen.

Regular reader and occasional contributor Colin sent me a couple of messages earlier in the week; his observations made for thought provoking reading. Colin has given me permission to reprint his thoughts in order to share them with a wider audience. Colin writes:- "The London Borough of Bexley touches the Thames at the former Golf Club in Lytham Close and perhaps Cory incinerator in Norman Rd.  I don't know about the footpath through Thamesmead Local Nature Reserve or the one alongside the Eastern side of of Crossness Sewage Treatment Works. There are then  numerous points of access as far as Linton Mead, but Linton Mead school IS in Greenwich. All fairly trivial but the arbitrary borough boundaries isolate Thamesmead Bexley residents  from the adjacent  Greenwich Waste Recycling Centre (tip) in Nathan Way which results in extra polluting car trips to Bexley tip in Thames Road using already overcrowded roads. The annoying thing is that Bexley plays a tit for tat war with Greenwich to ban Greenwich residents from  bexley Thames Road  tip. although no rational Greenwich resident would chose to drive to Thames Road.  What is infuriating is that a simple cross borough agreement to take each others waste would solve the problem and contribute to reducing fly tipping of "Bexley" waste in "Greenwich"  borough.  As far as I can see fly tipped Waste has to be regularly  removed in both filthy  boroughs  by a  third party - Peabody Trust. Greenwich WILL take "Bexley" waste in Nathan way tip on payment of £10 although this is not possible at the moment  because the debit card "machine " is "not working"  The boundary commission reviewed the borough boundaries The report includes maps of the boroughs - Click here to download a PDF copy of the report. One significant change since the report was published  is is that Thamesmead Town Residents Association has been replaced by Peabody Housing Trust who are presumably funding the removal of widespread  fly tipped waste from the increase in land values of the property they inherited. Obviously this will not last forever". What do you think? Email me at hugh.neal@gmail.com. 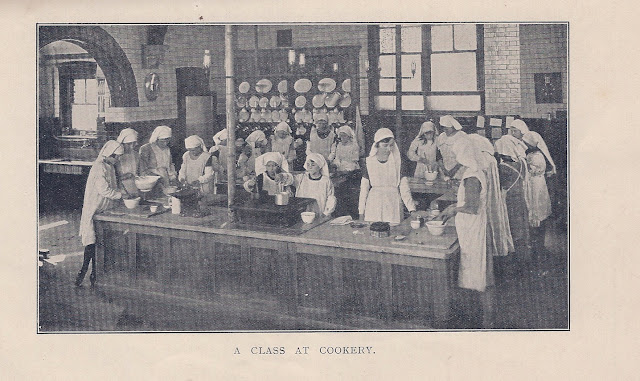 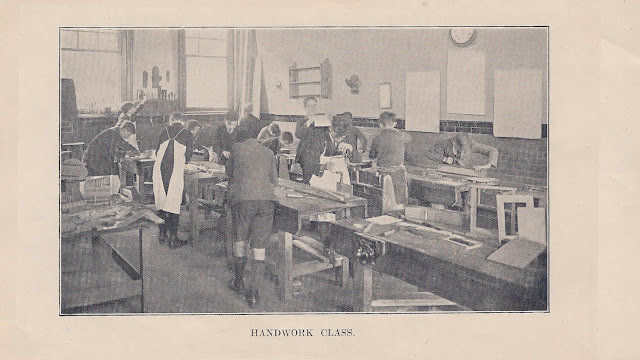 Thanks again to Jeff for sending me more historic photographs of the local area; the two shots above - click on either for a larger version - show images from a  pamphlet originally produced for Education Week, June 22nd - 27th, 1925 by the Erith Education Committee (63 pages of text and pictures, plus adverts). Most is a description of provision of school provision and services in Erith. The pages above show school based activity for boys and girls - as can be seen in the upper of the two historic photos, girls can be seen taking part in a cookery lesson, and in the lower shot, boys can be seen taking part in a woodwork lesson. This very gender specific education was something of a relic even then. Many men who survived service in World War One had learned to cook in the trenches, and as part of their military training had learned to iron clothes and darn their socks. During the war, many women replaced men in the heavy engineering factories in the local area; armaments manufacturer Vickers employed hundreds of local women in roles that had originally been available to men only. Once women discovered that they could work just as effectively as the men, this lead to many of them becoming active in the suffrage movement.

Erith Playhouse is the largest public theatre in the London Borough of Bexley. It is a non-professional repertory theatre run completely by their members who have a shared interest in performing arts. Due to the current Covid-19 situation, all plays have been cancelled, and the venue has been shut since early this year. Erith Theatre Guild - the group that run the theatre published the following announcement on their website:- "Following Government advice issued on 16th March 2020 on coping with the Coronavirus (COVID-19), Erith Playhouse has decided that it has become impractical to sustain business as usual at our theatre. We are very sympathetic to people’s personal circumstances, as we are to the audiences who are still excited to visit the theatre and see our productions. So, it is with great sadness that we have decide to cancel all our performances at the Playhouse Erith for the rest of our season. Hopefully, it will be possible to present these shows at a later date. All affected customers will be refunded the purchase price of their tickets, but excluding any delivery charges if applicable". I look forward to when it is able to re-open; it has a large and enthusiastic audience, and a very professional staff of talented volunteers.

After my recent articles on famous local musicians, I discovered an event that happened during Halloween 1974. It involved what was the biggest band in the world at the time, hosting a large party in Chislehurst Caves. Led Zeppelin held a huge blowout bash with their, at the time, manager Peter Grant, at Chislehurst Caves. The party featured some drink servers wearing costumes as nuns, a woman lying down in a coffin completely naked while covered in jelly, and males acting up as wrestlers while naked. The guest list included some of the fresh new acts at the time who are under their label, called Swan Song Records – there attended, Bad Company, The Pretty Things (whom I have written about extensively in the past) and Maggie Bell. Led Zeppelin guitarist Jimmy Page said in an interview:- "We’d been thinking about it for a while and we knew if we formed a label there wouldn’t be the kind of fuss and bother we’d been going through over album covers and things like that,” Jimmy Page told a music magazine in 1977. “Having gone through, ourselves, what appeared to be an interference, or at least an aggravation, on the artistic side by record companies, we wanted to form a label where the artists would be able to fulfill themselves without all of that hassle. Consequently the people we were looking for the label would be people who knew where they were going themselves.” Paul Rodgers, lead singer of Bad Company recalled that signing with Zeppelin’s label was a blessing for them. “Well, it meant really that we didn’t have to worry about the business end of things at all. All we had to do was make the music, go in the studio to record the songs, go out and play them and just not worry about anything, All of the transport was taken care of, private jets and limousines on the tarmac and just everything was top of the line, which was something Led Zeppelin had worked to achieve. They had this sort of machinery in place, and we stepped right into that and it was awesome. All of their connections with the people who run the venues was all ironed out. We were a support act in the arenas the first tour we did. Immediately after that we were the headliner, which was a pretty incredible rise to fame actually.” Email comments to hugh.neal@gmail.com.

Now for the weekly local safety and security reports from Bexley Borough Neighbourhood Watch Association. Firstly the report from Barnehurst ward:- "Again, no burglaries reported on Barnehurst Ward however we have suffered some incidents of vehicle crime. On Sunday 18/10/2020 a rear window to a vehicle was smashed in Eversley Avenue. On Sunday 25/10/2020 again in Eversley Avenue a wing mirror had been ripped off and was found further up the road. In Appledore Avenue on Sunday 25/10/2020 at 21.00 hours a brick was thrown at a parked vehicle causing damage to the roof and bonnet. We have received reports of drug dealing in Hillingdon Road and Eversley Avenue and patrols will be concentrated to these areas. This week our Safer Neighbourhood Inspector Richard Lowe,  joined PCSO Cathy Nolan for a foot patrol around the ward and a vast area was covered including Barnehurst Golf Course area, Martens Avenue, Bursted Woods area, the local shopping area of Barnehurst Road and Eversley Avenue where a visit was made to our Neighbourhood Watch Coordinator". Bexleyheath ward:- "We have had lots of catalytic converters stolen this week, and they are all from HONDA JAZZ models, please be vigilant when parking your cars. Also, ladies if you do have a handbag please place in the footwell of your vehicle and ensure that all of your car doors are locked when driving, take your handbag out of the car when you exit it as this theft was very quick and caught the victim off guard". Crayford ward:- "Much better news this week, no burglaries!  But let’s not be complacent, please see www.met.police for crime prevention advice. Three crimes of note this week, all catalytic converter thefts.  The catalytic converter was stolen from a red Honda Jazz whilst parked in Lea Vale on Sunday 25th October. Whilst parked in Norris Way the catalytic converter was stolen from a vehicle at 22.10 on Sunday 25th October, there is CCTV evidence for this offence. On Tuesday 27th October the catalytic converter was stolen from a blue Toyota Auris whilst parked at Stadium Way, the exhaust was cut too. We will be on late shift on Halloween and will be actively patrolling in areas known for anti-social behaviour". Erith ward - no report this week. Northumberland Heath ward - no report this week. Slade Green and Northend ward:- "Unfortunately, 4 vehicles have been stolen in the last week from various parts of the ward. CCTV and ring doorbell footage for each theft is being looked at. One delivery driver had his vehicle stolen after leaving the engine running and the keys inside. Please be mindful in securing your vehicles at all times. Several stop and searches have been made by PC’s Mark and James resulting in various quantity of drugs seized and the relevant actions taken against the individuals. Extra patrols will be ongoing across the borough this coming Halloween to tackle any increased ASB". Thamesmead East ward:- "Vehicle Crime - MARAN WAY Wed Wednesday 21/10/20 between 8:55 pm - 9:31 pm victim reports suspects removed the vehicle with a tow truck. HOLSTEIN WAY Thursday 22/10/20 between 6 pm and 10 pm victim reports Catalytic converter removed from Honda Civic by suspect/s unknown.  SEACOURT ROAD Thursday 22/19/20 and Monday 26/10/20 Victim reports 3 bags of sharp sand were left in an open back tipper truck which has been removed by suspect/s unknown. PARKWAY between Friday 23/10/20 and Sunday 25/10/20 Victim states suspect/s unknown have stolen Ford Transit van. SYDNEY ROAD Saturday 24/10/20 between 12 midday - 9:47 pm Victim reports unknown suspect/s entered the vehicle and removed two bags from the boot. Victim stated there was no damage to the vehicle as sometimes the boot does not shut properly. WOLVERCOTE ROAD between Sunday 25/10/20 9 pm and  Monday 26/10/20 7 am Victim reports a speaker, charging cable and old bank card removed from victims vehicle without damage by suspect/s unknown. HOLSTEIN WAY between Monday 26/10/20 8 pm and Wednesday 28/10/20 5 pm Victim reports catalytic converter removed from Lexus. Criminal Damage - MANGOLD WAY between Sunday 25/10/20 2 pm and Tuesday 27/10/20 12 midday victim reports vehicle being scratched down one side by suspect/s unknown". West Heath ward:- "There were no reported burglaries from 21/10/20 to 26/10/20. There were two reported thefts from motor vehicles for the same period. On Sunday 25/10/2020 at 1000 hours the informant reported that their vehicle was broken into and items stolen including the locking wheel outside The Pantiles. Thursday On 22/10/2020 at 1115 hours  keys were stolen out of the car’s ignition from an unlocked car outside Gipsy Road".

The end video this week is a short promotional film on the aforementioned Chislehurst Cave - a place well worth visiting post lockdown.  Email me at hugh.neal@gmail.com.