I took the photos above - click on either for a larger view - yesterday at the annual Christ Church Erith Christmas Tree Festival. It was pretty much touch and go as to whether the popular festival was going to be able to go ahead, due to the current Pandemic. In the end, a decision was made to proceed, but with very strict quarantine rules in place. A maximum of fifty people were allowed in the building at any one time, all visitors had to be masked; sanitiser hand wash was available, and all visitors had to be separated by a minimum of two metres during their visit. There was a one - way route around the historic church, as you will see from the white arrows on the floor. I have been helping out at the event for several years, and visitor numbers were substantially down from previous events, which I suppose is only to be expected under the exceptional circumstances. Those who attended expressed their gratitude that the festival - which forms a vital part of the local social calendar - was able to go ahead, even with the restrictions that I outlined. Several people said to me that they were glad that the festival was able to take place - as it was a small part of the annual calendar that still appeared to be "normal" to them, after so much uncertainty and disruption over so much of this year. The Christmas Tree Festival is a major social event for the Northern part of the London Borough of Bexley - with visitors coming from as far away as Milton Keynes to visit.

I have frequently bemoaned social networks like Facebook, and how some people seem to publish all sorts of intimate and what one would have thought were private details about themselves. If that were not bad enough, the professional social networking site LinkedIn is now the target for organised cyber criminals. LinkedIn, which has over 600 million users globally, is a prime target for scammers looking to connect with professionals across a variety of industries, including information security and oil and gas. Scammers copy information from real LinkedIn profiles to pose as recruiters and attract new connections. Security analyst Symantec have been investigating the situation. They found that most of these fake accounts followed a specific pattern. They bill themselves as recruiters for fake firms or are supposedly self-employed and primarily use photos of women pulled from stock image sites or of real professionals. The primary goal of these fake LinkedIn accounts is to map out the networks of business professionals.  Using these fake LinkedIn accounts, scammers are able to establish a sense of credibility among professionals in order to initiate further connections. In addition to mapping connections, scammers can also scrape contact information from their connections, including personal and professional email addresses as well as phone numbers. Symantec said LinkedIn users should be very sceptical of who they add to their network. “If you’ve never met the person before, don’t just add them. We weren’t surprised to learn that these fake LinkedIn accounts received endorsements from real users”. I would add to this by recommending that if you are a LinkedIn user, and you receive a request from someone that you don’t know, do a Google search on the person to see what you can find out about them – and if they actually exist at all. As always, be careful; once something is online about you, it is impossible to remove it. Publishing anything online is very much a one – way process. 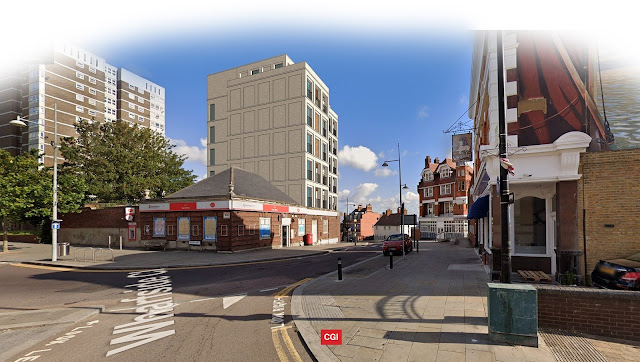 The upper of the two images above shows a sight that will be familiar to local residents - the greatly used Erith Post Office, and the site adjacent to it that used to house company WDS Signs, but has been vacant for some time now. The lower architect's impression shows what may be a possible redevelopment of the WDS Signs facility. The details of the proposal are as follows:- "Proposed Scheme submitted as Pre-App enquiry: Construction of a Seven Storey Block providing 22 Residential Units, 270 sq m (2,906 sq ft) of Commercial Space and associated Parking. Proposed Residential Accommodation : Twelve x 1 bedroom, Six x 2 bedroom and Four x 3 bedroom flats". I have been reliably informed that the site was due to go to auction on the 29th of October, but the lot was withdrawn prior to the auction date, as it had been privately sold. I have doubts as to whether the proposed flats get built in the currently shown design, as the site is within the Erith High Street conservation area, which places limits on new build structures. More on this story in the weeks to come. If you have any information on this matter, please contact me in complete confidence at hugh.neal@gmail.com.

One relatively new occupant of the high street is very much a Kentish invention; this year marks the fifteenth birthday of the Micro Pub. The very first Micro Pub – the Butcher’s Arms, was opened back in 2005 in Herne Bay; since then over two hundred Micro Pubs have opened – many in Kent and South East London, as well as plenty all over the country. Locally we have five – The Kentish Belle next to Bexleyheath railway station, The Bird and Barrel in Barnehurst, The Broken Drum in Westwood Lane, Blackfen, The Door Hinge in Welling High Street, and The Penny Farthing at Waterside in Crayford, conveniently situated right next door to The Crayford Tandoori - a match made in heaven if ever there was one. The massive popularity of Micro Pubs does pose the question, just what exactly is a Micro Pub? The definition of a Micropub is difficult. It is a set of ethics rather than a set of rules A 'Micropub' according to the Micropub Association is defined as follows: "A Micropub is a small freehouse which listens to its customers, mainly serves cask ales, promotes conversation, shuns all forms of electronic entertainment and dabbles in traditional pub snacks' There may be differences between the pubs; they may or may not have a bar, they might serve beer straight from the cask or through hand pumps. But they are united in one philosophy. A simple pub with the focus on cask beer and conversation for entertainment. The basic premise is KIS, KIS – Keep It Small, Keep It Simple". The landlord of the Butcher’s Arms, and the person credited with creating the entire concept, Martyn Hillier said “The Micropub Association will be a place where like-minded real ale lovers can share their Micropub experiences. The Micropub Association will also be a platform for the new Micro Pubs to tell the beer drinking community about themselves. A successful Micropub is based upon good ale and lively banter and I want this to come across through the Micropub Association. Ultimately I’d like to think that we could become a useful lobby group to support the likes of CAMRA and SIBA, promoting the real ale experience”. How micro pubs will fare by the time the pandemic is finally over, only time will tell.