In what is becoming something of a depressingly regular occurrence, another local bank branch has now closed for good. After Barclays Bank in Erith Riverside Shopping Centre, and Lloyd's Bank in Nuxley Road, Upper Belvedere, now the popular HSBC branch in Bexleyheath Broadway has permanently closed. As has been the custom when the other branches closed, within hours of the doors shutting for the last time, all identifying features such as the sign and any references to the HSBC brand were removed. This seems to be a consistent pattern amongst all of the major high street banks when they close down a branch. It reminds me of Stalin era Soviet propaganda photographs, where senior Communist officials would be airbrushed out of photos when they fell out of favour with the dictator, and he had them shot.
You may not be aware that the local bin collection service is about to be suspended for two weeks; Serco, the company that Bexley Council employs for domestic and commercial waste collection is currently in serious dispute with many of its employees in the borough, who have voted to go on strike for two weeks from the 12th of July. Here is the wording of the official announcement of the impending strike:- "Bexley will be hit with a ‘summer stink’ when Serco refuse and cleansing workers strike over low pay and poor treatment, Unite, the UK’s leading union, said. Around 140 Unite members will take part in two weeks of strike action – from 12 July until 25 July – over a ‘pathetic’ 1.5 per cent pay offer, disparities in pay for workers doing the same jobs, the removal of industrial sickness benefits and Serco’s refusal to handover years of back pay owed to nearly 50 staff. Outsourcing giant Serco, which runs the contract on behalf of Bexley Council, has failed for half a decade to include refuse and cleansing staff on a stipulated pay progression scale. The situation has led to instances of refuse truck drivers being on the same pay scale as street sweepers, with some staff being owed thousands in back wages. Unite members are also angry at the company’s 2021 pay offer of 1.5 per cent. Unite members have worked throughout successive national lock downs to keep the service running, risking their own safety as well as their families. Refuse staff in Bexley earn much less than their counterparts in other areas of the capital. For example, in neighbouring Greenwich refuse staff earn a minimum of £13 an hour, compared to £10.25 paid by Serco in Bexley, which is below the London Living Wage. Unite has also accused of Serco of victimising union members through the unfair policing of its substance misuse policy. As the dispute has grown in severity, Serco has increased random workplace drug and alcohol tests, while providing no help or advice for those who may need it. Unite believes the increase in drug testing has been used to target workers for standing up for themselves, as the tests were not linked to any reported safety issues". Whatever the pros and cons of the industrial action, one impact of a suspension of the local refuse collection service will almost certainly be an increase in illegal fly - tipping. Fly tipping is a particular problem in the local area, and is one of the biggest headaches for borough councils all around Greater London. Figures reported in the Evening Standard this week show that fly tipping is costing London council taxpayers in excess of £25 million every year to clear away illegally fly tipped waste. I understand that Bexley Council pays a contractor around £300 a load to take away illegally tipped waste. Some other London councils are making moves to increase fines for fly tippers. Currently the fine is £80, which is often cheaper than the cost of a small business paying a disposal fee at a licenced waste disposal tip. Newham council across the river spent £3.5 million last year cleaning up fly tipped rubbish, and their records show that their operatives cleaned up an average of nearly two hundred fly tips a day. Even the councils for affluent areas such as Kensington and Chelsea suffer from the problem. Last year they spent £219,000 prosecuting fly tippers, but only made back £505 in fines. The problem for councils is that catching and successfully prosecuting fly tippers is notoriously difficult. The burden of proof is exceptionally high – may fly tippers are businesses, and even if a number plate of a vehicle used in tipping is recorded by a witness, the company will often say that they don’t know who was driving the vehicle that day. I have previously been involved in case which not only ended up with a prosecution, fine and confiscation of the vehicle involved, but also a custodial sentence of eight months for the guilty party. Unfortunately that was the exception, rather than the rule in such cases. What do you think? Email me at hugh.neal@gmail.com. 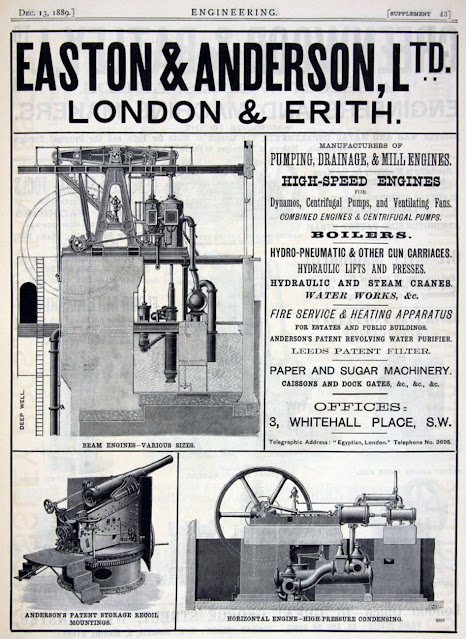 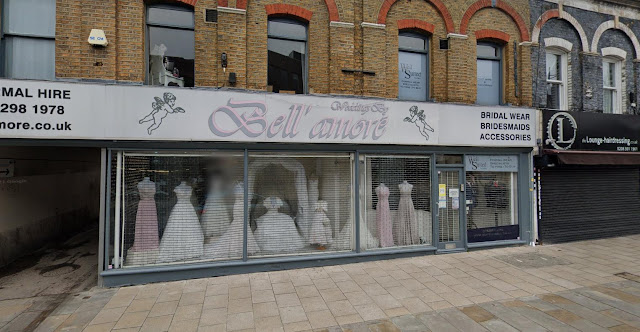 On Thursday afternoon, I was walking along Bexleyheath Broadway - where I took the earlier photo of the newly permanently closed HSBC bank branch. Whilst in the Broadway, I paused outside of the Bell Amore bridal shop, which you can see in the photo above - click on it to see a larger version.  Many years ago the shop was the location of what many considered to be the best home electronics store in the area - Whomes - a retailer that had been in business for many years. Edmund Whomes came from a family of church organists, and he started his piano shop in the Broadway in 1871 when he was appointed organist of Christ Church Bexleyheath, a post he held until 1925. His son and grandson continued the shop, and it evolved from selling musical instruments to records and gramophones, later to televisions, washing machines and fridges. In the 1980's the store concentrated on high quality hifi and TV equipment. It survived until 1989 when it could no longer compete with the large chain stores, and it closed down after 118 years of trading. 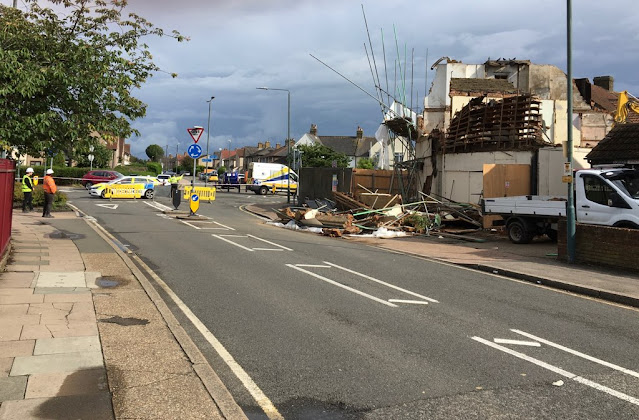 The photo above was taken on Tuesday afternoon, after a building located on the corner of Wickham Street and Central Avenue in Welling collapsed whilst it was in the process of being demolished. The building had been empty and unused for over a decade, prior to which it had been the home of a motor spares retailer, and before that it was a greengrocers shop. My source on the ground tells me that several demolition workers were on site when the collapse occurred, and that at least one person received injuries, and was hospitalised as a result. It has been alleged that the collapse was caused by local high winds. I would anticipate that the incident would need to be investigated by the Health and Safety Executive. The official Fire Brigade report into the building collapse reads as follows:- "Amongst the various calls attended by the Boroughs firefighters this week was a call to a collapsed building in Welling. On arrival crews established the building was actually in the process of being demolished and the collapse was actually the scaffolding surrounding the building. Thankfully no one was close enough to be injured however this could have been a very different incident if people were walking or driving close by when the collapse happened. Our control dispatched an Urban search and rescue adviser who attended to develop tactics and determine whether specialist resources would be required. Our Urban search and rescue teams attend incidents such as gas explosions, terrorist attacks, large scale flooding and building collapses such as the apartment block in Miami you may have seen on the news. These specialist resources are prepared to stay on scene for hours sometimes days to ensure the safety of emergency service responders carrying out rescues". Comments to me at hugh.neal@gmail.com.
A report published in the New York Times poses serious questions about the long held belief that breakfast is the most important meal of the day. It turns out that the idea is the result of spin over the years by breakfast cereal companies and others. skipping  breakfast can allegedly lead to weight gain, a sluggish metabolism, or stress. According to a new piece in The New York Times however, our beliefs about breakfast are all based on "misinterpreted research and biased studies"–propaganda, basically. Author Aaron E. Carroll notes that almost all breakfast studies suffer from a "publication bias." There are flaws in reporting of studies that skew findings to link skipping breakfast with causing obesity. Carroll writes: "The reports improperly used causal language to describe their results. They misleadingly cited other's results. And they also improperly used causal language in citing others' results. People believe, and want you to believe, that skipping breakfast is bad. Additionally, there are usually conflicts of interest behind the studies, considering most of them are funded by the food industry. The Quaker Oats Centre of Excellence, for instance, paid for a trial that concluded eating oatmeal or frosted cornflakes reduces weight and cholesterol. People are conditioned from a young age to believe that breakfast is essential to performance. It turns out that's because most of the research geared toward kids is meant to evaluate the impact of school breakfast programmes. They don't take into consideration that 15 million children in the U.S. go hungry at home–of course they would do better in school if they eat. That isn't the same, though, as testing whether children who are already well nourished and don't want breakfast should be forced to eat it," Overall, you should just go with your gut. If you're hungry in the morning, eat. If you're not, don't think you're sinning by skipping it. Finally, approach all studies sceptically – Carroll put it best: "Breakfast has no mystical powers." 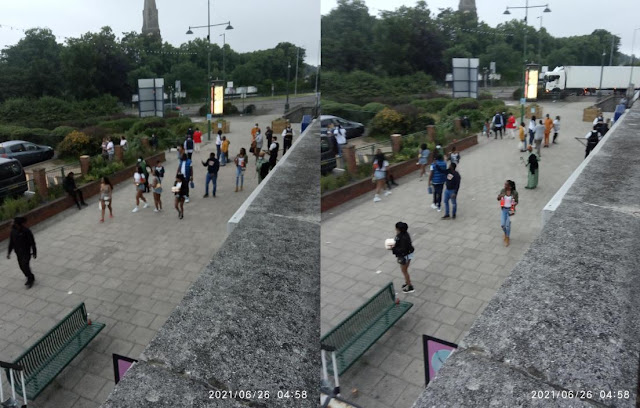 The following incident was reported to me by two separate eye witnesses. The events took place in the very early morning of Saturday the 26th of June in Pier Road Erith, and in the P2 Events Centre on the upper floor of the old Electricity House building - in what was the old Erith Snooker Centre, but can only now be publicly released. One witness, who wishes to remain anonymous writes:- "In the early hours Saturday morning. At least 17 Metropolitan Police Officers were in attendance at the above address in response to reporting on yet another large gathering taking place at the venue. 01.00hrs onwards A noticeable influx of vehicles in Pier Rd car park and the vicinity, transpired into what soon became a major source of much anti-social noise and disturbance outside. This continued throughout the night as even more people were arriving. Most attendees were youths. Description of appearance - Suitably dressed for going out nightclubbing. Although music was heard intermittently, volume remained low - Police shared details of internal findings-revealing that headphones had been observed in use at this "Silent Rave" Police asked Questions RE: licensable activity provision/consumption of alcohol + planning restrictions etc. Answer- No permission sought or granted whatsoever by Authorities? From amount of cars it was estimated for 150 people inside, However, upon closer inspection Police reckoned actual figures were considerably more - In excess of 400 people. Police expressed grave concerns - How so many people could possibly escape from the building safely in the event of a fire? Public Safety risks must be ascertained urgently. Officers were insistent "The venue should not be operational"  stating that " It is up to The Local Council - They have got full powers to shut the premises down immediately."
No ward reports from the various Police Safer Neighbourhood Teams this week - as previously mentioned, the level of reporting from the Police has unfortunately reduced to almost nil. Something I know that Bexley Borough Neighbourhood Watch Association are unhappy about.

The end video this week was suggested to me by regular reader and occasional contributor Miles; it features the giant, automated Ocado warehouse in Erith, which is currently the largest and most sophisticated of its kind in the world. YouTube giant Tom Scott recently visited the place; here is what he found...