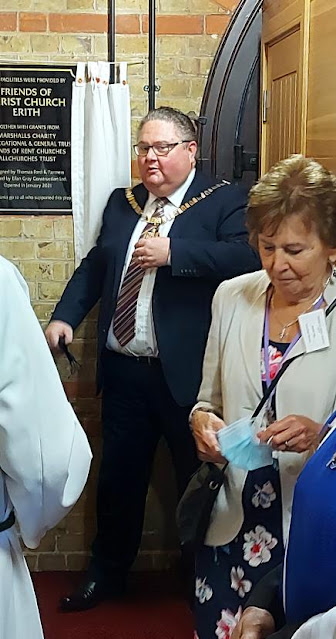 The photo above was taken by me only about an hour ago; it shows the Mayor of the London Borough of Bexley, Councillor James Hunt, as he unveiled the dedication plaque to the toilets in Christ Church Erith. The toilets were funded by a number of grants, and by money raised by The Friends of Christ Church Erith, who also managed the design, construction and commissioning of the new facility via a number of third party specialists. Chair of the friends group is Doreen Ives, who can be seen in the foreground of the photograph; click on the image to see a larger version. Due to a number of complex and often demanding issues, the installation of the toilets have taken approximately five years from inception to completion in January of this year. If you would be interested in joining The Friends of Christ Church Erith, and helping to preserve the historic, listed building, then please click here for details of how to join the group. 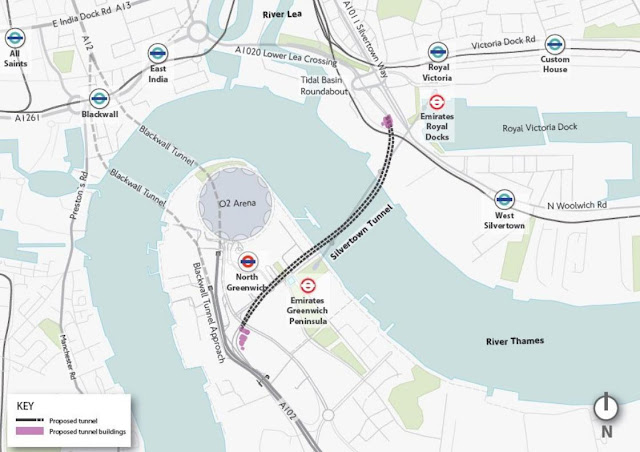 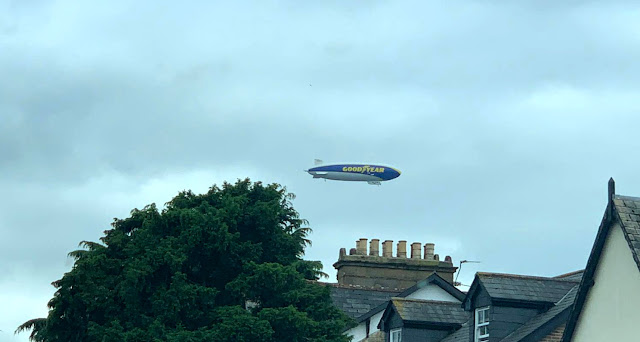 The Goodyear Blimp, last seen in the UK back in 2012, has recently made an appearance in the air above the local area.  The photo above (click on it to see a larger view) was taken on Wednesday by Ian of The Belvedere Splash Facebook group. The photo shows the Blimp flying over Upper Belvedere. Why a Blimp and not an airship I hear you ask? Well, there is a vital difference between the two lighter than air vehicles. An airship has a lightweight chassis framework over which the material of the external structure is stretched. This makes for a rigid, but expensive design. You can see photos of the Stella Zeppelin I took back in 2008 here. A blimp is simpler - it relies for its'internal gas pressure to hold the shape of the exterior shroud. Blimps are a lot cheaper to manufacture, but are very hard to control in crosswinds or other complex weather. The Daily Telegraph and the Daily Mail both inadvertently gave support to the rumour that a UFO had been spotted over the Stratford stadium during the firework display that marked the ending of the opening ceremony at the 2012 Olympic Games. You can see what the Mail said at the time, by clicking here. As you will see from their breathless and rather under researched prose, they were pretty convinced that ET was about to land in the East End. The trouble was, if you listen to the sound track of the video footage, you can clearly hear a couple of four stroke petrol engines. Now, I don't know about you, but if I was needing to traverse vast swathes of interstellar space, I would want to use something with a bit more poke than a brace of Volvo six pots. If you watched the BBC TV coverage of the opening ceremony at the time, there was extensive footage shot from above, from precisely the location where the flying saucer was supposed to have been. Starting to see a pattern here? The "UFO" was actually the shiny underside of the Goodyear Blimp, reflecting the flashes of the fireworks as it was used as a filming platform by the Beeb. Only the very most hard of thinking cannot have worked this out. It was lazy journalism to have so unthinkingly reported what really was the most flimsy of stories that stood up to very little in the way of analysis.

The apartment block under construction on the corner of Nuxley Road and Woolwich Road in Upper Belvedere is now almost complete. The block of flats, on the site of the former Belvedere Police Station, is far larger and more imposing than many locals anticipated. As previously mentioned, the developers managed to get the original planning permission for the building amended so that an additional storey was added to the already large building. When I attended the original planning presentation for the proposed development, the staff assured visitors that the block of flats would be very similar in profile and dimensions to the Police Station. This has not proved to be the case in reality. What do you think? Email me at hugh.neal@gmail.com.

On the 30th of June, The Ministry of Housing, Communities & Local Government and Luke Hall MP published the following announcement:- "The government has appointed independent reviewers to undertake assurance reviews into 8 councils, following decisions earlier this year to provide exceptional financial support to these authorities. The government has formally appointed the Chartered Institute of Public Finance and Accountancy (CIPFA) to undertake the financial element of these external assurance reviews. This follows a decision to provide exceptional financial support packages to 8 councils subject to an external review. These authorities are Bexley, Copeland, Eastbourne, Luton, Peterborough, Redcar & Cleveland, Slough and Wirral councils. The external assurance reviewers will provide a detailed assessment of each councils’ financial position and management, making recommendations where necessary of how each council can take action to improve". So, by the government's own admission, Bexley Council is now firmly sitting on the naughty step in respect of managing its finances. Will this mean changes at a senior level in Bexley Council leadership? I somehow doubt it, but hopefully time will tell.

One thing seems clear to me since The News Shopper closed its Petts Wood Office and made its reporters spend much of their time working from home; through no fault of their own, the accuracy of their stories has suffered to a greater or lesser extent. They have also eliminated the role of staff photographer – a pleasant chap I have bumped into at many events over the last few years. The News Shopper seems now to rely on (usually poor quality) photos taken by eye witnesses using camera phones, and to employing stock images. They also seem to have increased their usage of screen captures from Google Street View. I understand that this is all a means to reduce overheads – running a local paper nowadays is a really hard thing to do, with advertising rates static or decreasing, and the widespread use of browser ad blockers by visitors to their website. I can appreciate all of these decisions the newspaper has had to make in order to be competitive, and indeed to survive. What I cannot understand is the dislocation of reporters from the local area when it affects the quality and accuracy of reporting. As if this was not bad enough, not long ago The News Shopper put its website behind a paywall. A move that was in my mind stunningly naive and poorly thought out. As many will know, a few years ago, The Sun newspaper put its website behind a paywall, and its online readership immediately fell off a cliff, from which it struggled to recover. Under pressure from advertisers and angry readers, The Sun eventually was forced to remove the paywall and revert to a free website. If a best selling national tabloid newspaper cannot make a paywall work, how can a tiny local paper with a relatively small readership be expected to? Currently there is no journalist covering local council related events in the London Borough of Bexley. Darryl of the excellent 853 Blog, which covers news stories in Greenwich, Charlton and Lewisham has recently reported that The News Shopper lost the services of its BBC funded Local Democracy Reporter for Bexley, when it contract was not renewed. The News Shopper print edition has been getting progressively thinner over the last couple of years, and it has already stopped printing editions for the boroughs of Greenwich and Lewisham last year, as 853 has recently reported. On top of this, the local area has also lost The Kentish Times and The Bexley Times, leaving the borough with hardly any local news coverage.

As previously mentioned, the weekly Police Safer Neighbourhoods ward reports have now been discontinued - much to the disappointment of many local residents. Having said that, there is still quite a bit of local crime prevention news from Bexley Borough Neighbourhood Watch Association, including this announcement:- "Bexley Borough Neighbourhood Watch Association (BBNWA) are pleased to announce that Committee Member Karen Nathan was formally appointed as Chair of Bexley Safer Neighbourhood Board (SNB) on Thursday 24th June 2021. We would like to wish Karen all the best in taking the SNB forward and are pleased that she will continue as a Neighbourhood Watch Committee Member". Ourwatch Scam Campaign - From Neighbourhood Watch Office - "Ourwatch is hosting a number of online webinars in July to coincide with our Scams campaign.  The webinars are FREE to attend and are open to anyone who would like to know more about scams, the psychology behind scams, prevention, and how a fraud case is investigated. The webinars bring together experts in their field relating to online fraud, a topic which we are all too familiar with and can affect anyone and everyone, as our lives are played out more digitally. The dates of the webinars and their topics are as follows: Exploring the psychology behind scams and how scammers are so effective at their crimes. Tuesday 6th July, 5 pm. Paul Maskell, Fraud & Cyber Crime Prevention Manager, Dedicated Card and Payment Crime Unit (DCPCU). Insights into how a fraud case is investigated and how not to be the next victim. Wednesday 14th July, 5 pm. Ben Hobbs, Detective Sergeant; and Catriona Still, Head of Fraud Prevention & Training, Dedicated Card and Payment Crime Unit (DCPCU). Scams awareness training from the Friends Against Scams initiative. Friday 23rd July 5 pm. The National Trading Standards Scams Team (NTSST). Don't get hooked by scammers! What you need to know about flubot and phishing scams. Friday 30th July 5 pm. Christopher Budd, Senior Global Threat Communications Manager, Avast. To book, all they need to do is go to www.ourwatch.org.uk/webinars and click on the webinar that they wish to attend, they can attend all of them if they wish and then complete the registration page".

The end video this week is by a London based transport historian who goes by the pseudonym of Jago Hazzard. This new video from him covers the history of The Woolwich Ferry, as I covered earlier in this update. Who says I don't plan these things? Do give the video a watch, and feel free to contact me at the usual address - hugh.neal@gmail.com.