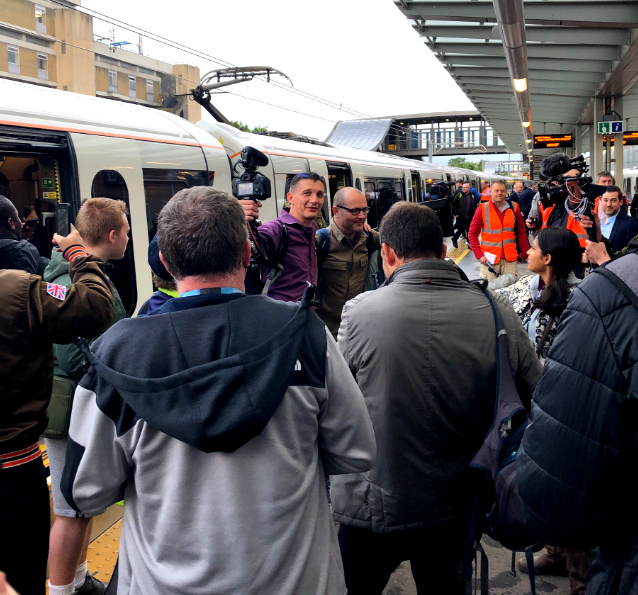 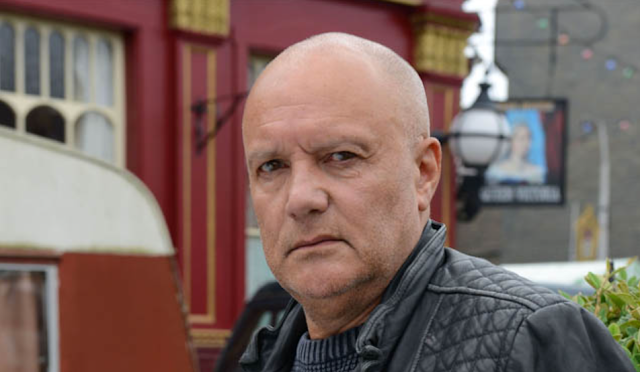 British film and television actor Karl Howman is well known to many audience members for his work with the legendary comedy writing duo John Esmonde and Bob Larbey in the late 1980’s. Appearing as Jacko in Esmonde & Larbey’s Brush Strokes and Mulberry in Mulberry, Howman is a versatile and memorable actor who has played a number of both comic and dramatic roles. Appearing on both the big and small screens Karl Howman’s filmography includes a vast range of genres, from the video Nasty Expose, 1980’s gangster hit The Long Good Friday and, more recently, the Anglo-American rom-com The Truth About Love. He also had a regular role in Eastenders for a couple of years. He has also appeared in a number of TV shows, including The Professionals, Minder, The Bill, Blake’s Seven and Casualty, to name a few. He is also well known for providing voice overs in a number of TV adverts. He was also the face of the Flash cleaning products commercials. What many people are not aware of is that Karl Howman was a local lad; he was born in Woolwich, and he lived for many years in The View, off Woolwich Road in Upper Belvedere. He attended Picardy School in Erith Road - what is now Trinity C of E school. By all accounts his academic record was not impressive; he was however a very gifted sportsman - he was captain of the Picardy 1st 11 football team - one account says he avoided expulsion for bad behaviour on at least one occasion because of this. Upon leaving school he had a trial with Charlton Athletic, though this did not result in him being hired by the local club. Howman is, even after a considerable period of time, best known for his starring role in the sitcom Brush Strokes, which was broadcast on BBC television from 1986 to 1991. It depicted the (mostly) amorous adventures of a wisecracking house painter, Jacko, played by Howman. There were 40 episodes spread over five series. Karl Howman kept a fairly low local profile, though he did attend a few fairs at Picardy School, where he was the guest of honour. I saw him on a semi regular basis on Friday evenings at the height of his fame. He used to park his red Ferrari 328 in Nuxley Road, Upper Belvedere, whilst he popped into Mr Mann’s fish and chip shop to pick up a takeaway fish supper for him, his wife and children.
Some of the most important and interesting stories that I feature on the Maggot Sandwich are those sent to me by readers; contrary to some opinions, I do not find every story myself. In some cases the people who supply the information prefer to remain anonymous, and I will always respect this; other times the person is happy to be named.Regarding submitting stories for inclusion on the Maggot Sandwich, some guidelines; any story needs to be with me by the Thursday night prior to publication on Sunday; this is to allow me to check the factual accuracy of the story, and to edit and reformat the text where necessary. Please send text in plain Email format - not in Microsoft Word, as contrary to popular opinion, Word is not a standard format (a word document contains a lot of hidden metadata that has to be stripped out prior to being uploaded into the Blogger interface). I do occasionally get stories sent to me on a Sunday morning, with a request that it be included in the latest update - which is published early on each Sunday afternoon. Unless there is a really compelling reason, such stories will be carried over to the next edition. Every Maggot Sandwich update takes around ten hours to research, write, edit and error check, all of which is carried out in my spare time. I do not accept advertising or any kind of goods in kind for any promotion - the blog is entirely run as a free local news and information portal with no political or economic bias. 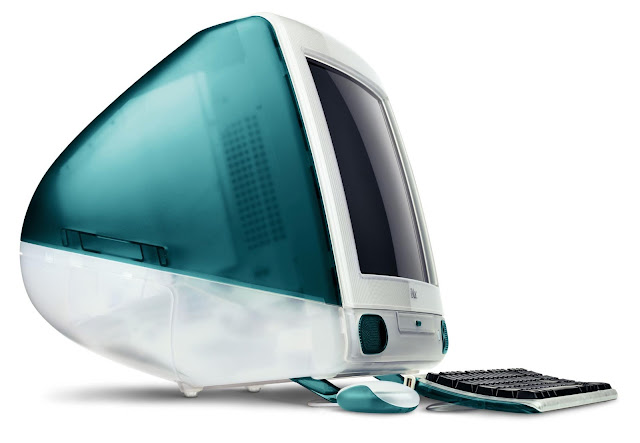 The highly influential iMac range of computers from Apple had its twenty fourth birthday last week. The original - and some way the most revolutionary - version of the computer was launched in May 1998. You can see a photo of the "mark one" version above - click on the photo for a larger view. The original iMac was a product full of firsts. It was Apple’s first computer to be built for the internet era (that is where the i comes from.) It was the first to drop all legacy I/O such as serial and parallel ports in favour of the more modern USB standard. It was the first to show that computers could be cool. To design the iMac, Apple pushed its latent industrial design team, a group that had been underserved by previous company leaders. While the iMac wasn’t the first Apple product to use translucent plastic, it was decidedly more “Un-PC,” without a spot of beige to be found. At the time, all other desktop computers were inevitably beige in colour - whilst other manufacturers were aware that other colours were available, the beige option was the cheapest to produce, as being beige at the outset tended to hide the case discolouration over time due to the Bromine compounds introduced into the ABS plastic to act as a fire retardant. Incidentally old computer restorers have created a chemical cleaning product called Retrobright to restore discoloured computer cases, which I wrote about back in 2014, that you can read here. I digress; The iMac did not come with a bland beige case; quite the opposite. Then-Vice President of Industrial Design, Briton Sir Jony Ive asked “What computer would The Jetsons have had?” when designing the original iMac. Retro-futurism played a quietly important role in the computer’s appeal to customers, which was reminiscent of both the aesthetic used in the animated cartoon series and even vintage computer terminals. The iMac’s vibrant hues also embodied the spirit of 1960s Olivetti typewriters, which were notable for their use of colour in a market dominated by dull, corporate designs. 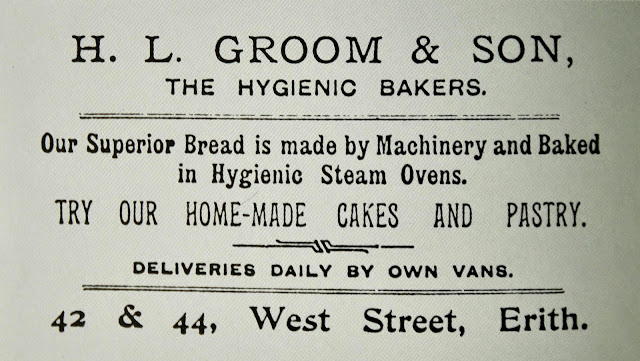 The advert above was first published back in 1903. It does rather infer that other local bakers were not hygienic - I am not sure if such an advert would be permitted nowadays. Still, it does show that even 118 years ago, a local food producer was very conscious about cleanliness. Something that some local outlets today seem to have forgotten.

The latest radio listening figures from industry body RAJAR (Radio Joint Audience Research) show that BBC Radio 6 Music has achieved its highest ever audience with 2.8 million listeners tuning in each week. This comes as the station recently celebrated its 20th birthday. BBC Radio 2 has seen a dip from 14.9 million in Q4 2021 to 14.6 million in Q1 2022, with The Zoe Ball Breakfast Show being down to 7.4 million, from 7.5 million the previous quarter. BBC Radio 1 has lost listeners across the day – down 6% to 7.7 million and Greg James at breakfast is down from 4.5 million to 4.1 million listeners. Chris Moyles on Radio X at breakfast is still ahead of Chris Evans on Virgin Radio. Both Moyles and Evans saw a slight drop in numbers for Q1 2022 compared to Q4 2021 – Moyles from 1.2 million to 1.1 million and Evans from just over 1 million to 964,000. Capital, KISS, Magic, Smooth and Heart all saw a fall in the audience, but Heart Breakfast with Jamie Theakston and Amanda Holden is the biggest commercial radio show in the UK and the biggest commercial breakfast show with 3.9 million listeners. The Hits Radio Network’s reach increased by 2.4% to 5.8 million, while the Greatest Hits Radio Network continues its growth with a 26% increase to reach 4.2 million. Simon Mayo has increased the audience for his Drivetime show on GHR by nearly 20% with 1.6 million now tuning in to his show each week, he says: “It’s so fantastic to be back on Drivetime. We are all having a blast and thrilled the audience keeps getting bigger”.

The end video this week is another short piece by transport journalist and YouTuber Geoff Marshall, as I mentioned at the start of this Blog update - who says I don't plan these things. Geoff visits Abbey Wood Station on the day of the launch of the Elizabeth Line, and meets many people who join him on the first passenger train out of Abbey Wood Station, on the way to Paddington Station. Comments and feedback to me at hugh.neal@gmail.com.