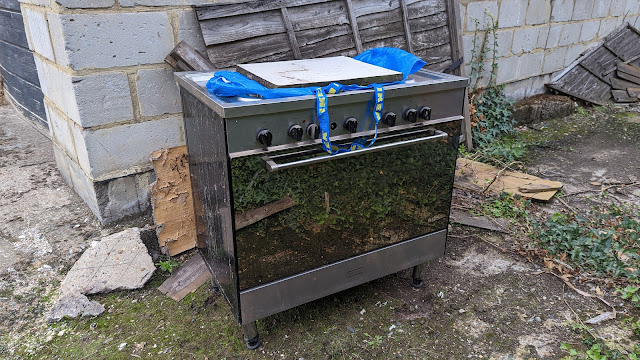 There have been many occasions in the past when I have written about the scourge of fly tipping. As many readers will recall, I have been involved with the fight against this criminal activity. It is something that never ceases. Last week I was the victim of a criminal fly tipper. On Thursday morning I looked out of my home office window which overlooks my back garden and my parking area to discover that a large object was sitting on my property. Upon investigation, it turned out to be a large six burner range cooker. As you can see in the photo above - click on it for a larger version. I was understandably annoyed by this, but after some investigation I discovered who the culprit was. Suffice to say I was not best pleased. I have now had the old cooker removed for recycling, along with some other objects that were dumped at the same time. My property is now cleared of the fly tipped material. As far as the culprit is concerned, I will be having words. What do you think? Email me at hugh.neal@gmail.com.
This week marks the thirty first birthday of the free and open source Linux operating system. I have been using Linux since back in 1997, when it was very much the purview of IT professionals; it was lacking features, incompatible with a lot of hardware (getting online with Linux back in the day was an exercise in frustration – even very common hardware such as the then ubiquitous U.S Robotics 56K modem could be an utter pain to get working). I recall the hours I spent trying to get my Red Hat 5.1 Linux installation to do what it should do. Back then Linux was far more stable than Windows 98SE or Windows ME (oh the horror!) but conversely you had to be a real guru to get things done. I think this is where the negative image of Linux being unsuitable for the desktop came from. Nowadays things are far better – device support is superb – in many cases better than Windows and Linux now “just works”. Very few people ever install a computer operating system from scratch – they buy a machine with a preinstalled OS and it stays on the machine for its life. Tinkerers like me do OS installs on a regular basis. It really is straightforward whether you are talking Windows 11, Ubuntu or MacOS. You just follow the onscreen prompts and it pretty much does it for you. Personally I think that Linux has made far more of an impact in ways that few people realise – Google, FaceBook, Twitter, Gmail and every single one of the 500 most powerful computers in the world all run a version of Linux; it would be true to say that the Internet runs on Linux. If you have a smartphone that is not made by Apple, or a flat screen television, a set top box, whether it be a Sky satellite TV receiver, Virgin cable box or a Freeview receiver, they all run embedded Linux – it is the only operating system that powers devices from a toaster to a supercomputer with everything in between. Android, as used in smart phones and tablets is actually Linux with a whizzy interface suitable for touch operation. You can see from this that whilst Windows has for decades dominated the computer desktop, it has had little influence on the infrastructure and underlying technology of the modern world. As society moves away from large desktop PC’s, (and to a lesser extent away from the traditional laptop) and relies for online connectivity from smart phones and tablet devices, the underlying operating system has less significance than the applications that users wish to run – indeed, many applications are nowadays run online in a browser window – sites such as FaceBook, Instagram, Flickr and Twitter don't require a locally installed application, just a browser with connection to the web. Google grasped this early on with their excellent Google Docs (now called Google Workspace) application suite and its close integration with both Gmail and Google Drive storage. The Google Chromebook range of computers embraces this – they are cheap, relatively low powered laptops that just run a the Chrome web browser and enable cloud based storage.

A local company has been involved in an inquest, following the tragic death of a woman who ate one of their products that formed one of the ingredients in what was meant to be a Vegan wrap. The story has made the national news. You can read about it by clicking here. There is more on the story on the BBC News website here. The company involved in the unfortunate case is Erith based Planet Coconut. Further details of the case can be found by clicking here. 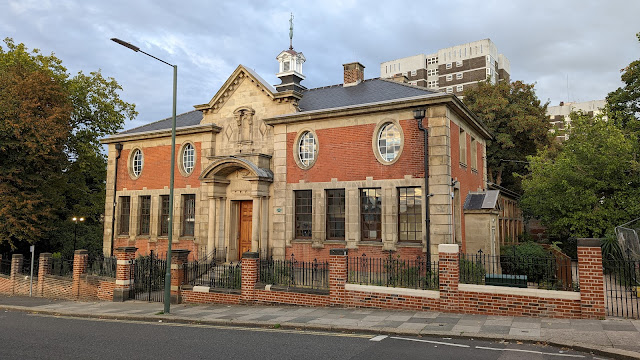 Click on the photo above to see a larger view; the new railings outside of the Old Carnegie Library in Walnut Tree Road, Erith have now been fitted. The temporary hoardings that have surrounded the building since the start of refurbishment and conversion work first began have now been removed to reveal the full extent of the work that has been done to the imposing Edwardian civic building. For more details on the library, and The Exchange that now operate it, then click here.

Electric scooters are set to be removed from the streets of Kent following safety concerns. The pilot scheme in Canterbury has been terminated after an 80-year-old woman was knocked over by a rider on the pavement. In July, Sarah Carter, 80, a retired university librarian, suffered significant injuries including a broken wrist, cracked jaw and broken cheekbone.She said in an interview with website Kent Live that : "Another elderly person could have quite easily been even more seriously injured or even killed." Kent County Council refused to renew the e-scooter contract with provider Bird, which began in November 2020 and had already been extended twice. Councillor David Brazier, Kent County Council's cabinet member for transport overseeing the trial, said: "I decided to truncate it before someone was seriously hurt." Trials in parts of Greater London continue. In a poll that ran from 11am on Wednesday, September 14, to 4pm on Tuesday, September 20, on the Daily Express website asked readers: "Should e-scooters be banned over safety concerns?" Overall, 3,640 readers cast their votes with the vast majority, 90 percent (3,283 people), answering "yes" e-scooters should be banned over their safety. A further 10 percent (350 people) said "no", they should not be banned, while just seven people said they did not know either way. Comments from readers included the following:- "They should be banned all across the UK. How many more people have to get injured or killed before something is done about them?" Another wrote:- "They are a danger to the riders on the roads and a menace to others on the footpaths. They have no means of identification, no enforcement is in place and no insurance for the injuries they inflict on others. Until these issues are addressed, and there is no sign of that happening, they should be banned." It should be noted that readers of the Express tend to be older and socially conservative, so the poll does not give a representative reflection of the views of the UK as a whole. I have a personal involvement with the whole issue of electric scooters and other electrically powered vehicles that use footpaths as some readers will be aware, back in February I was the victim of a hit and run collision with a an electric scooter. I was hit from behind and knocked flat on the floor whilst the rider made off. I had extensive injuries including cuts and bruises to my face, severe bruising to my chest and left side, and an injury to my left shoulder which is still painful, over seven months later. Nobody was ever charged with the crime. Despite this, you might think that I was going to announce that I was anti electric scooters, but this is not actually the case. I feel that in many cases they can be beneficial both to the rider and to the environment when used for short distances, where otherwise a car or motorbike might be used. In my opinion, the problem is not with the technology, it is with the culture and behaviour of some of the more irresponsible users. I feel that there does need to be some form of licencing registration and insurance that would be compulsory for users of such vehicles. I also feel that technical standards would need to be set, as many of the current electric scooters on sale in the UK have very poor if any safety features built in, and have been known to cause several major fires. This is the reason why such vehicles are now banned by transport for London. Local electric vehicle expert and technology guru Miles said of the enforced end of the Canterbury trial:- "I'm not entirely surprised they've pulled the trial, there's so many videos of poor riding. I'd say they should be required to have something like a compulsory basic training as you do with a Moped - at least that's something. Maybe even enforce a dashcam to be fitted to each scooter, so should a rider be irresponsible they can be fined/prosecuted accordingly. This aside, putting my tin foil hat on I get the impression they were setup to fail. Given the geographic restrictions and issues around 'parking' I can't see it working in the current legal format. I still believe there's a place for scooters. It may simply be they are a zero-emission replacement for motorcycles and mopeds and must be licensed and insured accordingly. This would be a step towards removing some vehicles off the road". What do you think? Email me at hugh.neal@gmail.com. 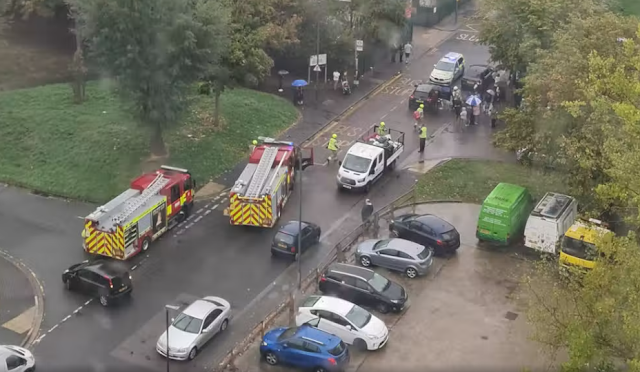 A recent story of an accident has been incorrectly reported in the regional press - specifically the London Evening Standard as having taken place in Erith. In reality the road traffic accident actually occurred in Thamesmead. A schoolboy was trapped for 40 minutes underneath a car after being struck on the school run in Thamesmead. The victim was hit on Alsike Road outside Parkway Primary School at 8.40 am on Friday. He was freed by firefighters and loaded onto a stretcher before being taken to hospital. The boy’s injuries were described “as not life-threatening”. The driver was not arrested, police said. Witness Daniel Stone said in an interview in the Standard: “He was under the car for around 40 minutes before they took him out. The paramedics and fire service pulled him from under the car. They were checking his condition before deciding to move him. He was between the front and rear wheel on the driver’s side, next to the rear wheel. The driver was very upset. She left the scene with some local residents shortly after the boy was taken to hospital.”

The end video this week features drone footage taken over the River Thames by Erith Yacht Club. Comments and other feedback as always to me at hugh.neal@gmail.com.