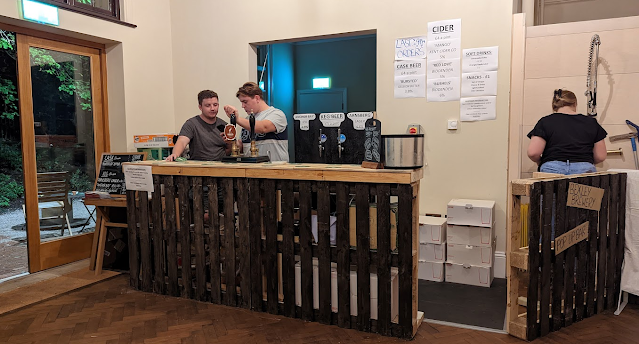 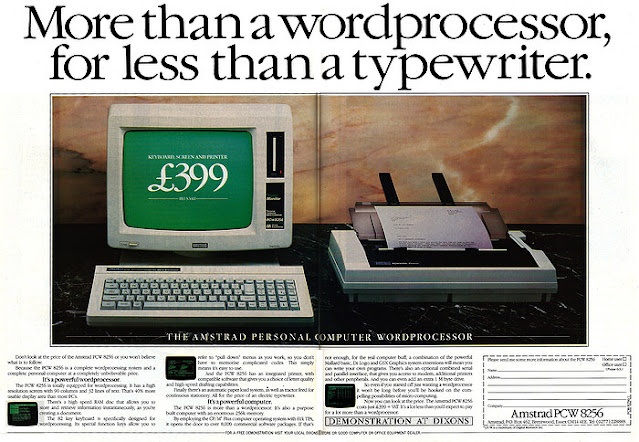 This week marks the 37th birthday of a distinctly low technology, unglamorous, yet hugely important and influential computer which most people who were around at the time will have forgotten about. The Amstrad PCW 8256 - in eighteen months it did for the typewriter what the car took thirty years to do for the pony and trap. Amstrad boss Alan Sugar’s specification was simple – “A word processor so simple Joyce could use it”. Joyce Caley was his formidable personal assistant, and "Joyce" became the codename for the project – and the product name in Germany. The PCW 8256 rode on the coat-tails of the previous Amstrad computers, which had been huge successes: The CPC 464 and 664 computers that I have written about in the past - two excellently engineered and very good value machines in themselves. While the PCW 8256 is often derided as being a low-tech device – Zilog Z80 - based, running CP/M when not word-processing and with a monochrome display – its key to being cheap lay in using a single chip which controlled the CPU, display and, crucially, the printer. What customers thought was a separate external printer was in fact just a printing mechanism with the electronics mounted inside the main unit. The PCW 8256 predated the widespread use of graphical interfaces and the computer mouse. Macs existed, but only in rarefied circles and its Motorola 68000 processor cost more than a whole PCW. Just being able to highlight text you wanted to cut and paste was revolutionary when most PC programs wanted a combination of control, secondary and tertiary keys for each step to mark the start of a block, the end of the block and the copy or cut. The PCW 8256 operating system / word processing program called LocoScript reduced nine key presses to three and made the whole process a lot more obvious. Whilst it could also play games - and indeed many Sinclair ZX Spectrum titles were ported onto the PCW 8256, word processing and spreadsheets were what it really did best. It was actually a superb bit of kit that was well engineered (down to a price) and very well thought out. Most of all, the long lasting effect of the PCW 8256 was to get people writing. If everyone back then had a book in them, it was often the PCW 8256 which got it out. Significant businesses can trace their roots back to early work on the machine. Many writers got their first books published after typing it out on a PCW 8256. Back in 1985, only a small, intrepid minority of writers used word processors. The pioneers tended to be sci-fi writers such as Isaac Asimov and Arthur C Clarke, who were perhaps naturally disposed to new technology, and authors of densely plotted thrillers and historical fiction who needed to incorporate lots of research and move material around without having to hold everything in their short-term memories. The Amstrad changed all this, for the simple reason that it cost £399, word-processing program and dot-matrix printer included, while an Apple Mac or IBM system cost four times as much or more. The PCW 8256 price lured in those writers who were beginning to realise that, on their Smith Coronas and Olivetti typewriters, they were spending as much time retyping as typing. A critical mass formed. any single piece of hardware can have been said to have introduced a computer to an audience it might well otherwise have bypassed, the Amstrad PCW 8256 is the machine - in the thirteen years it was in production in various guises, it sold a staggering eight million units. I suspect that in attics and the backs of cupboards all over the UK, some of these ground breaking computers still exist. Let's hope that they get preserved. 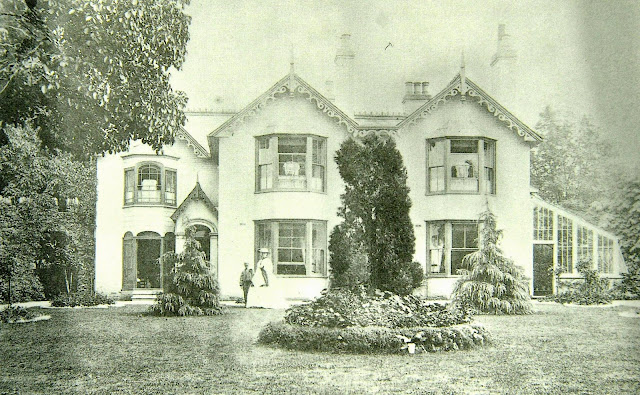 The photo above (click on it for a larger view) was taken back in 1880 of a very grand property which was called Walnut Tree House. It was owned by the Parish family, who by the looks of it were not short of a bob or two – the place looks lovely. The patriarch, John Parish owned the ballast wharf in West Street, and the ballast pit in what is now the Europa Industrial Estate in Fraser Road. The very fine quality loam dug from the pit was taken to the wharf to be loaded onto freighter ships for transportation up to the great iron and steel forges on Tyneside, where it was used to make moulds for metal castings. Unfortunately Walnut Tree House does not exist today; it was demolished to make way for Erith Town Hall in 1931. I don't know what the Parish family would have made of the location nowadays, with 24 hour motor traffic using the De Luci fish sculpture roundabout, it would definitely be very different from when the house was occupied.

Electric transportation and technology specialist Miles writes a guest piece this week on the current situation with increasing energy prices:- "Britain, unlike most of Europe, gets the majority of our electricity from natural gas fueled power stations. This for the electric car owner presents a problem. Unless you’ve been hiding under a rock the cost of this fuel has been impacted by the ongoing crisis in Ukraine and opportists from OPEC - sending prices for all sources of energy through the roof. As you are probably aware most if not all public EV chargers are owned by commercial entities. They, unlike residential consumers, do not enjoy the same ‘price cap’ meaning their energy costs have quite literally skyrocketed! You may have heard of small businesses and pubs worrying about their future viability as they watch their energy costs quadruple - I believe commercial rates breached £1 over the last fortnight. Clearly these costs must be passed on to the consumer, whether that be EV or ICE drivers. The price per kilowatt-hour at EV Rapid Charge stations has gone stratospheric at a cool 70p/kWh, quite a change from the days of ‘eat as much as you like’ free charging. Whilst the running costs are still cheaper than the Petrol equivalent (at a near eye-watering 170 pence a litre). When you consider the purchase price premium of an EV (circa £10,000 following a cursory look at MG.co.uk) it’s no longer the clear cut purchase decision it was just a year ago. The outlook of home charging is also looking increasingly bleak unfortunately. Previously you could take advantage of overnight ‘Economy-7’ (4.5p/kWh) which are significantly cheaper than day time rates. As more pressure is put on utility suppliers, it may be simply unviable to maintain these prices. In fact I was recently told my overnight rate will be near double come October (2022). When you factor in all the other cost of living price increases, it’s not good news. On a positive note the demand for solar power, battery and heat-pump technologies has surged over the last year. As energy prices continue to rise more and more homeowners are looking to reduce their utility bills. With solar becoming much more affordable, such installations have become a no-brainer which is great for the pocket and local business". What do you think? Email me at hugh.neal@gmail.com.

Now, as they say, for something completely different. Belvedere based digital artist and musician Ian has been working on a new project - a gentle and affectionate satire on the local area in the form of what initially appears to be a series of screen captures from an early 1980's home computer - in this case a Sinclair ZX Spectrum - the most popular home computer in the UK in the 80's. In a series of images originally from the video adventure game "The Hobbit" and the action game "3D Ant Attack" Ian tells a particularly interesting story, called "Arthur Pewty's write your own Blog". See what you think below:- 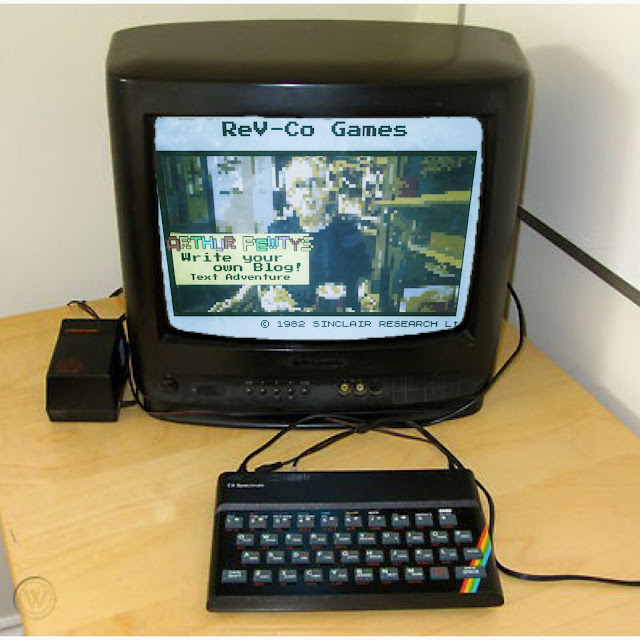 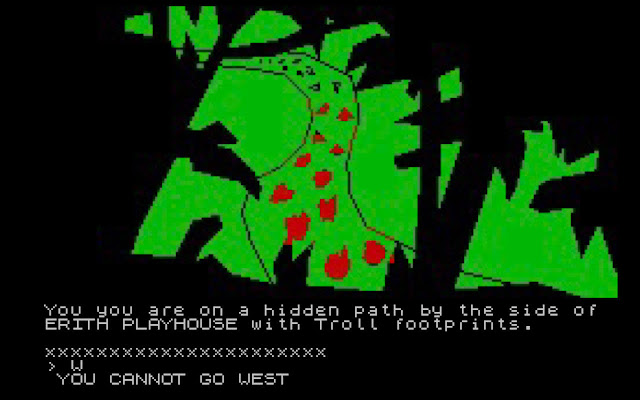 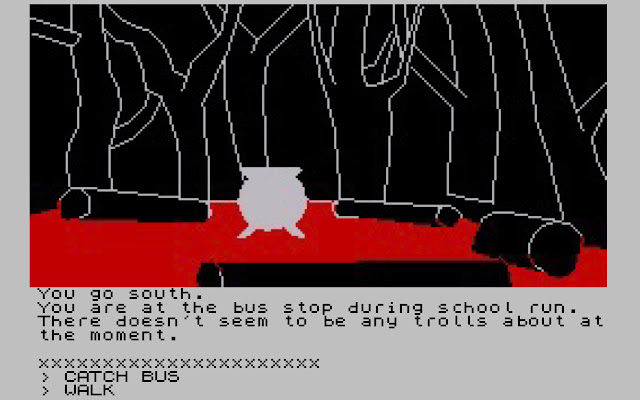 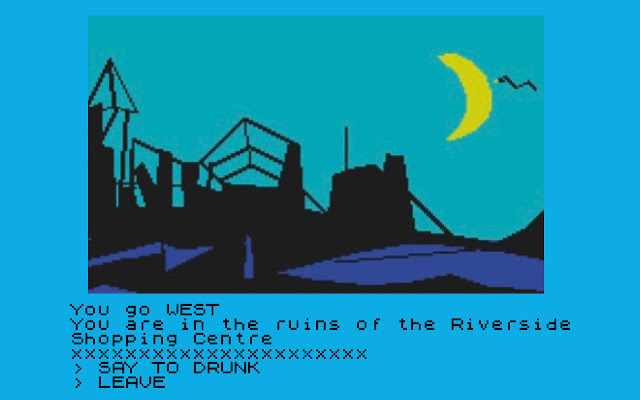 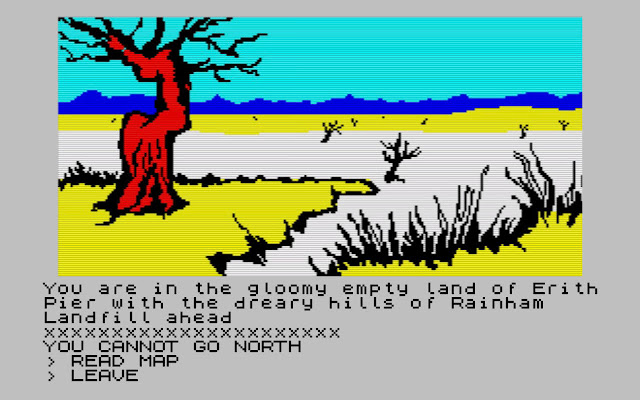 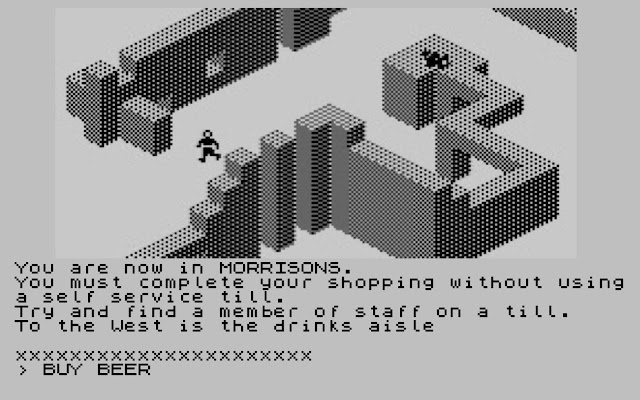 There has been much press coverage of the release of the Apple iPhone 14 in the press over the last few days. For some reason Apple products seem to get a lot more press attention than that given to manufacturers of rival products. My only real comment on the new device is to note that whilst most commentators have made much of the similarity to the previous iPhone 13. One old facility incorporated in the new iPhone 14 are stereo speakers, which are reported to be twice as loud as on earlier models. For me this is terrible news. Personally I think playing music on mobile phones in public should be a criminal offence. It is nearly always someone who looks like they would stab you if you complained to them. Why people do this rather than using headphones / Bluetooth ear buds is completely beyond me. The issue has even been discussed in the House of Lords. Back in 2006, The Piped Music and Showing of Television Programmes Bill was presented to Parliament, calling for "the wearing of headphones by persons listening to music in the public areas of hospitals and on public transport" to be made compulsory, although it never made it into law. The phenomenon has even been given a name – it is called “Sodcasting”. "Sodcast [noun]: Music, on a crowded bus, coming from the speaker on a mobile phone. Sodcasters are terrified of not being noticed, so they spray their audio wee around the place like tomcats." To say there is a backlash against "sodcasting", that it is felt to be antisocial, is a massive understatement. The fact that the music played is usually hip-hop or other forms of urban music, often seen as threatening by those who don't listen to that music,  exacerbates the sense, felt by many, that the very practice of sodcasting carries an implicit threat: "You don't want to mess with me." Indeed, back in 2006 a couple of thirty somethings from London launched a Music Free Buses campaign and a petition asking TfL (Transport for London) to ban the practice. "People think they can sit on a bus and blast music out, and when you ask them to turn it down you get abuse, especially from teenagers," they told their local newspaper. Around 4,500 people signed the petition, and in a poll carried out by the campaigners, 84 percent said under-18s caught playing music out loud should have their free travel revoked. Only 2 percent of respondents said they found the playing of music in public acceptable; the same proportion of those polled who were 18 or under. The message was clear: youngsters are the ones sodcasting, and adults despise it. TfL declined to ban it, though. Apple, by continuing to fit stereo speakers to the iPhone 14 are playing into the hands of sodcasters everywhere.
The end video this week is of local band Jigawatts playing at the Erith Made festival in the old Carnegie Library last weekend. Comments to me at hugh.neal@gmail.com.
Posted by Hugh at 12:15 pm