Direct sales people and a trip to Gravesend. 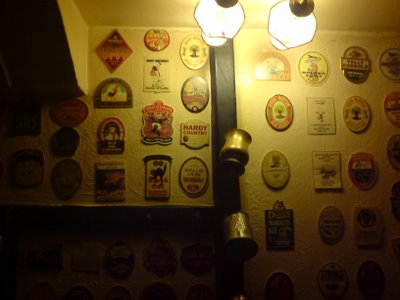 Ian and I spent a few pleasant hours down in Gravesend on Saturday evening; we originally turned out to visit the Gravesend Beer Festival, but it turned out to be in its' last throes. We really should have gone on the first day. Anyway, we went for a sojourn around the historic town centre, with its' amazing Georgian architecture. We then ended up in the Crown and Thistle pub (interior photo illustrated above) - many years ago when I worked for Radio Caroline, this was an extremely dubious spit and sawdust place, locally called the "Crown and Crumpet" due to the large numbers of ladies of negotiable virtue who frequented the establishment - very dodgy, especially to the young and impressionable person as I was at the time.

All changed for the better now; it is now a lovely pub that has a half dozen properly looked after and well presented real ales - and it won the CAMRA UK pub of the year award in 2003, and a civilised clientele to boot. Definitely worth a re-visit in the near future.

As you may know, I have been getting the train from London Bridge to Plumstead in the afternoons in order to visit my Dad in the Gallion's View nursing home; he is getting progressively worse and it is becoming increasingly harder for both the staff, and Julia, Mum and myself as his primary carers to look after him. Not fun in any case.

Don't forget that you can still visit my online photo album to see what else has been going on (apologies people in my company - the address is blocked on the network, you will have to look on a non company computer).

One thing I have noticed whilst commuting is the increased number of sales persons using the railway system. Over the last week I have encountered a number of direct sales people who think they can re - write the book over local orders - having mini morale boosting seminars in the middle of the carriage as I am quietly trying to read The Times. Small stuff I hope in the greater scheme of things. I will reserve my bile in respect of these cold calling sales people for another juncture, suffice to say that marketing can be defined as "forcing people to buy things they neither need or want". Ho hum.
Posted by Hugh at 9:31 pm