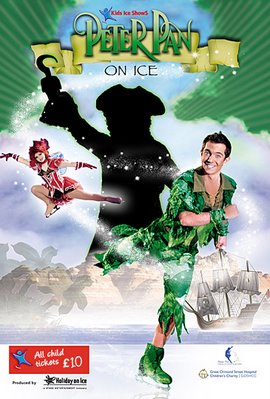 Peter Pan on ice. The full sized poster above is on display all around central London. Look at his rictus grin; a proto wannabe children's TV presenter desperate for his first big break into the media - his whole being focussed on selling his soul to become the next Philip Schofield. Grinning like a loon and gurning for a PhotoShop poster will not atone for his total moral degeneracy. These posters have been polluting public transport for the last couple of weeks. You have been warned.

Fake turbo dump valves on hair dryer engined, limp wristed Chav mobiles - Citroen Saxo type cars used by the local low lives that frequently grunt and fart when passing my house - but upon investigation, this is usually due to a sampled sound chip added to the car - you think you are hearing a (relatively) tuned engine, when in fact you are listening to a recording - as with everything else in their sad and empty lives, they need to lie to cover up their multiple inadequacies. Why spend a few hundred pounds (a big chunk of their benefit and drug money) on doing this? Why do Chavs wear "designer" track suits? They look like they are wearing over sized Baby Grows or romper suits - they look more ridiculous than ever. I would recommend pureeing them at birth if not sooner. Time to break out a fresh set of electrodes anyway.

My company has now implemented the new catering policy I talked about here has now been put in place - I had a very enjoyable chicken curry, bombay aloo, naan and pickles as a meal deal from Tiffin Bites who now operate every Wednesday from my companies' offices. All good stuff and I look forward to the other improvements in the quality of the catering. Just drop the drippy hippy waitresses with the smoothies - making spurious health claims for their totally scientifically unsubstantiated cups of dubious lurid coloured jollop.

Oh - and don't think I have in any way gone soft on on Mobile Telephones - check out my previous post on the invidious subject here.