Feet on seats and boiling blood. 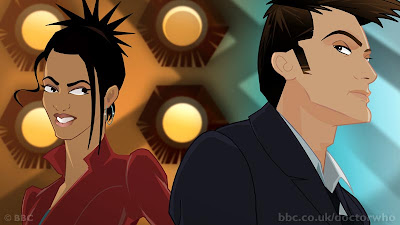 I have heard it said on several occasions that you only know for certain that you are truly famous when an action figure of you is brought out. Well Freema Agyeman has hit the spot running - she is playing the Doctor's new companion, Martha Jones. Even before the first live action episode featuring her is transmitted, she is already a cartoon character. The still shot above is from the forthcoming Doctor Who animated adventures, which will be shown on CBBC 1 on week day afternoons. Freema is a distant cousin of Shirley, so I get my five minutes of fame by association! No doubt the action figure will follow before long.

I know I have mentioned this before, but the recent spate of icy weather has thrown the whole situation into sharp relief. The seats on the trains to and from London are frequently filthy due to the selfish and inconsiderate actions of a particular section of society - namely the lower classes, many of whom are manual labourers. Salt and grit from the icy pavements gets smeared onto the seat opposite the one they are sitting on when they put their feet on the seats. I feel that instant summary knee capping is the only viable solution to the scumbags that put their feet on any seats on public transport - what gives them the right?

I have just Emailed Sky One to ask them if they have purchased the remastered 1080i high definition classic Star Trek series that has been so well received in the U.S - I did touch on the subject here some time ago, but just as a reminder, here is an explanatory trailer. I can't wait.