A fine lunch and the tunnel of doom. 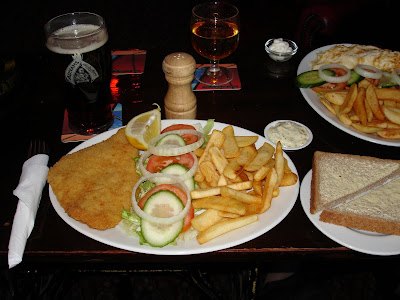 Mum and I went for lunch at the excellent Robin Hood and Little John pub in Lion Road, Bexleyheath today. It has now won the CAMRA "Best pub in Bexley" award SEVEN times running, and the "Best pub in Greater London" twice. The food is proper, fresh home cooked fare - not poncy Gastro Pub nonsense. As you can see, I had a fillet of plaice with chips and salad, washed down by a couple of pints of expertly served Adnam's Broadside - my favourite real ale at the moment. Mum had a filled omelette and a similar salad also with home made chips. Click on the photo above for a far larger version. What looks like a wine glass in the background is actually Mum's half pint of Black Eagle Special Pale Ale from the local Westerham Brewery.

You may recall that some time ago I had a bit of a whinge about the new Fish Statue that greets unwary travellers as they enter Erith. Well, in a way, insult has now been added to injury. There is a foot tunnel which connects Erith town centre with Erith railway station. The aforesaid tunnel runs directly beneath the hideous statue; its' walls are smothered in graffiti from the local Chavs and other single celled low lives, I have on many occasions seen rats scuttling though it to the wasteland where the old tram station once stood. The tunnel used to have security cameras, but they were soon seen off by the indigenous knuckle draggers. In the last week, all the fluorescent lights have been smashed and the resulting broken glass strewn around the tunnel. Along with a large number of commuters, I have to use this tunnel to get to the station on my way to work in the mornings whilst it is still dark. I am nervous of using it as it is a mugger's paradise - so how must others feel? Bexley Council spent £60,000 on the hideous statue, yet they have not done anything about the horrendous state of the foot tunnel in a week. Money mis-spent is all I can think. Please leave your comments - click on the "Comments" link at the foot of this posting.

Don't forget to check my Flickr photo album. I will be uploading some new photos over the weekend.

I have actually posted a link to the following video before, but it was quite a long time ago, and I don't think many readers actually saw it. The mini movie is in French with subtitles - but please don't let that put you off. It is a short comedy about four friends who get together after a gap of fifteen years to play a game of Dungeons and Dragons - VERY funny in a Kevin Smith kind of way. See what you think: