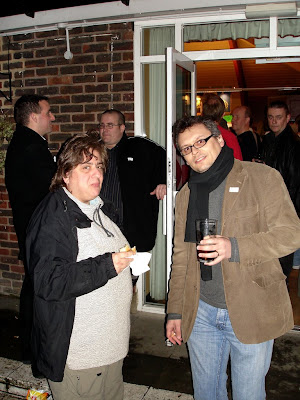 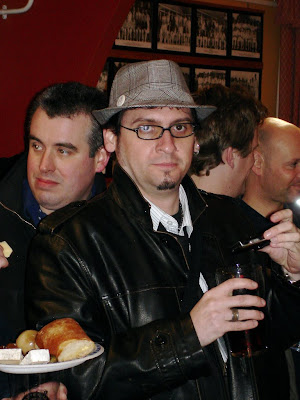 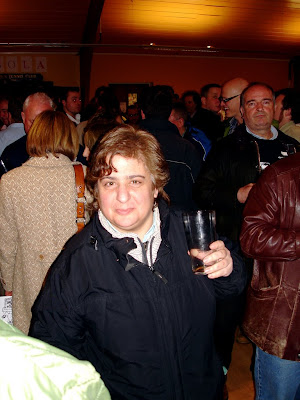 A happier blog posting for the most part this week; Work colleague and friend Martha accompanied me to the Robin Hood and Little John for lunch on Friday, and then on to meet Ian, his cousin Joe and Alan at the Sidcup Rugby Club for the third annual Bexley CAMRA real ale festival. The festival has, I think this year become a victim of its' own success; my guesstimate is that it has grown in popularity by about 33% each year, to the point at which I think it has now outgrown the venue. It was rather overcrowded and slightly uncomfortable. The fact is was wet and absolutely freezing cold outside did not help matters in the slightest. A good and friendly crowd of people, over sixty premium real ales and ciders, and some high quality home cooked food made it all worthwhile. The grotty and unseasonal weather could not cast a damper on proceedings.

A bonus was meeting up with the excellent chaps from local pirate radio station WNKR - who have been heavily promoting the event on the station for the last few weeks. I have honoured their wishes for anonymity by not publishing any photos of them online here - you also won't find them on my Flickr photo site either. We also met a former Radio Lumberjack fan and anorak from Old Bexley who remembers more about both me and my radio shows on the station than I do! I did not realise exactly how much I had forgotten - after all, he was recalling events of over twenty years ago.

Another radio enterprise with which I had a small involvement was the original special event radio station Offshore Radio from back in 1992 - you can watch vintage (and slightly wonky) coverage from Sky News - and look out for a younger Captain Alex from last weeks' Blog posting in the footage...

No real word of how the M.V Galexy was pivotal in the supply of Radio Caroline (okay, a small passing mention) and nothing about its' role as a prime location in the seminal British Gangster movie "Get Carter" - but not too bad all things considered.

I recently whinged about the pitiful state of the rebuilding of Erith Town Centre, and its' part in the Thames Gateway regeneration scheme. It would appear that my misgivings are not alone; Lord Richard Rogers has said the same thing, only somewhat more eloquently - you can read his thoughts here.

Here is a trailer for the new series of Doctor Who, which starts at 6.20pm next Saturday.