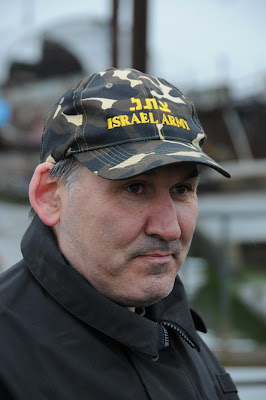 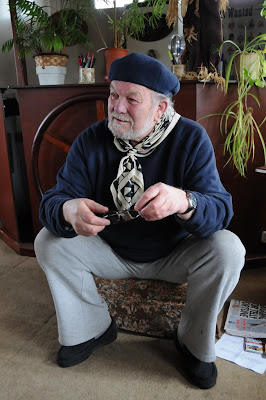 What a horrible Bank Holiday; I cannot recall ever having such dreadful weather over the Easter break. It has meant that for a substantial portion of the time I have been cooped up indoors to avoid the sleet and snow, listening to WNKR's superb extended holiday broadcasting - interrupted only when the car battery that powered their transmitter froze up! All now back up and working as I type this though.

On Sunday afternoon I accompanied Colin (top photo) down to the boat yard at Hoo, where the Admiral Jellicoe is moored. As previously mentioned it is up for sale on Ebay. I had planned to take some photos on board to add to the ones Colin already has; unfortunately the tide and wind were against us and it would have been to hazardous to climb on board. I grabbed a few exterior photos and took a few views of the yard itself. The weather was nasty - driving sleety rain, so Colin and I headed back to his van. As we made our way back along the slippery and hazardous companion way I noticed a figure standing in the doorway of the yards' offices (actually two Portacabins stacked one on top of the other). The person had a pair of binoculars and was studying Colin and I intently. I returned the compliment by cranking up the zoom on my 18-200mm lens and photographing the person. It was the boatyard owners' wife. We got back in the van and drove towards the exit, when the owner and his wife stormed out of the office and stood in front of the van - and I can honestly say I have never seen people so angry. Mister W, the boat yard owner was ranting and swearing "Who gave you permission to film here?" was the main theme, but he screamed, ranted and was actually foaming at the mouth - astonishing - I thought he was about to have a heart attack - the venom, bile and language were so extreme I thought he was about to physically attack us. Colin (a 5th Dan Kung Fu Black Belt) told him where he could get off, and we drove away. There is a long story behind this which I cannot currently recount, as several court cases involving Mister W versus Regina are pending. Suffice to say that the cases include, but are not limited to, accusations of the possession of unlicenced firearms and ammunition, theft of electricity, VAT fraud, benefit fraud, fuel excise duty fraud, Health and Safety regulation violation and environmental pollution. It is my personal opinion that Mister W is a thoroughly nasty piece of work and I look forward eagerly to when I can tell you the whole story - and that will be after the litany of legal cases has been held, and Mister W is securely locked behind bars.

We parked the van a hundred or so metres from the yard entrance and returned on foot to visit Captain Alex (the lower photograph) on board the M.V Galexy - a very old friend and one time acting second Dad to me. He used to be one of the main people behind the scenes, running the Radio Caroline shore - side supply chain. He is an old fashioned salty sea dog with an endless number of elaborate stories - some of which sound very far fetched - but are actually true (I know, I was part of many of them). His nick name used to be Captain Birdseye - you can see the resemblance! We stopped by for a cup of tea and a chat - he too has suffered from the activities that Mister W has "allegedly" been carrying out.

You can view the other photographs I took yesterday, along with my other albums of photos by visiting my Flickr website. Sorry work colleagues, this URL is blocked by the company filtering system - you will have to have a look from home.

On a lighter note, Colin is actually a Lord. he does not use his title in everyday business, but he even has the document to prove his noble provenance. It might open a door or two - you never know.

Anyway, just to round up for now, here is a video clip from a recent Space Shuttle visit to the International Space Station - amazing stuff.