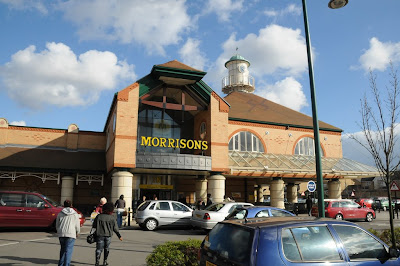 I was in my local Morrison's supermarket on my way home from work; I had picked up a hand basket along with a pair of smoked Haddock fish cakes I intended for my supper this evening. I was walking in a leisurely fashion past the self service salad bar when I heard a commotion slightly behind me - I half turned to encounter a scrawny middle aged and raddled Chav screaming, swearing and gesticulating at an elderly, respectable looking couple who were using the salad bar. Thinking little of this, I made to go on my way when the feckless Chav picked up the nearby container full of Coleslaw and then threw it directly at me!

My brand new, brown herringbone tweed jacket took the brunt of the assault down my left side and arm - immediately I remonstrated, and the festering scrote then charged past me and further into the store. My immediate thoughts were "I have to be careful as this will be on CCTV" so I did not visit vengeance on him via my trusty "Plus Three boots of steel toecapped kickingness" (it helps if you understand Dungeons & Dragons, but I do wear such boots on a regular basis). instead I quickly contacted security and the store's deputy manager.

Once I had done this, An impressive security operation rolled into work. Security guards with the offender's description were placed at the two building exits; the assistant manager contacted a group of half a dozen of the burliest blokes in the store's employ and formed them into what I can only describe as a posse and then deployed them with me as posse leader to hunt down the offender. Unfortunately, despite all of our best efforts we were unable to locate the festering pustule of alleged humanity and after half an hour we had to abandon the chase. it would appear that he must have exited the store immediately after the encounter.

Had we found the scumbag, I would have been more than willing to press charges to the fullest extent of the law - up to and including having him gassed until he stopped twitching. Bastard.
Posted by Hugh at 9:11 pm