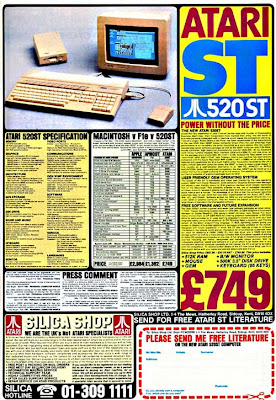 Whilst trawling around the dustier nooks and crannies of the Interweb this morning, I came across the picture above - a scan of a mid eighties advertising flyer from Silica Shop - the place where I first cut my computing teeth with a Saturday job whilst still at school. I worked in both their head office which was located in Hatherley Road, Sidcup, and later in their Tottenham Court Road showroom. As well as selling home computers, I was taught basic system administration on the companies' massive (for the time) DEC PDP 11/44 mini computer (oh those huge and unwieldy 8" floppies!) The 11/44 could not reformat its' own disks for re-use; we had a very unreliable electromagnetic disk bulk eraser, but when it packed up, as it did with tedious regularity, I would put a pile of used floppies under an old fashioned rotary dial phone then ring the phones' extension number - the electro magnet in the ringer would then wipe the disks ready for later re-use. Magic.

I found another Blogger with Silica Shop memories - you can read his thoughts here.

I hate to grumble (actually, no that is rubbish - I love it!) I am not a fan of the hot weather; anything over 22 degrees Celsius and I stop working - not fun. I am one of those people who go from a pasty white corpse - like complexion to horribly burned without going through the tanned bit in the middle. I just slap on the sun block, or better still stay indoors until the sun goes away. Still my new high end iMac is due for delivery in the very near future; I doubt I will be going out at all once I have it up and running.

The TV advert below dates back to 1983; it features the very first production desktop computer to have a graphic user interface (GUI) (Okay there was the Xerox Star, but no-one other than geeks like myself have heard of it). It predates the Macintosh by a good eighteen months and in many ways was far superior to the early Macs. It was called the Apple Lisa and it cost a whopping $10,000 - no wonder it did not sell very well! A real ground breaking piece of kit; I remember seeing one in a computer store just off New Oxford Street in London, and then getting escorted off the premises by the security guard when I had a sneaky go on it - remember this was literally years before Microsoft came out with their derivative Windows desktop - all other computers used obscure and arcane command line instructions - there were no user friendly graphics to make things easy, just an intimidating blinking cursor on an otherwise empty screen. Anyway, I was only trying to find out if it played asteroids! It didn't, but I did manage to print out my name on a laser printer (another Apple first) before my untimely eviction.

Take a look at the "businessman" in the advert - recognise him?