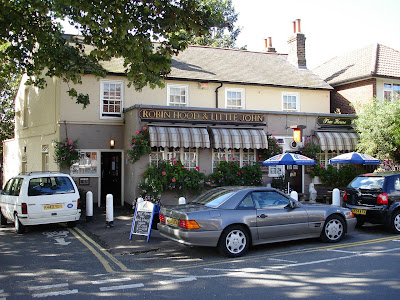 Well, after the recent Blogger dodgy HTML shenanigans, here is my original posting again, slightly updated under the circumstances...

A different kind of Blog entry this week, just for a change. I am writing this “live”, sitting in the Robin Hood and Little John – a pub that I have mentioned and photographed here on many occasions in the past. I am sitting at my normal small corner table watching the world go by. The world as seen by the RH&LJ is a nicer, more civilised place where Chavs, casual violence and low level hatred don't exist. It shows how things should be, but not how they actually are. The pub has won the CAMRA Greater London pub of the year twice and the Borough of Bexley pub of the year for the last eight years running! The landlord Ray runs a very tight ship and does not permit the local knuckle draggers entrance; they serve eight different real ales and a couple of quality ciders, all kept in superb condition, and proper pub food where everything is cooked to order and nothing comes via a microwave oven. Nice indeed. I took friend and work colleague Martha here a few weeks ago – she's a fellow CAMRA member and has not stopped praising the place ever since.

I am drinking a cool pint of British Bulldog bitter from the Westerham Brewery in Kent – a beer brewed especially for Sir Winston Churchill during his lifetime, and now kept on in his memory. Light, aromatic and refreshing, it is a long way from the stereotypical cloudy and heavy real ale supped by blokes with beer guts, beards and open toed sandals of yore. I wish that I had brought along one of my excellent Nikon cameras to record the scene.

The clientele of the pub tends to be a little older and better heeled than those in a typical Bexleyheath hostelry. Drinks are not cheap, but quality and service cost, and I for one do not mind paying and apparently neither do the large number of regular customers.

An older chap is propping up the bar, waiting for his wife – he's a regular and is atypical in that he is drinking Chardonnay rather than beer. There's a guy sitting at the far corner of the bar, completely absorbed as he completes the crossword in today's “Le Monde”. All very civilised.

I have got my herringbone tweed jacket back from the dry cleaners now – back to serviceability after the recent coleslaw incident at Morrison's – something that still rankles with me. Thankfully it is back to full use with no hint of what had occurred. Just as well as I had only worn it on two occasions and it is a nice piece of apparel.

On another note, I watched a very interesting documentary last night on the re-invention of McDonald's and the way in which the fast food giant has clawed its' way back to the top of the mass market catering tree using some very clever and inventive marketing techniques. I am hardly the target for McDonald's, but I have to admire their efforts. I am more of a Subway person myself – again not cheap, but the food is fresh, tasty and pretty healthy, all things considered.

I have now placed my order for a new quad core processor 24” wide screen Apple iMac computer for delivery next week; I have had a couple of Emails and personal phone calls from Apple's European HQ in Ireland and have agreed to purchase a very high end specification machine with a terabyte of internal hard disk capacity, along with a backup system with a terabyte of external storage, also with some studio reference quality monitor speakers. I suspect that next week's Blog update will probably feature the new beast, and the decommissioning of the trusty old G4 iMac that has served so trustfully for the last three years. The old machine will be going to a good home; it is going into semi retirement with Ian, to sit alongside his Windows PC and as a Mac neophyte he will undoubtedly learn a lot from it.

The pub is getting busier now, and the chap nursing the Chardonnay is holding forth about the London Mayoral elections – his observations seem certainly more entertaining than most of those espoused on the television over the last couple of weeks. Time for me to order my lunch I think...