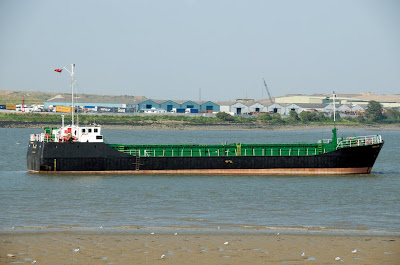 A photo of a coaster off Erith a couple of days ago - click on it for a larger version. There is a surprising level of commercial activity on the River Thames; much of which passes behind my house. There have been rumours of a river bus service to and from London stopping off at Erith Pier, but so far it has been all talk and no action. It would be an excellent way for me to get into London; when in the capital I am usually based in an office close to Blackfriars Pier; it could be a pleasant way to commute. Come on Boris - earn your hefty pay cheque!

Local free radio station WNKR broadcast on 1476 kHz medium wave to London and the South East; they also have an internet stream which you can listen to here. They always have unusual and interesting programming - give them a listen.

As many of you know, I have been banging on about mobile phones and the potential health risk the things pose for a considerable time. There has been recent impartial (ie: not sponsored by a phone company) research by the University of Pittsburgh Cancer Institute in relation to this very issue; their findings will be very worrying for any hardcore mobile phone user - you can read the summary and recommendations and decide for yourself. Personally I will never use or own a mobile telephone. I have had a number of people saying "Won't you get the Apple 3G iPhone?" The answer is no. Subject closed.

Incidentally, I don't know if I'm the only one who has noticed, but the recent ban on drinking alcohol on public transport has had about much effect on anti social behaviour as the ban on mobile phone use by drivers, and the ban on smoking on railway platforms. In other words, none at all. I still see shaven headed, bare chested Neanderthals guzzling cans of Stella Artois (why is it always Stella?) on the train from London - and the scrotes usually have their filthy feet on the seats as well. I welcome the apparent influx of British Transport Police who are to patrol trains on a more regular basis - as long as they have teeth and deal with the drinkers and the fare dodgers - often one and the same. Automatic tasering of anyone without a shirt or t-shirt in public would be a move forward too; the horrid sight of pasty (or otherwise sun burned) Chav skin, usually accompanied by a swathe of tattoos is really just too much for a civilised person to have to deal with. There is a tattoo shop in Erith town centre that even has the temerity to offer gift vouchers! I wish I was making it up.

You may have seen an article on the BBC News website regarding Calvin Prior, a 13 year old rock guitar prodigy, who is currently earning an average of £70 per hour by busking on Brighton sea front during the summer holiday. I unearthed another video of him from YouTube, which you can see below. He's really rather good you know...
Posted by Hugh at 5:02 pm