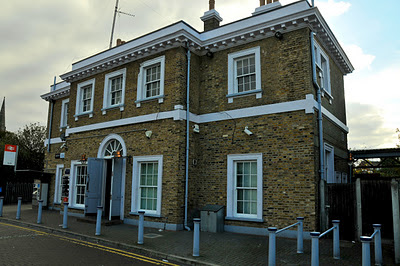 Erith Railway Station is subject to yet more controversy. Erith and Thamesmead MP Teresa Pearce is running a campaign to prevent the closure of the ticket office at Erith Station, and to stop opening hours at Thamesmead station from being reduced. Southeast trains are trying to do away with the staffed ticket offices at Belvedere, Erith and Slade Green stations, and to reduce opening hours at Albany Park, Bexley, Abbey Wood, Crayford and Falconwood. I utterly fail to understand the reasoning behind the threatened closures – the ticket machines are very limited on what they offer – you cannot buy extension tickets or monthly (or longer) season tickets, and the Southeast trains website is little help. If a passenger needs to ask for information or advice they will in future be scuppered. To top this all off, Darryl of the excellent Charlton based 853 blog has discovered that during the period leading up to, during and after the Olympic Games next year, that local train services are going to be severely disrupted – some rail stations such as Woolwich Dockyard are going to be completely closed for the duration of the event, and travellers will not be issued with any form of compensation. You can read about the potential breakdown in public transport provision by clicking here.

We are still suffering from short trains; the promise of eight carriage trains are still not being undertaken By Southeastern Trains, and the drastically reduced timetable for the Olympics can be seen by clicking here.

After the mention last week, I have been in contact with Bexleyheath based Talking Elephant Records, and following recent discussions, I hope to be in a position to publish an interview / article on the local company within the next couple of weeks. I will keep you posted. 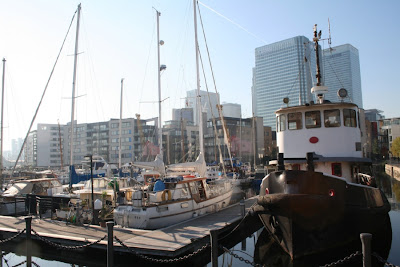 I spend much of my working time based in a rather swish office building in Canary Wharf. Most people working in the wharf will visit the underground shopping centre, and maybe sit in one of the parks in the area if the weather is clement, but they don’t venture anywhere else. Now that my dodgy right foot is well on the way to healing, I am starting a walking exploration of East London. So far I have discovered the Poplar Dock Marina (see the photo above), which although it occupies one of the outer shipping docks in the Canary Wharf complex, feels like it is miles away. The marina is home to many house boats, and has a very relaxed “out of town” feel to it. On Thursday I ventured across the A13 and the tracks via the footbridge to Poplar DLR station. I then strolled into Poplar High Street. This is only about ten minutes walk from Canary Wharf, but a whole different world. A mix of quite deprived council accommodation and some lovely Georgian houses that are now becoming gentrified, by the look of the cars parked outside. I visited Chrisp Street Market, and the Lansbury Estate shopping centre – the oldest pedestrianised shopping centre in the UK, dating back to the Festival of Britain in 1951.  There are a couple of traditional pie and mash shops in the centre, including a very nice looking place called Maureens, that specialises in both traditional pie and mash, along with hand made hot salt beef sandwiches. There are  also quite a few Halal food places too. I was quite surprised at how nice the area is – I was expecting something like Plumstead High Street (a 7.5 out of 10 on my personal roughness scale) and instead got something rating about a 5 out of 10. Quite a lot of the buildings have been restored, and I noticed a remarkable lack of graffiti for what is still all said and done a rather deprived area. It is certainly somewhere I shall be exploring in greater detail in the near future.

I was standing on the concourse at Euston Station early on Wednesday morning. Looking up at the departures display board, I did not see a slightly dishevelled figure approaching me at speed. He bumped into me and then grunted – I then realised it was writer and comedian Rory McGrath. He was spectacularly grumpy, and close up his face resembled a dropped pie; nowadays he’s got more chins that the Hong Kong telephone directory. Suffice to say I did not get an apology.

Erith is the only place on the entire River Thames that has a licenced, professional Eel fisherman. News reaches me that recent surveys of the health of the river indicate that the native eel population is shrinking rapidly - which is extremely worrying, considering the minimal level of eel fishing nowadays carried out on the river. Water and air pollution levels are down markedly when compared to the 1930's and earlier; I really have no idea why the number of eels found in the Thames should be so much reduced. Any information would be gratefully received.

News reaches me that the redevelopment of the Tesco supermarket in Dartford is pretty much a foregone conclusion; you can read all about it here. 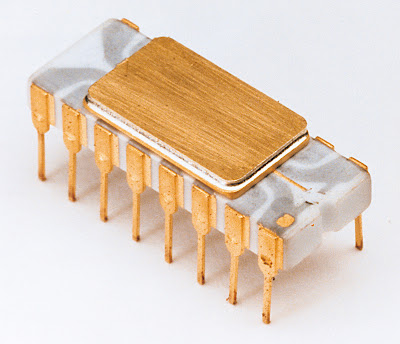 As previously mentioned, there are rather a lot of technology anniversaries cropping up at the moment; this week it is a biggie - the 40th birthday of the Intel 4004 microprocessor - the first widely available mass produced "computer on a chip". Nit pickers may say that there were earlier microprocessors - and indeed there were, but they were not widely available, and the 4004 was the chip that laid the path towards the later Z80, 6502 and 68000 processors - all of which fuelled and ran the home computer revolution in the 1980's. Click here for more details.

We need to fear for the future of the Indian restaurant; Conservative MP Eric Pickles (a man who looks like he is somewhat familiar with the inside of a curry house or three) has suggested that there should be a "Curry College" to teach unemployed British youths how to cook, serve customers and manage Indian restaurants. All this is intended to replace staff who in the past have been brought in from the Indian sub continent (usually Bangladesh / Pakistan). I am somewhat sceptical of this approach; whilst in principle I agree that anyone should be able to work in the hospitality business, and with the right support and training anybody should be able to cook and serve a decent quality curry, I just don't see the desire to do this amongst most young people. The reason staff for curry houses come from Asia is because they need to earn money to send home to their families - most get paid way under the national minimum wage, don't pay tax or national insurance, and to all intents and purposes don't feature on the radar of the welfare state. As soon as you start employing staff who fulfill all of the legal criteria, the overhead costs are going to go through the roof - all of which will of course be passed on to the customer. 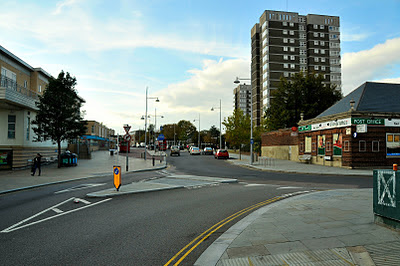 Over the last few months, I have picked up a great many new readers - I am now only a few hits short of 60,000 unique page views; I think it is probably a good time to explain a bit about the Maggot Sandwich to those recent participants. If this is the first time you have read my Blog, then I should explain; I chronicle events in and around Erith and the local area, and cast my wry opinion on issues such as petty crime and social injustice; my views and comments are often made in a slightly tongue in cheek manner, and whilst everything I report on the trusty Maggot Sandwich has occurred exactly as I write, any opinions expressed are to be taken lightly. When in petty local crime fighting mode, I have an alter ego - the suitably monickered Captain Tweed. You can read about one case I cracked by clicking here to go to the story. I have been posting weekly articles here for over six years now - there are now in excess of 357 posts; updates are published regularly on Sunday afternoons / early evenings, and an Email is sent out to inform veteran readers. The five most recent postings are on the front page, older postings are automatically archived, and can be read by clicking on the "Blog Archive" drop down menu button to the right of the editorial. Also on the right are a series of links to other websites you may find of interest. The list updates whenever one of the linked sites posts any new content, so the links at the top of the list are those with the most recent updates - the lower on the list, the older the content - all clever stuff.

Here is an Easter Egg.


Scientists and engineers have come up with the world's first proper holographic 3D display - without using "cheating" techniques, such as using high speed spinning glass screen to reflect the projected image.  This is the first real step towards the kind of holographic projection system seen in the Star Wars movies. You can see a video demonstration of the system below; it is obviously in an early stage of development, but the potential is clearly obvious. Watch the compelling video below and do leave a comment with your thoughts.

After perusing the local history books further more over the last week, I discovered that Erith features rather heavily in the early history of the steam railway. The North Kent Railway, including Erith Station, was opened on the 30th July 1849. The architect for the buildings on the line, including the extended terminus at London Bridge was Samuel Beazley. Erith Station is a prime example of his work. Abbey Wood station also opened in 1849, whilst the stations at Plumstead and Belvedere followed in 1859. The arrival of the railway helped the raid increase in Erith's population, which rose from 2,082 to 8,289 in 1871, and greatly facilitated local industrial development. Despite the growth, Erith remained beyond the limits of the London suburban build up area; for many years, Plumstead was the outer limit for most continuous building. In the 1860's, out of 34 daily weekly down trains on the North Kent line, only 15 went beyond Plumstead; this proportion only increased gradually during the remainder of the century. When the Bexleyheath railway opened, some trains ran by this route via Slade Green.

The Army has a really interesting and informal website called the ARRSE resource - it is a bit like the MumsNet site - completely unofficial, yet authoritative and up to date. I have been reading articles on the website, and it is definitely an eye opener. You can see the site by clicking here.

A sporting activity made popular with the association with Erith was the sailing barge races; they were started in 1871 by Henry Dodd, a Londoner who moved into Erith in 1871; he made a fortune from refuse, and was known locally as the "Golden Dustman". Barge races became an annual event, though weather conditions sometimes prevented completion of the full course. The 1893 race was the last one completed from Erith - later races were run from Gravesend. 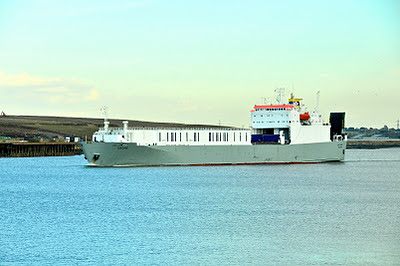 Someone has started a website that parodies the current trend for celebrity chef run sites that promote expensive, high end cuisine - the Shite Food website reviews low priced, low quality convenience food to expose really how shockingly bad much of the stuff available to the lowly paid is actually like - and the results are not good. You can see the end results by clicking here.

The closing video is a bit of a minor classic. It is the "I like trucking" song from "Not the Nine O Clock News". I recall this was extremely controversial at the time - many people complained about the hedgehog which gets run over at the start of the video. I think people were a lot more naive then; nowadays the general public are far more knowledgeable about television and film production and know "it's not all real" - whereas then, in the early 1980's most people took what they saw on the screen as verbatim.