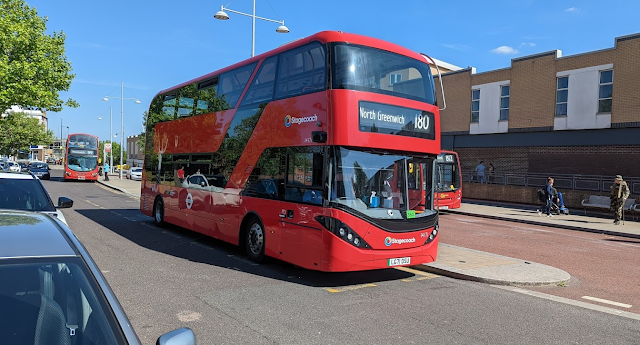 I took the photo above - click on it for larger version - yesterday in Erith Town Centre. It shows one of the very first 180 buses running on the new route to link the Erith Quarry residential development with North Greenwich. This will allow residents to use the Elizabeth line from Abbey Wood when that opens in a couple of weeks. The 180 route is quite an old one and has existed in one form or another since October 1951 where it used to run between Plumstead and Lewisham, which was later extended to Lower Sydenham. Since then it has had many changes in route. The latest of which took place yesterday morning. Although the route description says that it starts from Erith Quarry and Fraser Road; in reality, it would appear that it is actually starting from the island bus stops used by the 99 and the 229 buses in Erith Town Centre. This is one of the most significant changes in a local bus route for at least a decade. The new route suns as follows:- Erith Quarry Fraser Road > Erith Town Centre > Erith Station > Yarnton Way > Abbey Wood > McLeod Road > Plumstead High Street  > Plumstead Station > Plumstead Road (For Elizabeth Line) > Woolwich Town Centre (For Woolwich Arsenal station - DLR & National Rail > Woolwich Ferry > Woolwich Road > Charlton > Millennium Village > North Greenwich Station. The 180 bus service fulfils a real need for the local area; as I have written in the past, there was a very short-lived and unsuccessful attempt at a private bus service running between Erith Quarry and Abbey Wood station. It was inaccurately called The Nuxley Navigator, which was partly sponsored by Ford. This service was launched in 2018; at the time they were virtually no residents living in Erith Quarry, and in any case few people from Erith wanted to use Abbey Wood station at the time. The Nuxley Navigator folded very quickly, never having really established a user base. It only ran from Monday to Friday during commuting hours, and it was substantially more expensive than using the bus. I feel that the re-routed 180 service is a far more practical and sustainable public transport solution. What do you think? Email me at hugh.neal@gmail.com. 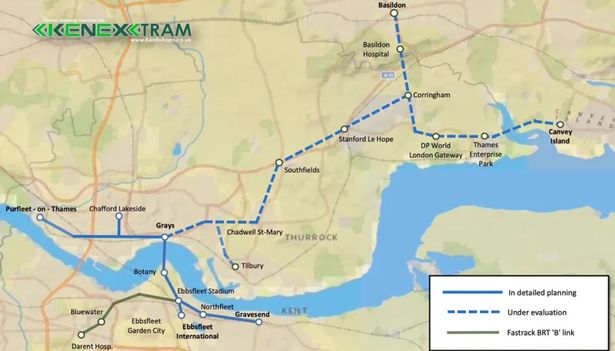 As residents of Erith, Slade Green and Crayford will be painfully aware, there are certain times when local roads get incredibly congested with traffic heading either to or from the Dartford River Crossing. Certain roads such as Queen's Road by the De Luci fish roundabout, Manor Road and North End Road seem to suffer especially badly at certain times - for some reason Friday tends to be the day with the greatest congestion. The Dartford Crossing currently connects the two South East counties of Kent and Essex, but the M25, A282 and local roads are often backlogged with lines of traffic. However, there is a proposal for a revolutionary network that is estimated to wipe around 10 per cent of traffic off the roads while also improving the air quality in the region. This tentative proposal is for new tram network between Kent and Essex. The project, named KenEx, is aiming to provide a "sustainable public transport infrastructure" between the two counties. The proposals include a 1.2km submerged tunnel built under the Thames, enabling the connection between the north of Kent and south of Essex. A detailed map above shows a number of transport hubs across the two counties that could get their own tram station as part of the project, including Ebbsfleet International, Gravesend, Grays and Purfleet-on-Thames. The aim is to create an "integrated and enhanced local economy", which organisers say has never been enjoyed before by the communities on either side of the river. The project is expected to cost £800m, according to Thames Gateway Tramlink Ltd, which is just 10 per cent of the overall cost of the Lower Thames Crossing proposals. The proposed submerged tunnel under the River Thames would use the same technology that was successfully employed to create the Medway Tunnel, albeit on a somewhat larger scale. Tram travel is widely viewed as a suitable solution to local needs, with local councils and businesses said to be supporting the ambitious project. Immersed tunnel specialists COWI have already visited the site, and said in an article published on the Kent Live website: "We consider that the proposal has great merit and is certainly feasible."Official designs and proposals are "not due for some time", but anyone interested in the project can find out more by clicking here. Organisers say they are keen to hear feedback from locals in order to ensure they can cater to their needs. Personally I would like to see the Kent side be extended to mirror the greater number of stations on the Essex side of the river in the proposal. I feel that the tram system should also cover Dartford, Crayford, Slade Green, Erith and Lower Belvedere. What do you think? As always, you can contact me by Email at hugh.neal@gmail.com. 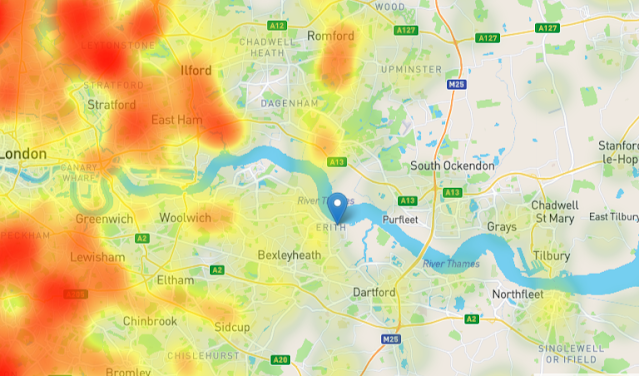 Following my article last week on poisonous Giant Hogweed plants that can be found in the local area; another plant which can cause harm has come to light. Japanese Knotweed is not poisonous, but it can cause extensive damage. Environet UK has revealed the Japanese Knotweed hotspots for spring 2022 by using data from its online tracker heatmap, which is produced from reports of the weed verified by experts. The map shows data from 2019 - when it was launched -  to the current day, and allows users to enter their postcode to discover nearby sightings.  Click here to see the map and input your postcode. In my case there are eighteen reports of Japanese Knotweed within 4Km of my home address. Japanese Knotweed is a non – indigenous, invasive plant that grows prodigiously and can damage the foundations of buildings; it is very difficult to eradicate – the roots can go as far as ten feet deep, and if even a small portion of root is left in the ground, the entire plant will re – grow in short order. It is illegal in the UK to plant or spread Japanese Knotweed, and when it is pulled up it is legally classified as controlled waste that has to be disposed of by licensed landfill sites. Young shoots of Japanese knotweed are cooked and eaten in some countries – apparently it tastes like super sour rhubarb, but it contains a lot of Oxalic Acid, which is really not very good for you.

The following announcement was published by Bexley Borough Neighbourhood Watch Association and the Metropolitan Police:- "Walk & Talks are open to women aged 18 and above, living or working in London, who would like to go for a walk with an officer in their local area and discuss their views on women’s safety. Those who take part in a Walk & Talk can share their views and experiences with officers as they walk through any areas they may feel vulnerable in. Patrols can take place at any time, including those where there is less footfall, traffic and light so officers can get a real sense of what their thoughts are. The aim of Walk & Talks is to start a conversation between members of the public and officers so we can listen and respond to concerns. Simply click here,  select your borough and book on". 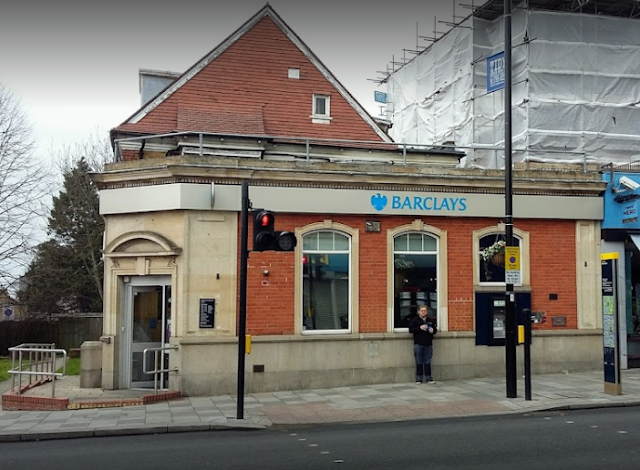 Some more bad news in respect of local bank closures; after Barclays Bank in Erith Riverside Shopping Centre closed for good in February 2021, and Lloyds Bank in Nuxley Road, Upper Belvedere closed in March 2021, another branch is closing - the Barclays in Sidcup is scheduled to permanently close on August 10th at noon. It comes as Barclays revealed that only 265 customers use the Sidcup branch for banking. The bank has considered which other branches can be used nearby before deciding on the closure of any branch. This is concerning; have justified their closures on the increasing use of online banking, claiming customers do not need as many branches. The Financial Conduct Authority has held working groups with major banks to determine how they will maintain access to cash for customers. But a decision has not been reached on what this will entail. How businesses that handle cash will deal with this situation seems to have been overlooked. It would seem that the high street bank is very much endangered. Britain has lost 53 percent of its bank branches since 1989, leaving 1,500 communities with no bank, and another 840 with only one bank remaining. More than 600 branch closures have occurred in the last year alone, and the Swiss bank UBS has predicted that the UK is set to lose another 50 percent of its total branch network in the next ten years. Britain’s major banks would have you believe that this is due to a precipitous collapse in demand for bank branches, and the rise of online and mobile channels for people to access their money. Digital services have undeniably changed the way we engage with our bank, but all the available evidence suggests that not only is there clear and consistent demand for branches declared by the British public, but also that this preference is also born out by people’s actual behaviour too. Studying these industry-focused reports is instructive, because they suggest that far from responding to demand pressures, the major UK banks are simply closing branches in poorer areas and opening or retaining them in more affluent areas – often regardless of demand, or of the impact that a branch closure would have on that area or its population. It occurs to me (and your opinion would be welcomed) that where banks are owned by the public (either wholly, majority or partially), those banks have an explicit moral and financial duty to serve the public interest, which includes ensuring continued banking provision for vulnerable and under served communities. In a report published by the independent think tank, the Social Market Foundation, they outline that whilst a substantial number of bank customers are happy to use online and mobile services for routine transactions and simple issues; By contrast, the researchers found an overwhelming preference to use branches for more complex transactions or big financial decisions – a preference that was matched by people’s behaviour. It has also been alleged that the banks manipulate user statistics to make the branches they want to close look far less well used than in fact they are. Other accusations have also been levelled at banks. One campaigner in Wales whose spouse worked in a branch due for closure recounted the story that the branch staff had been instructed not to process cheques that had been handed in, but instead to post them to the next nearest branch for processing there. The next nearest branch, several miles away and in a more prosperous and wealthy area, was cited by the bank as being more busy than the branch due for closure, despite being in a smaller catchment area and featuring fewer facilities than the branch due for closure. In other words, the bank was intentionally and wilfully manipulating the usage figures in order to justify its predetermined decision to close the branch. I am certainly not implying that any of these underhand tactics were used in the closure plans for Lloyds in Upper Belvedere, or Barclays in Erith or Sidcup, as I have absolutely no information about the details, but it would appear that the bigger picture does contain some questionable behaviour at the least. What do you think? Email me at hugh.neal@gmail.com.
The end video this week is a follow - up to the one from last week; this time transport expert and YouTuber Geoff Marshall visits Abbey Wood Station and tries to work out just how much more quickly journeys on the Elizabeth Line will be when compared with the existing transport infrastructure.
Posted by Hugh at 12:00 pm